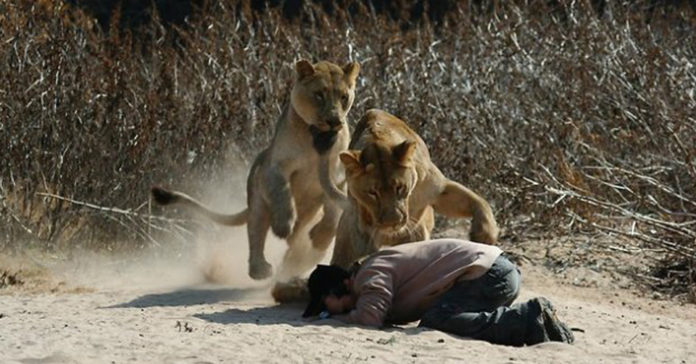 After running straight toward a pride of lions in order to prove the “Lord’s power over animals,” a church leader allegedly had “his buttocks mauled” by a lion.

A Zion Christian Church prophet, Alec Ndiwane was on a safari when he was allegedly attacked by lions. He reportedly provoked them to inspire faith in the members of his church.

The man reportedly fell into a trance and began speaking in tongues before “charging at” a pride of lions in South Africa’s notable Kruger National Park. The man is lucky to have left the scene with his life, because sprinting toward a pride of lions who are busy eating a previous victim is obviously not a good idea. Mr. Ndiwane reportedly began to flee the scene after he realized a miracle wouldn’t exactly save him, but one of the lions bit him straight in the ass first. He didn’t die, he was just literally bit in the ass.

He was saved from even more serious injury and certain death by the game ranger who fired a couple shots from a gun, not at the lions but to scare them off, as reported by GhanaWeb.

“I do not know what came over me. I thought the Lord wanted to use me to show his power over animals.

‘Is it not we were given dominion over all creatures of the earth.” The victim went through emergency surgery at the hospital, got some stitches and was discharged after what seems like not too much time.

However, this entire story may not be true because William Mabasa, a Kruger National Park spokesman reported that park officials are not even aware of such an incident taking place in the park. William Mabasa said: “It would have been reported to us if any of our rangers had taken part in this incident as reported.”