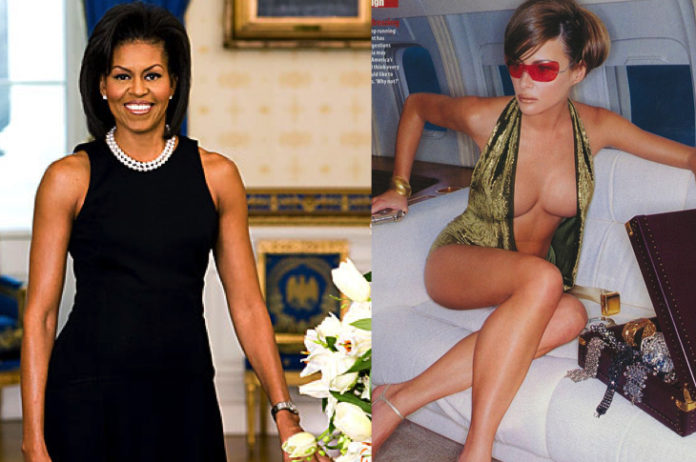 Since Michelle Obama first became the First Lady of the United States, criticism of basically everything about her has been rampant among right-wing voters with racist and sexist undertones. Among this criticism is the accusation that Mrs. Obama “doesn’t look or act” like a First Lady, apparently because of her sense of fashion, which includes sleeveless dresses.

In two famous interviews with Al Shapiro from NPR at Mitt Romney events in 2012, a Virginia voter Bobbie Lussier summed up how Republicans feel about Mrs. Obama’s image. She stated that, “I mean, can you imagine you know, Kennedys or the Bushes or anybody doing pushups on the floor? I mean you know. That’s just not a first lady.” Lussier further said, “They talk about more like her dresses and how she looks and stuff and her arms and whatever. […] You see her walking around in shorts, and you know, just real casual wear.”

So not only is it inappropriate for Michelle to wear sleeveless dresses to any functions or shorts when she’s on vacation in very hot locales, but she is criticized for doing push-ups and encouraging Americans to live a healthy lifestyle. Although Mrs. Obama is one of the smartest and most educated First Ladies of all time, she is constantly put down for her appearance by allegedly religious and conservative voters. Additionally, Jackie Kennedy herself, who was referenced by Lussier, also wore sleeveless dresses.

Melania Trump on the other hand, whose husband is the current front-runner for the Republican party, has received no criticism for not being a suitable future First Lady based on her appearance or history of racy photoshoots. This seems to indicate that the conservative voters were only criticizing Mrs. Obama not because it isn’t “First Lady-like” or because it goes against their conservative, religious views, but simply because she is a Democrat and maybe even because she’s African American and that in itself is not suitable.

Mrs. Trump, who is Donald Trump’s fourth wife, which also seems to have raised no concerns about how that may be a violation of the sanctity of marriage, is a supermodel with a portfolio filled with nude photos. Of course Melania can do whatever she pleases, as it is the 21st century and women should feel free to use their bodies as they see fit, but when it comes to the media silence on these photos and whether she would make an appropriate First Lady compared to Mrs. Obama’s exposed-arms scandal, it raises questions about the true intent of this criticism.

Browse the photos below and tell us what you think! This article (Conservatives Criticize Michelle Obama For Bare Arms, Stay Silent On Melania Trump’s Nude Poses) is free and open source. You have permission to republish this article under a Creative Commons license with attribution to the author and TrueActivist.com.