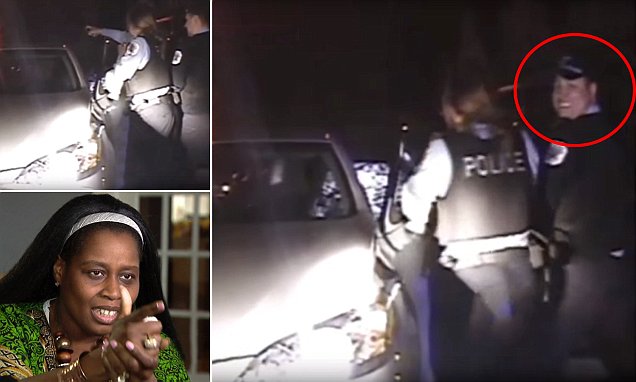 It always seems that Chicago police are involved in every other incident of police violence we hear about in the US. This tale is no different. Catherine Brown, a Chicago Reverend, was attempting to pull into her back alley driveway, when she was obstructed by two crazed Chicago cops. For the mere act of honking her horn at the police cruiser that was driving recklessly, she was pulled from her car, beaten, and then charged with attempted murder.

Brown honked her horn to let the cruiser know she was there. Instead of appreciating the warning, the two cops got out of their vehicle and attempted to pull Brown from hers. In a panic, she calls 911 and asks a supervisor to come to her home. By this point, Officers Michelle Murphy and Jose Lopez have their guns drawn and pointed at Brown and her children, who were also in the car. “It startled me. I reached for my license…The other officer takes the gun and points it at the front of my head,” Brown told the media. At this point, Brown believes that she and her children may be killed if she didn’t act. She put her car in reverse and backed up out of the alley, with the officers chasing after her. She screamed for help, but to no avail. At this time, Officer Murphy is chasing her in the police cruiser. Brown stops her car, but Murphy proceeds to ram her vehicle with the children inside. The officers then pulled her from her vehicle, pepper sprayed her and beat her with their batons, all in the presence of her children. “Beat me down to my underwear, pulled my skirt off. They beat me with the sticks and hit me with their boots in my head.”

The dash cam footage backs up Brown’s story. She is clearly frightened, and the police had no reason to believe she was a threat. Nonetheless, they make no attempts to calm the situation, and were obviously more concerned with her rejecting their authority than the initial incident they must have been responding to at a high rate of speed. At one point, you can see Officer Murphy pepper spray Brown over the top of her open door. This act covered her one year old daughter in the harmful and burning chemical. Despite the dash cam backing up her story, the Chicago Police have refused to comment on it as it is an open investigation.

“Reaffirming our commitment to accountability and integrity is paramount in our efforts to rebuild trust between police officers and communities,” the spokesperson said in a prepared statement. “Since there is pending litigation in this case, CPD is not able to comment on specifics. However, we take allegations of excessive force and discourtesy very seriously. These matters are thoroughly investigated by the Independent Review Authority and individuals are held accountable when wrongdoing is discovered,” the official police statement read. It is unknown if Lopez and Murphy are still on the road, however, it is likely they are. It was also reported that Lopez has had 21 complaints made against him and Murphy had 19. With records like this, it is no wonder they call the Chicago Police their home. Brown was found not guilty of the attempted murder charge but was convicted of a misdemeanor for reckless behavior for driving backwards out of the alley to protect her children. Brown has acquired an attorney and will be filing a federal civil rights violation lawsuit.

This article (Crazed Chicago Cops Arrest Innocent Woman at Gunpoint then Fabricate Attempted Murder Charges) is a free and open source. You have permission to republish this article under a Creative Commons license with attribution to the author and AnonHQ.com.