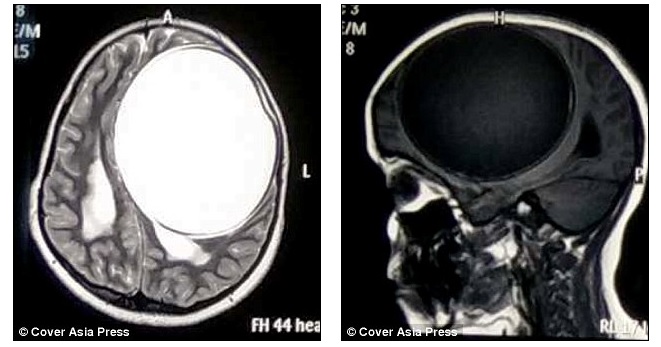 There is a reason why you must treat your pets or cattle with anti-tapeworm medication. And, also keep your surroundings clean.

12-year-old Nita Juggi from western Indian state of Gujarat had been suffering from seizures, headaches and weakness for over two years. Since the last 12 months, she became paralyzed down her right side. After lengthy examinations and MRI scans, doctors found a 12.2cm x 11cm x 9.8cm 675-gram cyst – literally half the size of her brain – in her head. Juggi was eventually diagnosed with neurocysticercosis, a rare parasitic condition in which a person’s nervous system becomes infested with tapeworm.

Dr Chirag Solanki, a Consultant Neurosurgeon at Gujarat’s Sterling Hospital, believed Juggi’s hydatid cyst had been slowly growing for the past eight to ten years.

“As it got bigger, it had more affect on her day to day life and her headaches were getting worse. It had grown to be half the size of her brain. It was very dangerous and there were chances the cyst could have ruptured and killed her at any time.  It’s a bubble so it could burst at any moment.”

A hydatid cyst is a parasite infestation caused by a tapeworm of the genus Echinococcus. It’s often caught by herbivore animals such as sheep or cattle and then transferred to carnivore animals, such as dogs and cats. Humans become infected when they ingest tapeworm eggs from tapeworm-contaminated food or water.  After Juggi’s farmer family found out that their daughter had such a large cyst growing in her head, they were stunned.

“They eventually admitted that they had lived in a very dirty environment and they accepted they had not been very hygienic and that is how she contracted the tapeworm to begin with.” Dr Solanki conducted a two-and-a-half-hour long operation to remove the gigantic cyst from Juggi’s head. Juggi recovered without complications and was discharged from the hospital just two weeks after the life-saving surgery. She is back to loving life and playing with her friends. Juggi’s father states:

“I sold my wife’s jewellery to pay for the surgery. We are very poor and had no other way to pay for it so we had to sell something. I have told the doctor he is like my God. He performed the surgery very well.  My daughter is now back to normal and is doing very well. We make her to do some exercises to keep her fit and we try to support her in every possible way. I thank god that she is better.” This article (Graphic Video: Tapeworm Cyst Half the Size of Brain Removed from Girl’s Head) is a free and open source. You have permission to republish this article under a Creative Commons license with attribution to the author and AnonHQ.com.