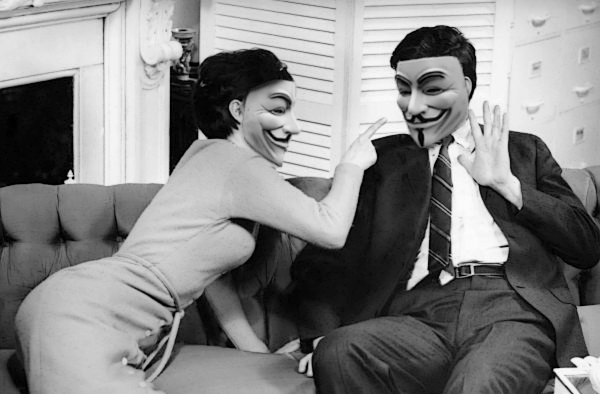 The Christian Science Monitor recently released an article claiming there’s a divide between North American Anons, and those who reside outside of the states. This information seems to derive from a statement made by a self-proclaimed “Anonymous expert” whom few have heard of.

According to the article, the issue began after the Charlie Hebdo killings, and the North American Anon’s interpretation of the incident. Living in a nation known for its false flag attacks, the largest of which many believe happened on our own soil, there were, in fact, many who felt uncertain if this was not also a false flag scenario.

#OpCharlieHebdo ended up being a success, and those at the Christian Science Monitor are claiming it indicates that as the Anonymous movement grows around the world, North America’s cooperative is becoming increasingly detached:

“The North American contingent is increasingly isolated by the rest of the community as Anonymous gains more traction in Europe, Asia, and Latin America.”

It is said that this gap is due to North American Anonymous’ “lack of control over the movement”. Considering the fact that Anonymous is not an organization, and has no leaders, one might be curious as to whom was supposed to be controlling it in the first place. This assumption appears to come from a statement made by one Lorraine Murphy, a journalist who claims to have covered Anonymous for years:

“This type of success [in regards to #OpCharlieHebdo] is indicative of established North American mouthpieces, or ‘the old guard,’ losing their influence over the global collective,” said Lorraine Murphy.

The idea of Anonymous has been encouraged around the world for quite some time, and it’s probably safe to say that many associated with the North American movement look upon the achievements of  those from other nations with a sense of pride. With that in mind, a statement such as Murphy’s can be confusing.

None at AnonHQ have heard of Lorraine Murphy, and upon further investigation it was found this person seems to have little credibility within the Anonymous movement. According to her Linkedin account, she’s currently a journalist at The Intercept, however after reviewing The Intercept’s staff list, she’s nowhere to be found, nor can any articles be found that were written by her—freelance or full-timer.

Her Linkedin account also lists The Cryptosphere as a place of employment, and this is true, but that’s because she’s the founding editor—it belongs to her. After perusing the articles at Cryptosphere—most, if not all of which appear to be written by Murphy herself under the name “Raincoaster”—it would seem that she does not have much of a following. You’ll rarely find a comment under an article, and most often the comments that you do find are made by the authors themselves—basically her. In a self-written article by Murphy, she details an interview she had on the John, Paul and Mic Radio Show, and within the first paragraph of her report she was promoting the “Free Anons Store”:

“For the John, Paul and Mic show, however, I had to be somewhat presentable since it was recorded in Victoria’s tech park development and you know how the chinos-and-expensive-hoodie crowd can be. Consequently I wore my grey flannel pants and my black Anonymous Pirate hoodie from the Free Anons store (where you should just BUY ALL THE THINGS). I even combed my hair. Well, I tried.“

Those who associate themselves with the Anonymous movement stand for a number of beliefs, however consumerism is NOT on the list. After looking into the Free Anons Store, it was found that it has no association to the movement itself, nor do they claim that the proceeds go to charity or any other cause. The website describes the store as “a small Mom & Pop Business located in sunny Florida”, and the website is not SSL protected, so shop at your own risk.

She has associated herself with 2600: The Hacker Quarterly, but no connection was verified. She also has a google account with a small following where she shares her Cryptosphere articles.

There are a couple reports from other organizations that briefly quote her, and that’s including the article from The Christian Science Monitor, but otherwise, there isn’t much known about her with regards to her connections to the Anonymous movement—aside from reporting on twitter feeds at her website and being a “devoted fan” of the cause.

While all initiatives to help with the movement are encouraged, there is no way any one person can speak for Anonymous itself. Particularly in terms of nations, since there is no standard system of beliefs. There are millions of people in North America alone—of many ethnicities—who recognize themselves as Anonymous, not to mention the many other millions around the world. To speak for all of them is an impossibility.

According to the article, part of the blame for “America’s inability to control the Anonymous movement” is due to a “general lack of cultural and political knowledge as it pertains to causes that are not directly connected to US affairs,” says Raymond Johansen, a global privacy activist on the #FreeAnons “Advisory board” on Twitter.

Again, it should be noted that there is no organization to control.

Putting aside the fact that the U.S. government has had a hand in nearly every case of corruption around the world, as the Anonymous movement spreads to the various areas of the globe, it is hoped by many that the citizens of those nations will take a direct role in standing against the issues their countries face, as well as the global issues that affect all of us. At the same time, as the United States is dealing with in an increasingly harsh police state, it is to be expected that many Americans are going feel particularly passionate about those issues that directly pertain to them.

Yet another argument made by The Christian Science Monitor to support North America’s “loss of influence” over other Anon groups was Edward Snowden’s revelations about mass surveillance conducted by the NSA. According to the report, the NSA’s actions have had a negative effect on North American Anons’ reputations as most people see Americans in general as “snitches”. The article only states that this information comes from “an influential and longtime Anonymous source in Europe,” and no additional cited-sources were provided with the article.

In conclusion, those at The Christian Science Monitor state:

“The combination of NSA leaks and Sabu’s unmasking as an informant has sidelined the US among the global Anonymous network. If the US government’s intention was to discredit and impede American hackers and activist within Anonymous, it worked.”

With the lack of cited sources, as well as testimonies based off the assumptions of self-proclaimed “experts”, and references to unknown sources in which the reader is forced to trust that the author’s contact is reliable, it does seem there’s an intent to discredit the American Anonymous movement. However in this particular case, the US government isn’t to blame. Just a profiteering pundit.