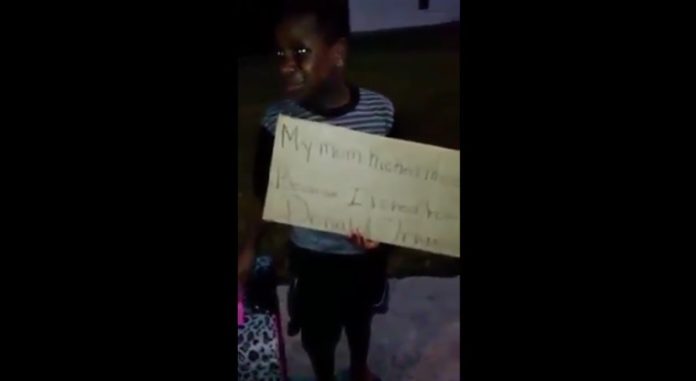 In a cold and calculating manner, a mother tells her son, Elwood, who can’t be more than 8-years-old, to take his things and leave the house – never to return home. Why? Because the young child voted for Donald Trump in a school activity.

The child’s clothes have been packed, waiting by the door, as the terrified child is forced to wheel his luggage out, crying as he walks down the street at night, with the mother initially locking the door behind her begging son.

What can only be construed as child abuse and serious neglect against what the mother calls a “Donald Trump lover,” the mother continues to film the heartbreaking, gut wrenching scene in a neighbourhood street, ignoring the pleas of a younger sibling wanting for their older brother.

A sign, which the child was forced to carry, stated “My mum kicked me out because I voted for Donald Trump.” The child’s name is mentioned in the clip as “Elwood.”

The 2:16 clip isn’t for the faint hearted, but please share it in hopes of discovering this mother’s identity, so that we can name her shame to both the public and to authorities.

Originally, this clip was discovered and posted on Twitter by Barry Cunningham, asking for anyone to come forward, who may know this woman’s identity.

A simply disgraceful act by a mother, who’s instinct is obviously lacking.

This article (Help Find This Woman! Mother Kicks Little Boy Out of Home in Act of Child Abuse) is a free and open source. You have permission to republish this article under a Creative Commons license with attribution to the author AnonWatcher and AnonHQ.com.