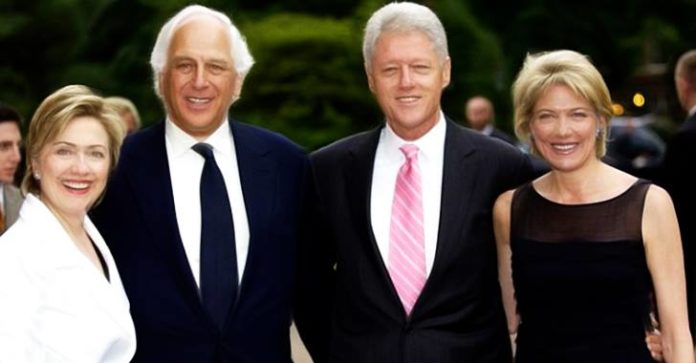 As Zero Hedge reported a few days ago, Bill and Hillary Clinton spent Friday night in Martha’s Vineyard celebrating Bill’s 70th birthday (posted here). We’re sure it was a grand affair, well worth the heat Obama had to take from Louisiana flood victims to attend.

Turns out the following morning, Hillary, not one to be bothered with traditional peasant forms of travel, awoke and took her private jet just 20 miles over to Nantucket where the Rothschilds will be hosting a fundraiser. The event is open to all…well anyone who can afford the $100,000 per person price tag. Hopefully this is a sign that the whole global warming thing has been solved and we can all rest comfortably at night knowing that we’re safe from sudden, violent attacks at the hands of ManBearPig.

But we can’t really blame her, it’s exhausting running around the country to places like Cleveland, Ohio letting factory workers know how “hard” you’re working to make the “rich” pay their fair share.

But not ones to let facts get in the way of a good narrative, we’ll just ignore that pesky little post where we recently pointed out how the Rothschilds are using Nevada as a tax haven for wealthy international investors to avoid taxes (see “Rothschild Humiliates Obama, Reveals That “America Is The Biggest Tax Haven In The World””):

Rothschild, the centuries-old European financial institution, has opened a trust company in Reno, Nev., a few blocks from the Harrah’s and Eldorado casinos. It is now moving the fortunes of wealthy foreign clients out of offshore havens such as Bermuda, subject to the new international disclosure requirements, and into Rothschild-run trusts in Nevada, which are exempt.

* * *
For financial advisers, the current state of play is simply a good business opportunity. In a draft of his San Francisco presentation, Rothschild’s Penney wrote that the U.S. “is effectively the biggest tax haven in the world.” The U.S., he added in language later excised from his prepared remarks, lacks “the resources to enforce foreign tax laws and has little appetite to do so.”

We’re sure this fundraiser was just a convenient opportunity for Clinton to discuss with the Rothschilds how to eliminate the many tax protections afforded to her Billionaire friends.

This article (Hillary Just Took A Private Jet For 20 Mile Ride to Rothschild Fundraiser) by Tyler Durden originally appeared on ZeroHedge.com and was used with permission.