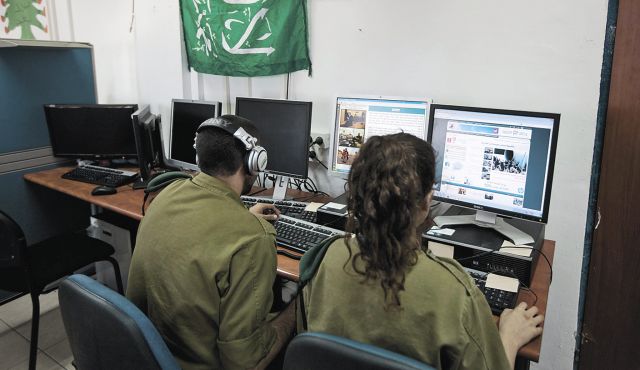 Several active and former members of an elite Israeli intelligence unit have declared their denial to spy on Palestinians in the occupied territories, quoting excessive hard done to innocent people and harmful effects on the country’s (Israel’s) security.

It was reported by The New York Times that the Israel Defence Forces (IDF) on Sunday terrorized disciplinary action against 43 veterans and active reservists from Unit 8200, an elite corps responsible for collecting signal intelligence and code decryption, after they drafted a letter in which they stated their denial to spy on Palestinians.

The countersigners, which included a major and two captains, mentioned something what they called:-

“Our moral duty to act”

As they wrote that they are refusing to perform their appointed duties due to Israel’s “political harassment” of Palestinians. “We, veterans of Unit 8200, reserve soldiers both past and present, declare that we refuse to take part in actions against Palestinians and refuse to continue serving as tools in deepening the military control over the Occupied Territories”

The letter continued with:-

“However, our military service has taught us that intelligence is an integral part of Israel’s military occupation over the territories.”

The deeds of Unit 8200 “harms to innocent people,” according to the letter, which claims that the intelligence gathered is used for political torture and to make separations in Palestinian society by hiring spies and driving parts of Palestinian society against itself.

The letter included that “Israel’s torture does not allow people to lead normal life and adds more violence.”

The rebellious Israelis also wept that while under investigation of Israeli citizens is severely limited, “the Palestinians are not afforded this protection.”

I don’t feel comfortable in my conscience continuing to serve,” wrote a reserve captain named Daniel.

“I don’t feel comfortable in my conscience continuing to serve,”

“We have to take responsibility,”

“In the end, I served there for seven years… I must take responsibility for what I see as the perpetuation of the cycle of violence. We hope that people will think critically about these things.”

The letter marked the first public collective refusal to serve by Israeli intelligence officers and was not motivated by Israel’s recently taken Operation Protective Edge bombardment and invasion of Gaza, which was tossed in response to thousands of rockets that were fired into Israel by Hamas and other radical Palestinian resistance groups.

“The IDF is the most moral army in the world and it carries out the missions that we give it to safeguard our security,”

“From my long years of acquaintance with the members of Unit 8200, the baseless slander levelled against them will not harm the vitally important work they do for the nation’s security. And I say to them — continue.”

On Sunday, IDF orator Brig. Motti Almoz posted on his Facebook page that the rebellious troop’s denial to server was a major offense and that “the disciplinary treatment would be sharp and clear.”

Adnan Damiri, an orator for the Palestinian Authority’s security services, addressed the Israeli letter as “humanitarian” and a “moral move,” Haaretz reports.