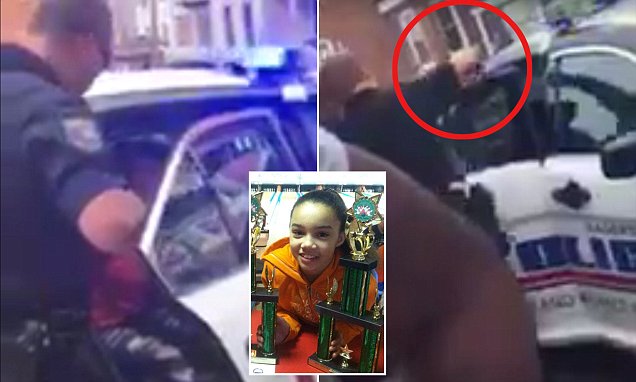 The latest viral video of police brutality comes from the Hagerstown Maryland Police Department. According to reports, a fifteen year-old girl was knocked off of her bike by a vehicle but was uninjured. She didn’t want to talk to the cops, but in police state America, being a victim of a crash is enough for them to detain, throw you against a wall and pepper spray you. The family has hired a lawyer and is planning on filing a suit against the police department for their brutality. The girl was involved in a minor accident with her bike. More accurately she was bumped off of her bike by a car while she crossed the street at a red light. When police arrived, she advised them that she was OK and just wanted to go home. When the police asked her for her parents’ information, she refused to give it. She then tried to ride away on her bike. Despite not wanting to do anything about the crash and advising she wasn’t uhrt, police proceeded to detain her for not providing her information. From a law enforcement perspective, they had every right to detain the girl, as she was a minor who may per policy need to go to a hospital for evaluation. She was wrong in not wanting to cooperate, as they did only have her best interests at heart. The problem, as we have seen time and time again, is that the response by police was not proportional to the amount of resistance they are encountering.

The girl was five foot tall and one hundred five pounds. Police could have easily gained control of her without having to slam her against a wall and then repeatedly pepper spray her. The video that has flooded the internet and has even been shown on MSM outlet CNN, shows police spraying the burning chemicals into the eyes of a calm and restrained teenage girl. The police then close the back door, effectively sealing her in a mini gas chamber. Chief Victor Brito adamantly defended his officers, not differentiating between the need to use force on violent suspects and the fifteen year old girl in question. He failed to address the hypocrisy of police on scene who claim to be looking out for the girl’s safety and well being after the crash, yet slam her against a wall a moment later. The chief said that the officers attempted to de-escalate the situation, however, the video does not show this.

The names of the girl and her family were not released, however, the family lawyer Robin Ficker has been quite vocal about the case. “This little girl, 5 ft. 105 lbs, was brutalized by Hagerstown police after, she, on her bike, was hit by a car, but refused medical treatment. They slammed her against a wall, arrested her for refusing treatment, maced her 4 times in the police car while handcuffed, and took her to the police station instead of the hospital!” The girl’s mother was angered over the incident. “You don’t take a 15-year-old child, and put them in handcuffs, and shut a door, and mace them four times. Why was she not transported to the hospital? Why?” The officer spraying a compliant teenage girl through the window of his cruiser.

Of course to cover their tracks, the officers had to fabricate a charge of disorderly conduct. According to reports, they also charged her with possession of a small amount of marijuana. The conduct demonstrated by police was not appropriate for dealing with a fifteen year-old girl. The actions taken by these officers shows that they only have one solution for every problem; force.