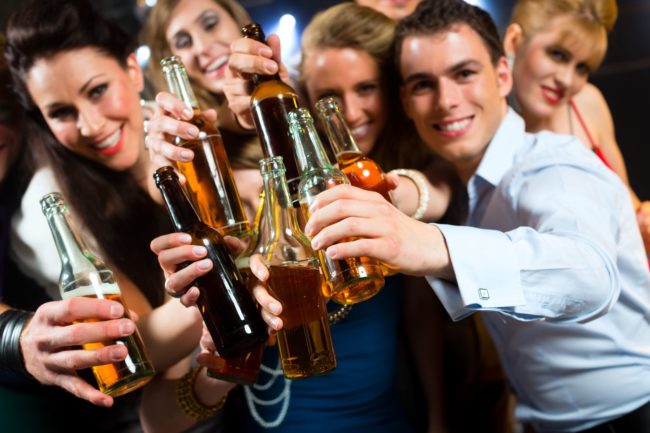 In a society where marijuana is persecuted and alcohol is socially celebrated, the National Cancer Institute is amazed to find that 9 out of 10 people are completely unaware that there are direct, established links between alcohol consumption and cancer.

While society is completely bombarded by countless commercials casting alcohol in a positive light, health experts are trying to their best to combat “widespread public ignorance about how closely alcohol and cancer are connected.” We all know, at least I think, that alcohol literally consists of liquid from rotted, fermented organic matter – alcohol is literally poison to the body, this is why it “F*cks you up.” As if this is not enough to turn you off, and apparently it is not, research conclusively indicates that alcohol is a carcinogen – known to cause 7 different forms of cancer.

The study, published in the The Scientific Journal of Addiction, concludes that “There is strong evidence that alcohol causes cancer at seven sites in the body and probably others. Current estimates suggest that alcohol-attributable cancers at these sites make up 5.8% of all cancer deaths world-wide.” Going on to add that “alcohol increases the incidence of each type of cancer.” Not surprisingly, just like anything else, the more you drink, the higher your risk of developing cancer.

Meanwhile, alcohol kills over 88,000 Americans each year – nearly 3x times the amount of people killed each year by guns. But where is society’s outrage? Just last week, President Obama just announced a new 1.1 billion dollar initiative to fight America’s “heroine epidemic,” despite the fact heroine only killed just over 10,000 people in 2015 – 78,000 less than alcohol.

So, why isn’t our government doing anything to fight the ‘alcohol epidemic’ in America? Might it have something to do with the fact that alcohol tax revenue netted the government 9.6 billion dollars last year?

This figure dwarfs in comparison to the revenue generated from alcohol corporations themselves, and the money they give to television networks to market their product. So if you had any question as to why 9 in 10 people in society are ignorant to, sheltered to the fact that alcohol causes cancer, just follow the money and it will all make perfect sense.

This article (National Cancer Institute: ‘Widespread Ignorance, 9 in 10 People not Aware Alcohol Causes Cancer’) is a free and open source. You have permission to republish this article using a creative commons license with attribution to the author and AnonHQ. Join the conversations at www.anonboards.com.

Oxford Scientist Explains Why Starting Work, School before 10 AM is Torture