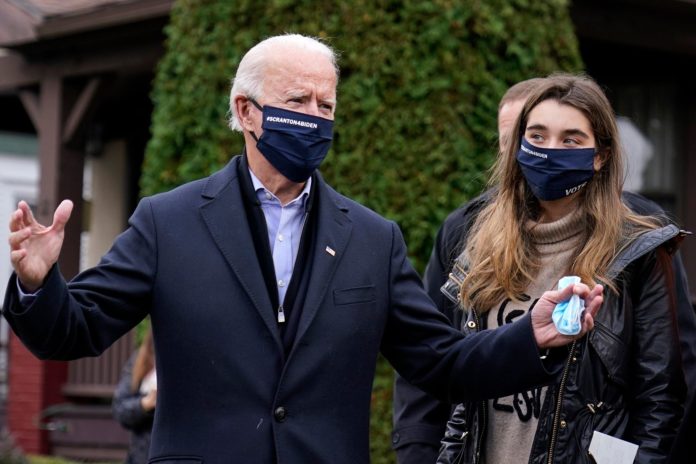 Joe Biden didn’t slow down on the campaign trail on Tuesday, making a few key stops in Pennsylvania, including Philadelphia. During his visit in the City of Brotherly Love, Biden was caught on camera making quite the slip-up when talking about some of his family members.

“I want to introduce you to my grandchildren,” Biden began to tell the crowd through a megaphone. “This is my son, Beau Biden, whom a lot of you helped to elect to Senate in Delaware.” The former Delaware Attorney General was diagnosed with a brain tumor and passed away in 2015. Biden continued, “This is my granddaughter, Natalie.” That’s when he realized the error he made as he was overheard saying, “No wait, we got the wrong one.” Natalie, as he clarified, is the daughter of Beau. The clip went viral across social media as many pointed to Biden’s slip-up as a sign of weakness, claiming that his opponent, Donald Trump, has continued to push onto his supporters.

There were plenty of Biden supporters in the comments sticking up for the Democratic candidate. One response read, “Obviously he meant to say it was his son Beau Biden’s daughter, and got mixed up. He visited Beau’s grave this morning, and he’s understandably the most nervous today that he’s ever been.” On the flip side, another user was turned off by Biden’s apparent mental lapse, “Beau has been dead for five years. The man clearly has a cognitive issue and shouldn’t be anywhere near politics yet alone the Oval office.” Many others took this stance as another commented, “I was never voting for this guy but my gosh it hurts to watch how his mental decline is out there for everyone to see… very, very sad to watch at this point.”

Trump has gone on the attack about Biden’s cognitive capability. One example was a few days before the first debate in Pittsburgh at one of his rallies when he said Biden “doesn’t have a clue.” He continued to go down that route for much of his upcoming rallies. “He’s a dumb guy,” Trump claimed. “Always known as a dumb guy. But we look forward to seeing him in the debate.”

Americans across the country are weighing in after voters on Tuesday approved a new Mississippi flag. The new design, which features a magnolia and the phrase “In God We Trust,” replaces the state flag that had been flying throughout the state for 126 years that incorporated a version of the Confederate battle flag.

According to NBC News, the new flag was on the ballot on Election Day and received 68% of the vote as of Tuesday night. “The New Magnolia” was designed by graphic artist Rocky Vaughan and features the state flower, which is on a dark blue background with red bars on either end, encircled by stars representing Mississippi as the 20th state. A gold five-point star is also on the flag to reflect Mississippi’s indigenous Native American tribes.

The design had been created after state lawmakers in June voted to replace the original flag. “The New Magnolia” was selected among 3,000 submissions. The design, according to the Department of Archives and History, “represents Mississippi’s sense of hope and rebirth, as the Magnolia often blooms more than once and has a long blooming season.”

While “The New Magnolia” has unsurprisingly been the topic of conversation in the state of Mississippi, as Mississippians officially approved the design on Tuesday, it became the talk throughout the country, as Americans weighed in on social media. Scroll down to see what people are saying.

I really like the new Mississippi flag. It actually might be the nicest state flag out there. pic.twitter.com/bshvTZ5zdo

The flag had been the center of controversy for some time, and a statewide vote in 2001 resulted in the majority of voters choosing to keep the original flag. The push to replace the flag, however, was reinvigorated in 2020 amid nationwide protests following the police killings of several Black men, including George Floyd.

In June, a group of bipartisan lawmakers started to draft a resolution to change the state’s flag. At the time, the Mississippi Baptist Convention said that “the racial overtones of the flag’s appearance make this discussion a moral issue. Since the principal teachings of Scripture are opposed to racism, a stand against such is a matter of biblical morality.”