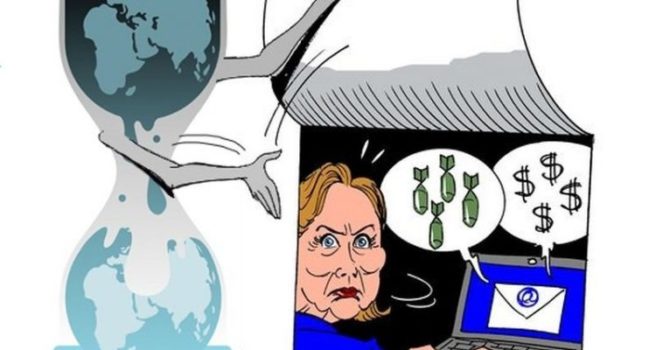 Last month, Julian Assange promised to release enough information to indict Hillary Clinton if the U.S. government failed to do so on their own. He is a man of his word. This week, WikiLeaks published 1,258 of Hillary Clinton’s personal emails – the bulk of which covers her time as Secretary of Defense during the Iraq War. More emails related to the British Chilcot conflict, in relation to Britain’s involvement in the war, are allegedly set to be published later this week.

The latest leak follows the Monday after Hillary Clinton was formally interviewed by the FBI for the first time. Despite investigating Clinton’s email server for the last 11 months, at a cost of $20.5 million dollars, the FBI’s key meeting with the primary suspect lasted only 3 and a half hours. Just hours after the conclusion of this meeting, anonymous sources reported to MSNBC that no charges would be brought against Hillary Clinton for her role in the affair and the whole matter was essentially over.

No sooner than this news broke, we have the emergence of Julian Assange, following through on his promise from last month. It will take weeks, perhaps months for journalists to sift through all the information released in the emails today; but what makes these emails particulary interesting, is the period of time from which they reference.

It seems like ancient history to most people at this point, but Hillary Clinton served as our Secretary of Defense from the time President Obama first took office in 2009, through to 2013. You may or may not remember, we pulled our last “combat troops” from Iraq and ‘ended the War’ in 2011. You may also remember that these decisions directly or indirectly effected the events we now witness today.

To put it more bluntly, Hillary Clinton served as our Secretary of Defense over the same exact window of time that the Islamic State rose to power in Iraq. Now, thanks to WikiLeaks, we have over 1,000 of her personal emails related to this same period of time. Will the information be damning enough to make her step down or thrown in jail, as Assange suggests? Only time will tell. For the time being, you are welcome to browse through her personal email history for yourself.

This article (WikiLeaks Publishes Over 1,000 Clinton Emails from Iraq War Era) is a free and open source. You have permission to republish this article using a creative commons license with attribution to the author and AnonHQ. Join the conversations at www.anonboards.com