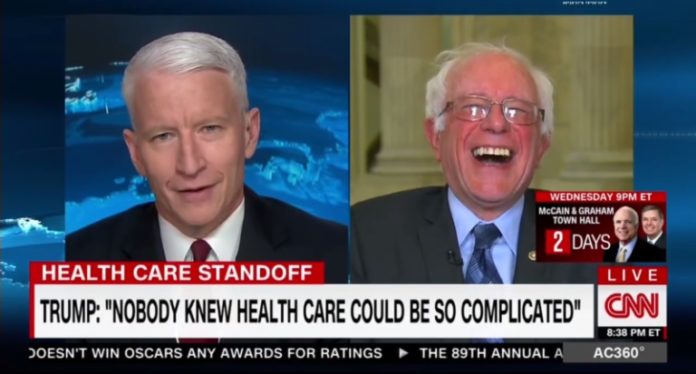 Sanders couldn’t hold back laughter when presented with the claim that “nobody knew health care could be so complicated.”

One of the most appealing promises made by Bernie Sanders’ during his campaign, which appealed to folks of every background, denomination, and ethnicity, was the pledge to guarantee health care for all. Having advocated for such while in office and even as an activist beginning in the 60’s, he’s well-aware that the issue is complicated. However, he still maintains that access to life-saving medical services is a right – not a privilege.

Knowing this, it makes sense why the Vermont Senator bust out laughing in response to a claim made by Donald Trump. Though the new U.S. President’s frustration with the matter is understandable, the fact that he claimed “nobody knew health care could be so complicated” was just seen as funny to Sanders. In an interview with Anderson Cooper on Monday’s AC 360, Sanders stated:

“When you provide health care in a nation of 300 million people, yeah, it is very, very complicated,” he continued. “And maybe now, maybe the president and some of the Republicans understand you can’t go beyond the rhetoric, ‘We’re going or repeal the Affordable Care Act, We’re going to repeal Obamacare and everything will be wonderful,’ a little bit more complicated than that.”

“Let’s get beyond rhetoric,” the senator concluded.

Watch the CNN clip below:

This article (Bernie Sanders Busts A Gut Laughing At Claim That ‘Nobody Knew Health Care’ Is So Complicated) is free and open source. You have permission to republish this article under a Creative Commons license with attribution to the author and TrueActivist.com