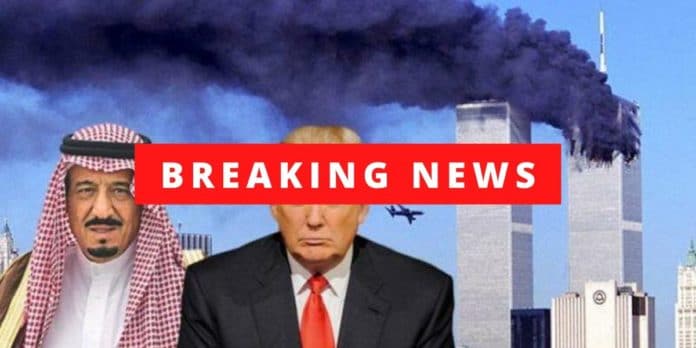 It’s being called “a complete government cover-up of the Saudi involvement” according to 9/11 victims’ families who are in a lengthy ongoing lawsuit seeking to expose Saudi involvement in the 9/11 attacks and US efforts to cover it up.

A new bombshell has been dropped which the families of victims are hailing a huge success: FBI court documents inadvertently left a key Saudi embassy official’s name unredacted, revealing one of the government’s most sensitive secrets regarding the September 11 attacks and state sponsorship.

A Yahoo News exclusive reveals, based on what has since been admitted as “a giant screw-up,” the identity of “a mysterious Saudi Embassy official in Washington who agents suspected had directed crucial support to two of the al-Qaida hijackers.”

Ironically the ‘accidental’ release of the information was related to filings by Attorney General William Barr and acting Director of National Intelligence Richard Grenell to get information pertaining to the kingdom’s role in the attacks permanently banned from public access, citing the usual “state secrets” and national security concerns.

The FBI mistakenly revealed the identify of a top Saudi embassy official who had continuing direct contact with individuals involved in running the Los Angeles al-Qaeda terror cell which produced some of the hijackers: his name is Mussaed Ahmed al-Jarrah.

Al-Jarrah was an official diplomat of the Saudi foreign ministry and embassy in D.C. who oversaw Ministry of Islamic Affairs employees at Saudi-funded mosques and Islamic centers throughout the US from 1999 and 2000. Crucially he’s been revealed as a key “link” between the Saudi government and the Los Angeles cell, specifically two terrorists which went on to fly a plane into the Pentagon.

The Yahoo News report describes the huge significance of the Al-Jarrah revelation as follows:

Fahad al-Thumairy, a Saudi Islamic Affairs official and radical cleric who served as the imam of the King Fahd Mosque in Los Angeles and Omar al-Bayoumi, a suspected Saudi government agent who assisted two terrorists, Khalid al-Mihdhar and Nawaf al-Hazmi, who participated in the hijacking of the American Airlines plane that flew into the Pentagon, killing 125.

After the two hijackers flew to Los Angeles on Jan. 15, 2000, al-Bayoumi found them an apartment, lent them money and set them up with bank accounts.

A redacted copy of a three-and-a-half page October 2012 FBI “update” about the investigation stated that FBI agents had uncovered “evidence” that Thumairy and Bayoumi had been “tasked” to assist the hijackers by yet another individual whose name was blacked out, prompting lawyers for the families to refer to this person as “the third man” in what they argue is a Saudi-orchestrated conspiracy.

That “third man” is newly revealed by the FBI ‘mistake’ as Al-Jarrah — believed to have “tasked” intermediaries to assist some among the 9/11 hijackers.

Current and former FBI officials speaking on anonymity have said that top leaders at the bureau have sought to quash this whole investigation from the start. “There were definitely people at FBI headquarters who wanted this closed,” one former official told Yahoo.

Relatively little is known about Jarrah, but according to former embassy employees, he reported to the Saudi ambassador in the United States (at the time Prince Bandar), and that he was later reassigned to the Saudi missions in Malaysia and Morocco, where he is believed to have served as recently as last year.

Jarrah has been on the radar screen of the lawyers for the 9/11 families for some time and is among nine current or former Saudi officials who they suspect have important information about the case and have sought to either question them or get access to FBI documents that mention them.

The families have also tapped former agents to help investigate the activities of the potential witnesses, including Jarrah.

Jarrah “was responsible for the placement of Ministry of Islamic Affairs employees known as guides and propagators posted to the United States, including Fahad Al Thumairy,” according to a separate declaration by Catherine Hunt, a former FBI agent based in Los Angeles who has been assisting the families in the case.

Hunt conducted her own investigation into the support provided to the hijackers in Southern California. “The FBI believed that al-Jarrah was ‘supporting’ and ‘maintaining’ al-Thumairy during the 9/11 investigation,” she said in her declaration.

Musaed Ahmad Al-Jarrah (pictured above left, and below), former Saudi Foreign Ministry official assigned to the Saudi embassy in Washington, DC between 1999 and 2000.

A spokesman for the 9/11 families whose father was killed in the attacks, Brett Eagleson, said of the Jarrah revelation that ultimately it confirms a Saudi chain of command behind 9/11 which goes direct to the Saudi embassy in D.C.

Below: Prince Bandar bin Sultan, Saudi Ambassador to the US, speaking to former President George W Bush at the Bush Ranch in Crawford, Texas, in August 2002. An ‘indirect link’ between Prince Bandar and an al-Qaeda suspect is revealed in a 9/11 investigatory report. Al-Jarrah reported directly to Prince Bandar, who later became Saudi intelligence chief and kingdom’s national security council head.

“It demonstrates there was a hierarchy of command that’s coming from the Saudi Embassy to the Ministry of Islamic Affairs [in Los Angeles] to the hijackers,” Eagleson said.

And no doubt there’s still a mountain of evidence kept secret by the US government concerning the real 9/11 story. At this point we’re still surely at the mere tip of the iceberg as the official narrative continues to unravel even by the mainstream media’s belated admission (whereas in prior years any critical approach to official Washington’s 9/11 mythology got one dismissed as ‘conspiracy theorist’ and ‘truther’ etc..).

Given the 9/11 lawsuit driven by victims’ families is nowhere near finished, it is likely to slowly chip away and wrest more damning information from the feds.