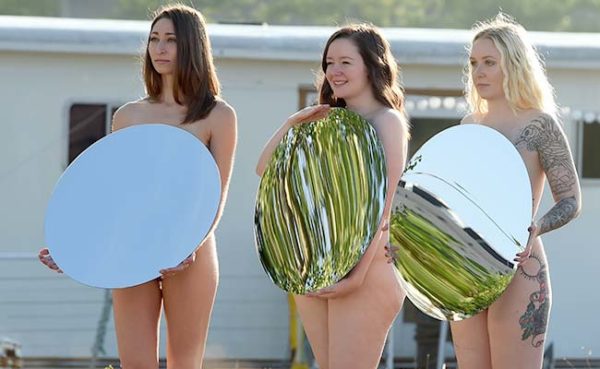 During the National Convention of the Grand Old Party (GOP), to officially confirm Donald Trump as the person who will lead the party into the November elections, about 130 women staged a naked protest against the billionaire.

The Republic National Convention started on Monday, July 18 and ended on Thursday, July 21 in the city of Cleveland, Ohio.

The AFP news agency reports that the women stripped naked with only mirrors to cover their genitals. The women reportedly staged the protest in that manner, after photographer Spencer Tunick appealed to them to blend art with politics and portray Trump as unfit for the White House. The weird protest saw women of all shapes, colors and sizes participating, holding up mirrors and attempting to near the Quicken Loans Arena, where the GOP Convention was being held. Mr Tunick is said to be an expert in shooting nude photos. 130 women responded to his appeal.  Because nudity is illegal in Cleveland, the women staged the naked protest at a private property close to where the Convention was taking place. The police were not able to intervene because it was held on a private property, which the owner agreed for the women to use for the protest.

The naked women titled the protest “he is a loser,” reminding people that Trump is a divisive person and will isolate the United States from the rest of the world if elected.

Mr Tunick said he will select about 100 of the nude photos he has taken, featuring them in a special photo album before the November 8 election takes place. According to Tunick, the album will be titled “Everything She Says Means Everything.”

Tunick wrote on his personal website that the mirrors the women held, reflected the knowledge and wisdom of progressive women and the concept of ‘Mother Nature’ onto the convention center, cityscape and horizon of Cleveland. He further revealed the nude protest is his most political shoot ever, feeling compelled to take action because Trump is a dangerous person to deliver America into his hands. He said voting against Trump at the ballot box in November, wasn’t enough for him.

“I have two daughters and a wife. I can’t believe the language and rhetoric of hate against women and minorities coming from the Republican Party.” Tunick added that he had to do something to counter what he described as the idiotic thinking of Trump, in order to save America.

Among the naked women was an art professor, MaPo Kinnord who openly granted interview to the media after the protest. She said she took part because she loved Tunick’s work and that there is no way better to protest against Trump, than being naked. “To be totally naked and out in the open and to be fearless is what we need to be,” Kinnord said. Trump has stirred controversy since announcing his candidacy for the GOP. In an interview in 2015, he called for a ban on Muslims entering the United States, and a wall to be built on the Mexican border to keep out illegal immigrants.

These comments were widely condemned around the world. Even within the GOP, some believe Mr Trump is unfit for president. Senator Ted Cruz, who also contested for the party’s ticket to become president, and later dropped out, refused to endorse Trump during the Convention. But that notwithstanding, Trump has been overwhelmingly endorsed by majority of GOP members to lead the party to the White House on November 8.

This article (130 Women Pose Naked Against Donald Trump During GOP Convention in Cleveland) is a free and open source. You have permission to republish this article under a Creative Commons license with attribution to the author and AnonHQ.com.