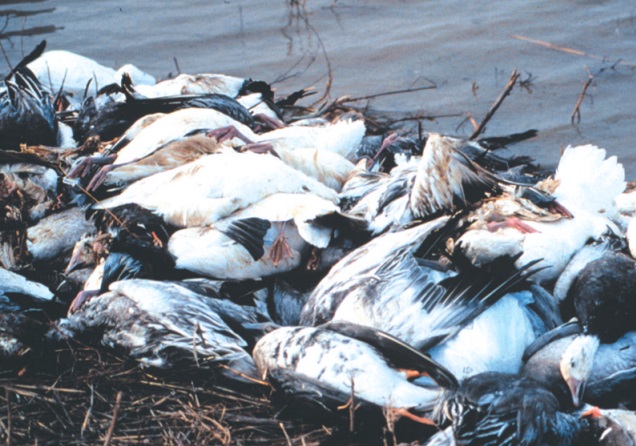 Officials believe the birds were killed by avian cholera; volunteers and the Idaho Department of Fish and Game (IDFG) staff members had collected the carcasses of about 2,000 migrating snow geese that died mid-flight.

Avian cholera is a contagious bacterial disease that is characterized by large die-offs, but should not be the assumed explanation for suspiciously large groups of birds dying mid-flight.

The deaths of most of these birds should have occurred on the ground, having become too ill to take flight in the first place. With 2,000 birds being able to take flight and then suddenly dying at once, it stands to reason that they might have been exposed to some form of pollutant in the range of their flight-path.

“The sudden appearance of large numbers of dead birds in good body condition with few if any sick birds is observed,” the US Geological Survey said. “Death may be so rapid that birds literally fall out of the sky or die while eating with no previous signs of disease. Sick birds appear lethargic, and when captured may die within minutes.”

Instead, because healthy birds dying at once seems to characterize a rather broad range of potential causes of death, one wonders if this has anything to do with the recent expansion of fracking in the region, with some wells located near Payette River Wildlife Management Area according to activists. The Payette River is known for its large variety of bird species, including waterfowl. Further, fracking is taking place near other nature reserves. Could this have anything to do with the die-off? Anyway, back to what the mainstream experts have to say on the matter.

“Outbreaks of avian cholera have occurred sporadically in the region over the past few decades,” IDFG Upper Snake Regional Supervisor Steve Schmidt said in the statement.

“The important thing is to quickly collect as many of the carcasses as possible, to prevent other birds from feeding on the infected birds,” Schmidt added.

About 20 bald eagles were seen near areas where snow geese carcasses littered the ground but a lengthy incubation period makes it unclear if the eagles were infected and would carry the ailment elsewhere, said Losinski.

A team of University of Idaho researchers studied geese more than a decade ago, and found that less than 5 percent of healthy wild birds were carriers of the avian cholera bacteria.

More than 10,000 migrating birds died of avian cholera in Oregon in April 2012, with snow geese and northern pintails being the most affected species. A similar die-off occurred with eared grebes and bald eagles in Utah in late 2013, with the grebes falling from the sky in November and the eagles, which prey on smaller birds, dying in December, NBC News reported.

IDFG is asking anyone who observes dead birds to report them to the Upper Snake Regional Office. The deceased animals should not be handled because of the potential to unintentionally distribute the disease to other wildlife, the agency claimed; or, perhaps they don’t want independent researchers to reach different conclusions regarding the sudden aerial massacre.