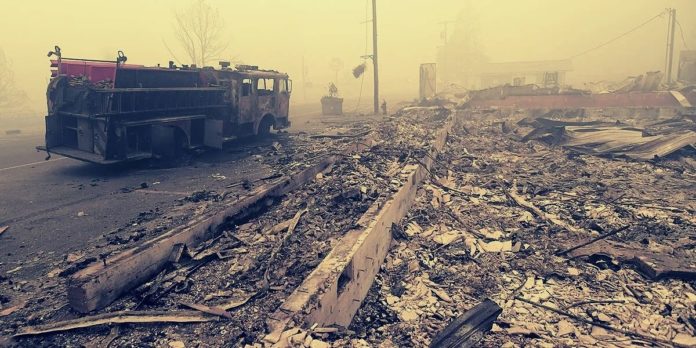 Over a million acres have burned in Oregon, displacing thousands of people in what officials describe as a “perfect storm.”

As the West Coast continues struggling to control devastating fires, the small city of Detroit, Oregon, which lies roughly 120 miles southeast of Portland, has been destroyed by the fires so comprehensively that it “looks like a bomb went off,” according to local residents.

The flattening of the rural town comes as Oregon State Police have deployed the first-ever mobile morgue in expectation of what officials have warned over the weekend could be a “mass fatality incident,” with at least 10 deaths confirmed and another 50 people unaccounted for.

The small city of Detroit, which has a population of about 210 residents, is only one of multiple towns that have been devastated by the unprecedented wildfires that have spread across western Oregon, forcing tens of thousands to be evacuated and displacing countless people as thousands of homes have been reduced to ashes.

“We have approximately 20-25 structures still standing, and the rest are gone,” the Idanha-Detroit Rural Fire Protection District announced on Facebook.

Detroit’s City Hall, which also serves as the district office for the local fire department, was one of the many buildings consumed by flames.

“Our primary focus is protecting the structures that are still standing,” officials said. “Several of our firefighters have also lost their homes. They are working through their own losses while also fighting to protect homes still intact.”

Sandi Elwood, who grew up in Detroit, was horrified when she drove into town to assess the damage. Multiple buildings were utterly annihilated by the fires, including her old church, the bar where she once worked, the marina where she would hang out during the summer, as well as her mother’s home and those belonging to countless others.

Her mother, who was evacuated from the city, still hasn’t seen the scorched ruins of her hometown – but is feeling numb nevertheless.

“The reality will probably hit her when she’s standing on her property,” Elwood said.

Elizabeth Smith was another Detroit local whose every possession was lost when the wildfire swept through the town.

“Our homes are absolutely destroyed,” Smith told KATU. “I’ve seen a few videos and photos and my lovely little house that we remodeled 12 years ago in this beautiful canyon area is absolutely flattened. It looks as though a bomb went off.”

The small community had gone from no evacuation order to an urgent level three “go now” mandatory evacuation notice in a matter of only a few hours. Some residents remain frustrated by the poor communication.

“I’m not going to blame anybody. It’s what it is,” said Detroit Mayor Jim Trett. “But yeah, we would have liked to have more of an alert. But I can’t blame anybody because this thing just came like a freight train.”

The mayor compared the explosive Lionshead Fire to the Camp Fire that destroyed Paradise, California, two years ago.

“If you remember the Paradise Fire in 2018, it’s the same topography: three canyons coming down like a funnel into the city of Paradise at the bottom of the funnel,” Trett explained. “When I heard that two years ago I said, that’s Detroit.”

The 94 major blazes have mainly burned rural zones and forest land, but major urban centers like Los Angeles, San Francisco, Seattle, and Portland have seen their air quality plummet and the sun blotted out due to the toxic smoke being pumped out of the fires, increasing the risk of lung infections and infectious diseases.

Emergency workers are also fighting to recover bodies from the fire, and in some cases have located the corpses of victims but have been unable to recover them due to harsh conditions.

Dozens remain missing in the western Oregon counties of Jackson, Lane, and Marion, according to Gov. Kate Brown.

For the first time in Oregon’s history, the state has now activated a 75-person regional response team to recover bodily remains and operate a mobile morgue. The state has long trained for such an event but up to now, hasn’t been forced to use it. Certified death investigators, law enforcement personnel, criminalists and forensic scientist will be aiding the team’s efforts, reports the Oregonian.

While Oregon’s fires usually consume 500,000 acres annually in the state, “this week alone, we burned over a million acres of beautiful Oregon,” Gov. Brown said.

“We saw the perfect fire storm,” she added. “We saw incredible winds. We saw very cold, hot temperatures and, of course, we have a landscape that has seen 30 years of drought.”

“These are climate fires,” Ingalsbee said. “And they’re the product of extreme heat waves and prolonged droughts and then very low humidities.”

“Though some scientists hesitate to attribute a single event to climate change, these are exactly the conditions predicted by climatologists,” he added. “And where once they were rare — I mean, they’re not entirely unprecedented in our prehistoric past — they will become much more frequent in the days ahead.” 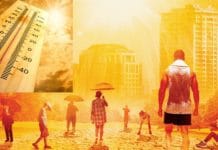 Super ‘Heat Dome’ to Fry U.S. With Record Temperatures from 90F to 121F for Several Weeks