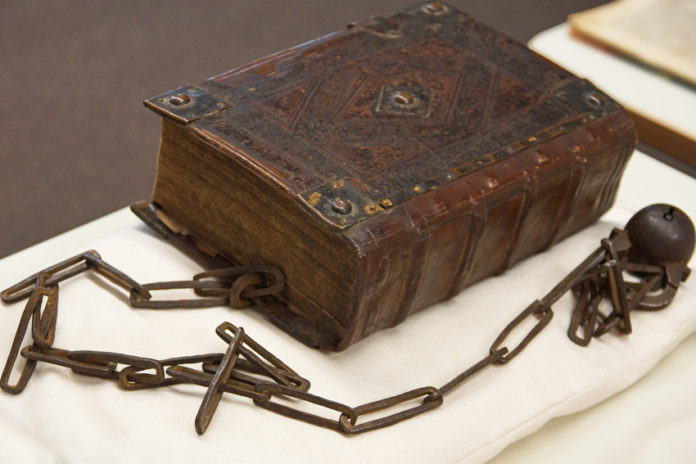 Hundreds of “indispensable books…. Full of truths that Americans should really know” have been “undone” by various means, according to NY University media studies professor Mark Crispin Miller who appeared as a guest on Abby Martin’s “Breaking The Set” on RT. Although five books are currently in the series, only three were discussed in the interview.

Although the first amendment prohibits the government from outright banning books, it has found ways of circumventing this restriction. The threat of legal litigation, reviewers who “freeze out” certain titles or write-off factual accounts as “conspiracy theory” are just some of the means that the federal government can keep books away from the public eye. The three books that had been discussed in the interview are just a few examples that Miller had mentioned and are part of a new series by Miller called “Forbidden Bookshelf” that aims to have works that are out of print “republished”. Available on Amazon, these are books that have mostly been “done in by powerful interests, by the CIA, by corporate”  powers so that they remain unknown to the majority of Americans.

The first book is written by Douglas Valentine first published in the early nineties. A crucial study of an enormous CIA covert program that had taken place in South Vietnam, the book details a terror program that had aimed to combine the forces of the police, military and intelligence to pacify the South Vietnamese population while supporting the American-backed regime. All in the name of fighting terror (Now where have we heard THAT one before?).

Miller goes on to say, “The government uses the danger of terrorism to justify all kind of horrible infringements on our constitutional rights, so that it’s now okay to assassinate Americans with drones, it now okay to subject Americans to indefinite detention by the military. All of this was first put in place by the CIA in the Phoenix program, which accounts for the deaths of tens of thousands of civilians in South Vietnam who had been tortured and assassinated”. If there was any belief that the government’s intention had ever been noble in Vietnam, this book should be laid to rest….. Together with the phony belief that our freedoms have to be protected by sacrificing them. It has all been done before, and this is why nobody remembers it.

The phoenix program could even be regarded as a template for the current War on Terror, according to the book’s author in a new author’s note, “Take heed reader: Phoenix has come to define modern American warfare as well as its internal “homeland security” apparatus. Indeed, it is the phoenix program that we find the genesis of the para-militarization of American police forces, in their role as adjuncts to the military and political security forces engaged in population control and suppression of dissent.” So THAT’s why they go around shooting and killing kids with toy guns, the disabled and homeless people. Gotta keep that population suppressed.

Valentine’s book was originally given the go-ahead by the head of the CIA at the time, William Colby (who was also the most prominent defender of the program at the time before congress), and Valentine was allowed to interview CIA officers who had been involved with the program. The CIA later decided that this information would prove too damaging to the reputation of the agency, and they immediately rescinded access to his sources, and he had to fight them in court. When the book had actually been published, a CBS reviewer had come out condemning the book in a New York Times piece. This meant that Douglas Valentine’s career as a writer would be informally black-listed, his work unpublished.

The Lords of Creation

Written by Federick Lewis Allen in 1935, this book had predicted the capitalist expansion in the last 100 years. The rise of the Robber Barons and the consolidation of wealth into the hands of a few such as the Rothschild family are just some of the predictions he had made. It details the early history of the financiers like JP Morgan, and how they had profited from every boom and bust they had engineered for the country.

Christopher Simpson is well-known for writing about Operation Paperclip, and in Blowback he writes about the attempts of US agencies to recruit Nazis in the Cold War. Notably, he includes a new critique of the difficulties he had encountered in the government’s procedures in the declassification of documents. An attorney who was notorious for attempting to justify Bush’s torture program had nearly been placed in charge of the National Archives at the time. Ironically, this critique had originally been meant to be published by the National Archives in their report, but it was censored and so found its way to Blowback. Yup, America also works with fascists.
From the War on Terror to the so-called GFC recovery that has only been a wealth redistribution from the middle to the rich, and even to government hypocrisy in working with heinous mass murderers in order to maintain hegemony, these books explain the history that has led to our most pressing current affairs.

A man who does not learn from the past is doomed to repeat it, and we see clearly why these books have been swept under a rug, their authors maligned.