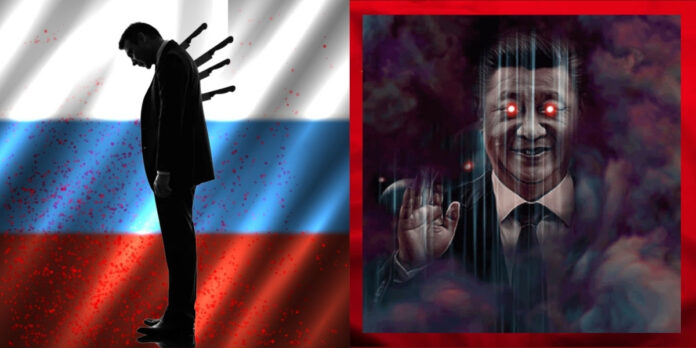 China is quietly distancing itself from Russia’s sanction-hit economy.

The two states proclaimed last month that their friendship had “no limits.” That was before Russia launched its war in Ukraine.

Now, with Russia’s economy being slammed with sanctions from all over the world, there is growing evidence that China’s willingness and ability to aid its northern neighbor may be limited. Beijing has refused to condemn Russia’s attack on Ukraine but wants to avoid being impacted by the sanctions it has repeatedly denounced as an ineffective way of resolving the crisis.

“China is not a party to the [Ukraine] crisis, and doesn’t want the sanctions to affect China,” Foreign Minister Wang Yi said Tuesday during a phone call with his Spanish counterpart.

Beijing also gave its full backing Wednesday to comments made earlier this week by China’s ambassador to Ukraine. “China will never attack Ukraine. We will help, especially economically,” Fan Xianrong was quoted as saying in a press release from the Lviv regional government.

Fears that Chinese companies could face US sanctions over ties with Russia had contributed to an epic sell-off in Chinese stocks recent days. That slump was reversed Wednesday when Beijing promised it would pursue policies to boost its sputtering economy and keep financial markets stable.

US officials told CNN on Monday that they have information suggesting China has expressed some openness to providing Russia with requested military and financial assistance. China dismissed that as “disinformation.”

Analysts say that China is attempting to strike “a delicate balance” between supporting Russia rhetorically but without further antagonizing the United States.

Beijing and Moscow share a strategic interest in challenging the West. However, Chinese banks cannot afford to lose access to US dollars, and many Chinese industries cannot afford to be deprived of US technology.

While China is Russia’s No. 1 trading partner, Beijing has other priorities. Trade between the two countries made up just 2% of China’s total trade volume. The European Union and the United States have much larger shares, according to Chinese customs statistics from last year.

Here are some measures Beijing has taken in the last few weeks to distance itself from the isolated and crumbling Russian economy.

China’s currency, the yuan, doesn’t trade completely freely, moving instead within bands set by officials at the People’s Bank of China (PBOC). Last week, they doubled the size of the ruble trading range, allowing the Russian currency to fall faster.

The ruble has already lost more than 20% of its value against both the dollar and euro since the start of the war in Ukraine. By allowing the Russian currency to fall against the yuan, Beijing isn’t doing Moscow any favors.

Russians will have to pay more in rubles for Chinese imports such as smartphones and cars. Chinese phone brands like Xiaomi and Huawei are hugely popular in Russia, and were vying with Apple (AAPL) and Samsung (SSNLF) for market leadership before the war.

Expanding the trading band would allow the yuan to keep up with the ruble’s wild swings, so that Chinese companies can “better grasp the magnitude or trend of future exchange rate fluctuations and reduce exchange risks by using hedging methods, such as derivatives,” state-owned China Business Network reported last week.

The most significant help China could offer Russia is through the $90 billion worth of reserves Moscow holds in yuan, wrote Alicia García-Herrero, chief economist for Asia Pacific at Natixis, in a research report on Tuesday.

Sanctions have frozen about $315 billion worth of Russia’s reserves — or roughly half the total — as Western countries have banned dealing with the Russian central bank.

Russia’s finance minister Anton Siluanov said this week that the country wanted to use yuan reserves after Moscow was blocked from accessing US dollars and euros, according to Russia’s state media.

The PBOC has so far not made any comment about its position regarding these reserves.

If China allowed Moscow to convert its yuan reserves into US dollars or euros, “that would clearly help Russia’s current impasse,” García-Herrero noted. However, “the reputational risk of potentially breaching Western sanctions would be a huge step for the PBOC to take and therefore makes it highly unlikely,” she said.

“The long-term gains of moving closer to Russia might not match the impact of Western investors suddenly losing interest in China,” she added.

Sanctions imposed by the United States and the European Union mean that the world’s two major aircraft makers, Boeing (BA) and Airbus (EADSF), are no longer able to supply spare parts or provide maintenance support for Russian airlines. The same is true of jet engine makers.

That means Russian airlines could run out of parts within a matter of weeks, or fly planes without having equipment replaced as frequently as recommended to operate safely.

Earlier this month, a top Russian official said that China has refused to send aircraft parts to Russia as Moscow looks for alternative supplies.

Valery Kudinov, head of aircraft airworthiness at Russia’s air transport agency, was quoted by Russian state news agency Tass as saying that Russia would look for opportunities to source parts from countries including Turkey and India after a failed attempt to obtain them from China.

“As far as I know … China refused,” Kudinov was quoted as saying.

In response to CNN’s request for comment, China’s foreign ministry reiterated Beijing’sopposition to sanctions adding that China and Russia will maintain “normal economic and trade cooperation.”

China and Russia set up a civil aviation joint venture in 2017 to build a new long-haul, widebody passenger plane, seeking to rival the duopoly of Boeing and Airbus. Production of the CR929 has begun, but disagreements over suppliers have caused delays. The plane was initially expected to be offered to customers in 2024. But Russia postponed the timeline to 2028 to 2029.

The World Bank has halted all its programs in Russia and Belarus following the invasion of Ukraine. It hadn’t approved any new loans or investments to Russia since 2014, and none to Belarus since 2020.

More surprisingly, perhaps, is the decision by the Beijing-based Asian Infrastructure Investment Bank to do the same. In a statement earlier this month, it said it was suspending all its activities related to Russia and Belarus “as the war in Ukraine unfolds.” The move was “in the best interests” of the bank, it added.

Frustrated by a relative lack of influence at the World Bank (based in Washington, D.C.) and the Asian Development Bank (where Japan is a major force), China launched the AIIB in 2016. In addition to hosting the headquarters, China provides the president of the bank and has 26.5% of the votes. India and Russia have 7.6% and 6% respectively.

The AIIB’s decision to suspend activities in Russia means $1.1 billion of approved or proposed lending aimed at improving the country’s road and rail networks is now on hold.