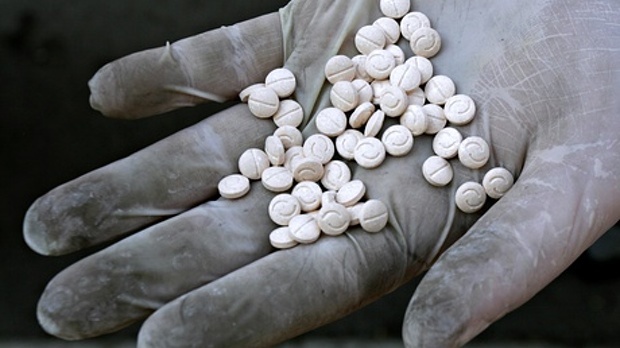 United Kingdom — Dubbed the “jihadist’s drug,” Captagon is rapidly flooding the Middle East and is said to be fueling the bloody conflict in Syria. French media recently reported that the Paris attackers may have taken the drug.

Last weekend, Turkish anti-narcotics police seized 11 million Captagon pills in a haul that weighed almost two tonnes. It was set to ship to Gulf countries. Widely banned since the mid-eighties, the pills provide a cheap and long-lasting high and are highly addictive. They also have the potential to cause psychosis and brain damage.

The production of the drug, which keeps fighters awake over long periods of time, is said to be providing income for all factions involved in the Syrian war.

During the last year, shipments of Captagon have been seized on the way to the West Bank, Jordan, Sudan, Syria and the Gulf. In October, Anti-Media reported on a Saudi prince who was arrested for trying to smuggle two tons of the drug onto a plane.

As Syria has been engulfed in war, smugglers of the little-known, highly addictive pills have been forced to find alternate routes through Lebanon.

Lebanese journalist Radwan Mortada has spent 10 years investigating crime, corruption, and the war in Syria. In her documentary for Journeyman Pictures, The Drug Fueling Conflict in Syria, Mortada follows the Captagon trail, from users on the battlefields to traffickers on Lebanese smuggling routes to the kingpins at the top of the supply chain.

“There was no fear anymore”

Since the Syrian war began, police in the region have continued to seize record-breaking numbers of the pills. Lebanon’s biggest haul to date was a whopping 50 million tablets with a street value of $300 million, weighing over 4 tonnes, en route to Dubai.

In Mortada’s documentary, men in Beirut are shown crushing the pills and chopping them into lines. They describe the effects as “better than cocaine” and “really strong and like morphine — for really strong pains.” Their experience points to why Captagon has become the drug of choice for some Syrian fighters.

“There was no fear anymore after I took Captagon,” one ex-fighter said.

“It stops you feeling anything, you know? It makes you numb, numb,” said another, who described the first time he took the drug as making him feel physically fit.

“If there were 10 people in front of you, you could catch them and kill them. You’re awake all the time,” he said.

Since 2013, Captagon smuggling in Lebanon has skyrocketed. The Syrian war has not only pushed smuggling through the country, but has allowed gangs to set up makeshift Captagon factories in the country itself.

Mortada’s documentary is the first time an illegal factory has ever been filmed. It shows the pills being packaged and disguised in packets of tissues. Factory workers reveal that they use vegetables, bread, and hair gel for smuggling in Lebanon’s home-grown Captagon trade.

Shia militant group Hezbollah—currently fighting in Syria for the Assad regime—has also been accused of being involved in the trade after two factories were discovered on its premises.

“Standing on their feet”

On the surface, Abu Zeus looks just like a wealthy businessman, but he has been funding Captagon factories for years. He fled Syria when the war began and now resides in Europe. It took Mortada months to persuade him to be interviewed.

Described as being at the top of the supply chain, Abu Zeus boasts on camera of a $6 million profit last year from trading the small pills. The Syrian brigades that have publicly named him as a benefactor number in the thousands, according to Mortada.

Opposed to both the regime and jihadist groups, Abu Zeus brags of keeping the secular groups in Syria “standing on their feet.’’ He boasts of ‘supporting’ around 12,000 armed men.

He claims the Saudis love the drug because of the country’s alcohol ban and admits that selling to them has made him a great deal of money. He’s adamant that his drug profits counter the money from Saudi Arabia that he believes is funding jihadist groups and destroying Syria:

“The truth is that the country that exports terrorism to the Middle East and the protector of terrorism is Saudi Arabia,” he said.

Going some way towards explaining why Captagon is tailor-made for the battlefield—and why some have come to rely on the drug after five years of fighting—another fighter described the drug’s effects. He was frank:

“You don’t have any problems. You don’t even thinking about sleeping or leaving the checkpoint. It gives you great courage and power,” he said.

This article (Captagon: The Jihadist’s Drug) is free and open source. You have permission to republish this article under a Creative Commons license with attribution to Michaela Whitton and theAntiMedia.org. Anti-Media Radio airs weeknights at 11pm Eastern/8pm Pacific. If you spot a typo, email [email protected].