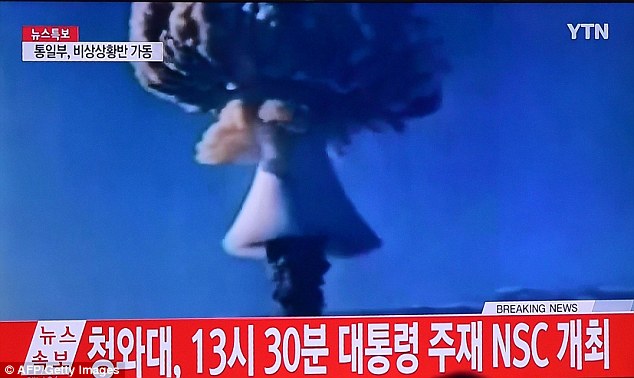 A 5.1 magnitude earthquake felt in the Korean peninsula has just been confirmed to have been caused by the explosion of a particularly devastating nuclear weapon: the hydrogen bomb (according to North Korea anyway).

The earthquake was felt miles away from the North Korean test site. South Korea and Japan have long speculated that North Korea was developing the weapon, and this explosion should confirm their worst fears.

A Hydrogen bomb is far more powerful than a conventional nuclear fission bomb, despite being smaller and lighter. This inforgraphic by Popular Mechanics might give you some idea of just how much more powerful H bombs are.

The Tzar Bomba is the largest H bomb ever tested. That isn’t an ant in the background of the pic by the way; it’s the Hiroshima bomb.

Mike, or Ivy Mike, was the very first Hydrogen bomb ever tested– it vaporized the island it was tested on, leaving a hole 2 km wide in the ocean floor. The hole was deep enough to fit a 17 story building into.

A Hydrogen bomb isn’t completely fusion-based though; instead the fusion chain reaction is triggered by the explosion of a small nuclear bomb in the core of the weapon.

‘The republic’s first hydrogen bomb test has been successfully performed at 10am on January 6, 2016, based on the strategic determination of the Workers’ Party,’ said the state television news reader a few hours after the blast.

In a signed letter broadcast over  North Korean media, Kim wrote that he wanted to ring in the new year with a literal bang.

“For the victorious and glorious year of 2016 when the 7th convention of the Workers’ Party will be held, make the world look up to our strong nuclear country and labor party by opening the year with exciting noise of the first hydrogen bomb!” the letter read.

The test has sent the leaders of Japan and South Korea scrambling; South Korean president Park Geun-Hye, and her counterpart in Japan both convened their own emergency meetings as soon as North Korea announced the test.

‘We will take all necessary measures including additional sanctions by the U.N Security Council so that the North will pay the price for the nuclear test,’ said the South Korean leadership in a statement.

Abe said to reporters that, ‘we absolutely cannot allow this, and condemn it strongly.’

The Chinese and the South Koreans had previously (correctly) guessed that the earthquake was man-made.

North Korea is one of only eight countries which have admitted to possession of a nuclear weapon. Even fewer nations posses the far more devastating fusion bomb.

Some believe that North Korea does not yet posses a H bomb, but instead only had access to “boosted” nuclear bombs.

Even so, these nuclear bombs are exceedingly deadly: senior defense analyst at the Rand Corp Bruce Bennett wrote last month that “if North Korea really has a boosted nuclear weapon of perhaps 50 kilotons, it could do significant damage in a city as densely populated as Seoul, South Korea: About 250,000 people could be killed in such a strike, or about 2.5% of the population,”

“And if North Korea one day produces a true hydrogen bomb of, say, one megaton yield, then it would be deadlier still.“

This Article (North Korea Tests Hydrogen Bomb, Causing 5.1 Magnitude Earthquake) is free and open source. You have permission to republish this article under a Creative Commons license with attribution to the author(CoNN) and AnonHQ.com.