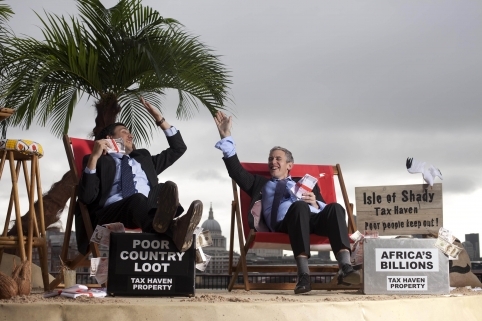 America has been bugging the world about dodgy tax havens- ostentatiously to stop the super rich and the corporations from getting away without paying their fair share of taxes. It even slapped a 1.3 Billion dollar fine on Swiss banks suspected of helping Americans hide income offshore. All this sounds great for the average citizen… until of course you realize that, as with every “nice” thing a government does, an ulterior motive exists: you have to kill off the competition, if you want to take their place.

Bloomberg reported that Andrew Penney, managing director of a firm called Rothschild and Co., gave a speech in September last year. He explained how the elite around the world can avoid paying taxes- by moving their money to the U.S. of A.

“The U.S. “is effectively the biggest tax haven in the world” —Andrew Penney, Rothschild And Co. wrote in a draft of his San Francisco presentation, which was later revised. He also noted that the US also lacks “the resources to enforce foreign tax laws and has little appetite to do so.”

Some have even taken to calling the U.S. the new Switzerland; the U.S. has become the leading tax and secrecy haven for the foreign elite by refusing to adhere to global disclosure standards issued by the Organisation for Economic Co-operation and Development. These standardswere modeled on the US’s own  Foreign Account Tax Compliance Act (or more whimsically, Fatca), which  forced institutions to disclose foreign accounts owned by U.S. citizens to the IRS.

Only four nations declined to sign the OECD’s disclosure requirements: Bahrain, Nauru, Vanuatu and the United States of America.

“How ironic—no, how perverse—that the USA, which has been so sanctimonious in its condemnation of Swiss banks, has become the banking secrecy jurisdiction du jour,” wrote a lawyer at Anaford AG, Peter A. Cotorceanu,  in a legal journal. “That ‘giant sucking sound’ you hear? It is the sound of money rushing to the USA.”

America is the only industrialized nation in the world which taxes its citizens who live and work overseas, even if the income was generated in a foreign nation. This can lead to double taxation, and is probably a major type of tax evasion , the US government wishes to track down when it forces foreign institutions to tell on their American clients. Unfortunately, what applies to American citizens living overseas quite certainly does not apply to rich foreigners.

Rothschild And Co. is a centuries-old European export, and it has opened a trust company in Reno, Nevada,  blocks away from Harrah’s and Eldorado casinos. It is moving the vast fortunes of its clients out of notorious havens like Bermuda, which are subject to the new international disclosure requirements, and into the literally-Rothschild-run trusts in Nevada that are exempt from scrutiny.

A Rothschild spokeswoman claimed that its clients were attracted by the stability of the U.S., and that its trusts had “not been set up with a view to exploiting that the U.S. has not signed up” for international reporting standards.

Sven Giegold, a member of the European Parliament from Germany’s Green Party, had this to say about the US’s double standards: “I have a lot of respect for the Obama administration because without their first moves we would not have gotten these reporting standards. On the other hand, now it’s time for the U.S. to deliver what Europeans are willing to deliver to the U.S.”

The Treasury Department was unconcerned with the alleged double standards, with a Treasury spokesman claiming that “the U.S. has led the charge in combating international tax evasion using offshore financial accounts”, and that the OECD had modeled its own policy on Fatca. It turns out that while the U.S. was able to force the world the adhere to Fatca, nobody can force the U.S. to adhere to a version of its own stringent regulations.

The shift in the financial balance of power has been profitable to U.S. based financial institutions.  Bolton Global Capital, a Boston-area financial advisory firm; its CEO Ray Grenier said in an email that the nation’s failure to sign onto the OECD regulations.  “Proving to be a strong driver of growth for our business,” with a sharp increase in the money flowing in from Europe, “Switzerland in particular, ” Grenier said. “[This]was the beginning of the exodus.”

This Article (“Effectively The BIGGEST Tax Haven In The World”- Rothschild Co. Director… You’ll Never Guess Where) is a free and open source. You have permission to republish this article under a Creative Commons license with attribution to the author(CoNN) and AnonHQ.com.