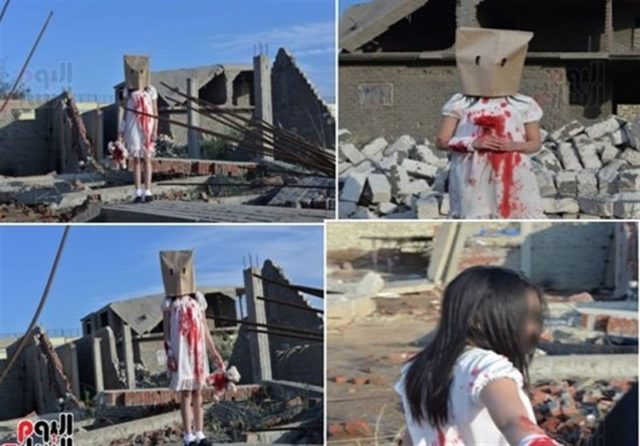 (ANTIMEDIA) If you have been following the crisis in the Syrian city of Aleppo closely, you have undoubtedly seen claims that the mainstream media is propagating a great deal of misinformation. Mainstream media outlets have even started to acknowledge this horrifying fact.

However, if one ever needed a reason to be skeptical of claims, photographs, and/or videos coming out of the region, Egyptian authorities have just provided it.

Five people in Port Said, Egypt, have been arrested for allegedly making fake videos that purport to show the wreckage of air strikes in Aleppo, according to the Egyptian Interior Ministry.

The statement said the videographer, his assistants, and the parents of two children who appear in the footage were detained after a trail led police to them at a building site awaiting demolition. The five have reportedly admitted they were planning to distribute their footage on social media, which was supposed to show an eight-year-old girl in a white dress and bandages, covered in red stains while holding a teddy bear.

“A 12-year-old boy is also interviewed about what life is like under intensive Russian-backed Syrian government air strikes,” reported The Independent.

Of course, this does not mean all footage coming out of the region is fake. It also does not mean every claim made by Russian, Syrian, and Iranian officials about the conflict is true in comparison.

Still, the fact remains that journalists aren’t going to rebel-held areas for fear of execution. Instead, they rely on the Syrian Observatory for Human Rights, which is run by one anti-Assad dissident in Coventry, England. So-called Syrian activists and the shady group known as the White Helmets make up the rest of the reports in Syria, even though they both have also been largely criticized and discredited.

The fact the mass media disproportionately focuses on Aleppo while turning a blind eye to the horrendous crimes being committed in Yemen courtesy of the United States, the United Kingdom, and an inexperienced Saudi-led coalition indicates the media’s concerns for human rights in Syria are disingenuous.

This article (5 Arrested While Creating Fake Anti-Russian Propaganda Video About Aleppo) is free and open source. You have permission to republish this article under a Creative Commons license with attribution to Darius Shahtahmasebi andtheAntiMedia.org. Anti-Media Radio airs weeknights at 11 pm Eastern/8 pm Pacific. Image credit: The Independent. If you spot a typo, please email the error and name of the article to [email protected].