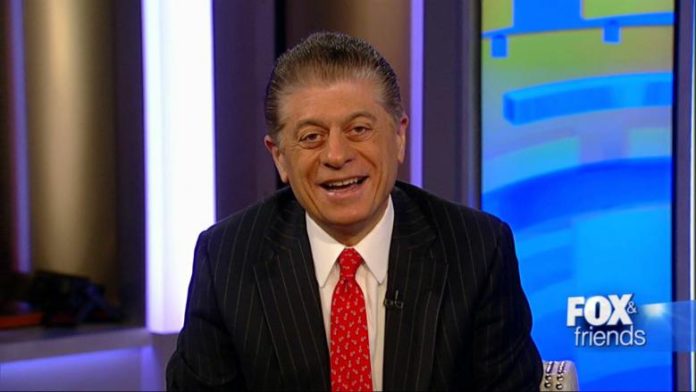 Judge Napolitano finally had had enough, and spoke the truth by asking a series of questions. He never made any specific allegations, and simply asked thought-provoking questions, in order to skirt around what was likely limitations  imposed by FOX “News”on what he could say. Nonetheless, he was soon kicked out, his show canned. He risked his livelihood to tell you the truth, and unless we pay attention, whistle-blowers will become extinct.

Transcript of his speech:

“What if Democrats and Republicans were two wings of the same bird of prey? What if elections were actually useful tools of social control? What if they just provided the populace with meaningless participation in a process that validates an establishment that never meaningfully changes? What if that establishment doesn’t want and doesn’t have the consent of the governed? What if the two-party system were actually a mechanism used to limit so-called public opinion?

What if there were more than two sides to every issue, but the two parties wanted to box you in to one of their corners?

What if those vaunted differences between Democrat and Republican were actually just minor disagreements? What if both parties just want power and are willing to have young people fight meaningless wars to enhance that power? What if both parties continue to fight the war on drugs just to give bureaucrats and cops bigger budgets and more jobs? What if government policies didn’t change when government’s leaders did? What if no matter who won an election, government stayed the same? What if government were really a revolving door of political hacks, bent on exploiting the people while they’re in charge?

What if both parties supported welfare, war, debt, bailouts and big government? What if the rhetoric candidates displayed on the campaign trail was dumped after electoral victory? What if Barack Obama campaigned as an antiwar, pro-civil liberties candidate, then waged senseless wars while assaulting your rights that the Constitution is supposed to protect? What if George W. Bush campaigned on a platform of nonintervention and small government, then waged a foreign policy of muscular military intervention and a domestic policy of vast government borrowing and growth?

What if Ronald Reagan spent six years running for president promising to shrink government, but then the government grew while he was in office? What if, notwithstanding Reagan’s ideas and cheerfulness and libertarian rhetoric, there really was no Reagan Revolution?

What if all this is happening again? What if Rick Santorum is being embraced by voters who want small government even though he voted for the Patriot Act, for an expansion of Medicare and for raising the debt ceiling by trillions of dollars? What if Mitt Romney is being embraced by voters who want anyone but Obama, but don’t realize that Romney might as well be Obama on everything from warfare to welfare?

What if Ron Paul is being ignored by the media not because they claim he’s unappealing or un-electable, but because he doesn’t fit into the pre-manufactured public-opinion mold used by the establishment to pigeonhole the electorate and create the so-called narrative that drives media coverage of elections?

What if the biggest difference between most candidates was not substance but style? What if those stylistic differences were packaged as substantive ones to reinforce the illusion of a difference between Democrats and Republicans? What if Romney wins and ends up continuing most of the same policies Obama promoted? What if Obama’s policies, too, are merely extensions of Bush’s?

Why was he fired though? Well, for one thing, his speech was NOT divisive. No, he did not simply blame the Democrats, perpetuating the false democrat-republican dynamic that often ignores the truth. No, he went straight for the jugular and told you what he KNEW FOR A FACT to be true; a former puppet who knows very well how his masters pulled his strings. Every question he asked speaks to the heart of the people, spoke to my heart, and I had to bold almost every sentence because every sentence of his speech was important.

He ended with two important questions, questions that should make you think long and hard if another Bush, or another Clinton would really make a difference. The brother of a Warmonger, or the wife who stuck to an unfaithful husband simply to claw her way into power. Or that rich tycoon with floppy hair, who will screw Americans over, but at least (so his faithful will say) because he wants to and not because he was ordered to.

What IF Americans dared to vote for a third party, or better yet, pulled an Iceland?