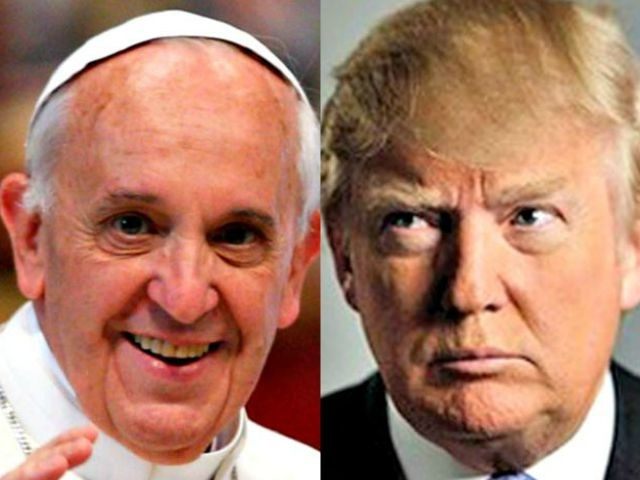 As though Trump’s campaign had gone on for too long without (major) controversy, having already picked the low-hanging fruit of denying entry to Muslims and building a great big wall, now it has the Pope in its sights. How better to stir the pot?

The Pope began the argument by stating that someone “who thinks only about building walls, wherever they may be, and not building bridges, is not Christian.” Of course, Trump is never one to let a remark go by without showing off his longest fingers. Even if said remark was general enough to have been referring to Israel’s plans to build some wall or another, or even the ancient Chinese (heard they were pretty Great at building Walls). To be fair, those guys weren’t ever Christians to begin with, but plausible deniability and all that.

He called the Pope’s words “disgraceful,” and added that “if and when the Vatican is attacked by ISIS, which as everyone knows is ISIS’s ultimate trophy, I can promise you that the Pope would have only wished and prayed that Donald Trump would have been President because this would not have happened.” Ouch, that was pretty spiteful. What happened to “turn the other cheek?”

One would think that ISIS’s ultimate trophy would be Trump, stealing their limelight by being…whatever he is…and all. Also, was he threatening the Vatican?

Trump later dialed back his fiery rhetoric,  admitting that the Pope’s words were “a little bit lighter…than the press portrayed after I read a transcript.” The Pope seems to have made it a habit to humble politicians every now and again.

In an MSNBC interview, Jeb Bush notes that “it was probably inappropriate for the pope to intervene at the — in the height of a contested primary in that way.”

“He is a spiritual leader, he’s an inspiration, he’s the head of my church, so I’m cautious about this to be honest with you,” Bush said, “but I don’t think he helped anybody by saying Donald Trump’s not a Christian.”

This article (Trump Targets the Pope for Implying that he isn’t Christian) is a free and open source. You have permission to republish this article under a Creative Commons license with attribution to the author(CoNN) and AnonHQ.com.