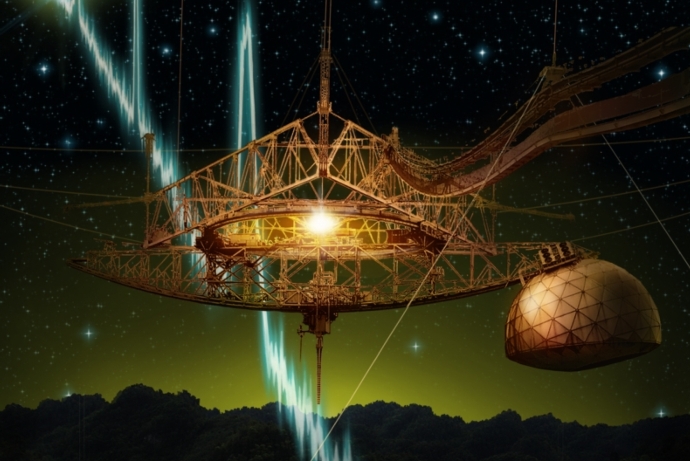 An international team of scientists have detected a repeat of a previously recorded Fast Radio Burst or FRB for the very first time- a discovery which could shake up our current understanding of their origins. Their study was published in Nature.

FRBs are short bursts of radio signals from beyond the Milky Way which last just a thousandth of a second- and release the equivalent amount of energy that our sun produces in 10,000 years! The first FRB was recorded in 2001, and since then 17 have been detected, all of them believed to be unique… until now, that is.

Astrophysicists had previously believed that FRBs were caused by an immensely destructive event which obliterates the source, and thus prevents a repeat performance. Colliding neutron stars, for example. The collapse of a star into a black hole, perhaps. The evaporation of a black hole, even. However, if this discovery is accurate it indicates that the source of an FRB doesn’t necessarily get destroyed.

The unusual burst was detected by the Arecibo Observatory in Puerto Rico. Over the course of 2 months, another 10 bursts were detected from the same place, sometimes within hours of one another. When the scientists checked their records, they found a burst from the same location in 2012!

The FRBs had different wavelengths and intensity peaks, despite coming from the same source. The bursts were also not periodic,  apparently ruling out most orbital phenomenon.

Shami Chatterjee, a senior researcher at Cornell, stated that the FRB detected was not caused by a cataclysmic event.

“In our paper, we’re showing that our FRB can’t have an explosive origin. So, either there’s an odd coincidence,” Chatterjee said, “or maybe there are different types of FRBs. Either way, it seems we’ve broken this enigmatic phenomenon wide open.”

“This research shows for the first time that there can be multiple FRBs from the same place in the sky – with the same pulse dispersion or distance. Whatever produces the FRB can’t be destroyed by the burst, because otherwise, what would produce the next pulse?”

“We’re showing that whatever battery drives FRBs, it can recharge in minutes,” he noted.

“The energy of the event becomes very problematic. We’re detecting these FRBs from very far away, which means that they are intrinsically very bright. Only a few astrophysical sources can produce bursts like this, and we think they are most likely neutron stars in other galaxies.”

While magnetars, neutron stars that have strong magnetic fields, could produce an FRB without destroying its source, they are not known to be able to produce more than one.

Before we reach for more…exotic… explanations, the scientists believe that an extremely powerful pulsar, a rapidly rotating neutron star that emits a beam of light and radio frequency (imagine a lighthouse of a cosmic scale), rotating around a black hole could provide an explanation for the phenomenon; sometimes the periodic bursts of radio frequency from the pulsar is masked by the black hole, causing the bursts to appear more sporadic.

“Nature is more clever than theorists, and I think most of us would hope there are new, exotic phenomena to be identified here, but we have to be careful to not let expectations trump reality,” study co-author James Cordes said. “I am a minimalist—if you can explain something by known phenomena, you should.”

This article (Mysterious Repeating Radio Signals From Outside Our Galaxy Stump Scientists ) is a free and open source. You have permission to republish this article under a Creative Commons license with attribution to the author(CoNN) and AnonHQ.com.