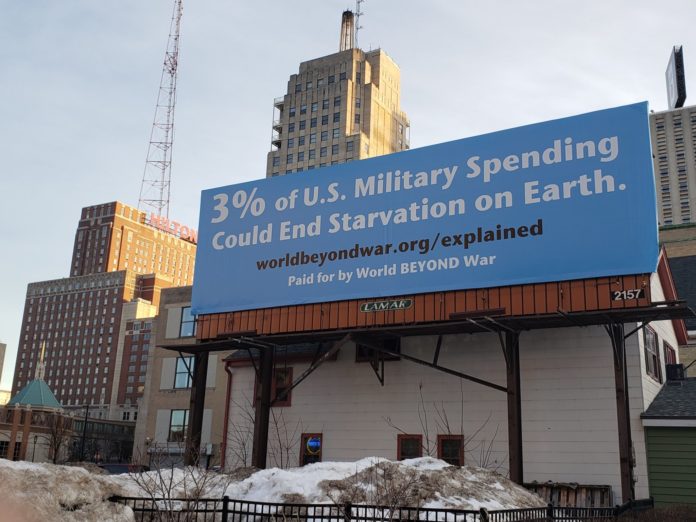 Sometimes the simplest things can have the most impact. In this case, it’s a billboard with a powerful message. Standing tall at the Southeast corner of Wells and James Lovell, across the street from the Milwaukee Public Museum for the month of February and again for the month of July, this billboard reads,

“3% Of U.S. Military Spending Could End Starvation On Earth.”

Sounds too good to be true, doesn’t it? Well, unfortunately it’s true and it really shows where the priorities of those in charge of America’s worldly affairs lie. A group of Milwaukeeans and other US citizens have chipped in to put up billboards such as this one in an effort to raise public awareness about this huge elephant in the room that no one seems to be talking about or addressing — the insane amount of funds allotted to the US military budget. These billboards are certainly giving people something to talk about.

In 2008 the United Nations announced that $30 billion per year could end hunger on the planet. As of 2019, the annual Pentagon base budget, plus war budget, plus nuclear weapons, plus the Department of Energy, plus the Department of Homeland Security and all other military-related spending totalled around $1.25 TRILLION. So if you are wondering where the 3% statistic came from, 3% of $1.25 trillion = $30 billion.

Organizations World BEYOND War, Milwaukee Veterans For Peace and Progressive Democrats of America have all contributed to the making this billboard possible.

“As veterans, we know that endless wars and the Pentagon’s corporate hand-outs do nothing to make us safe. We waste hundreds of billions of dollars that would be better spent on pressing needs like education, health care, and averting catastrophic climate change. Educating and reminding people of the true costs of war is a primary mission of Veterans For Peace. We are happy to be a partner in this effort by World BEYOND War.”–Paul Moriarity, President of Milwaukee Veterans For Peace

There are billboards and other big ads going up in many cities across the world, including Limerick, Ireland, Alaska, Lansing, Michigan, Schenectady, NY, and Pittsburgh, PA. In the past ads were placed in Toronto, Canada, Syracuse, NY, Baltimore,  ML, Charlottesville, VA and many other places. This incredible organization has also put out ads through Facebook advertising all in an effort to get the conversation started about the possibility of a world without war.

This statement is from the World BEYOND War website:

“World BEYOND War is a global nonviolent movement to end war and establish a just and sustainable peace.

We aim to create awareness of popular support for ending war and to further develop that support. We work to advance the idea of not just preventing any particular war, but abolishing the entire institution.

We strive to replace a culture of war with one of peace in which nonviolent means of conflict resolution take the place of bloodshed.

World BEYOND War was begun January 1, 2014. We have chapters and affiliates around the world.

While public opinion has moved against war, we intend to seize this moment to crystallize that opinion into a movement that spreads awareness that war can be ended, that its ending is hugely popular, that war should be ended as it endangers rather than protects — and harms rather than benefits — and that there are steps we can and must take to move toward war’s reduction and abolition.

War is not ending on its own. It is being confronted by popular resistance. But too often that resistance takes the form of denouncing one war as unacceptable (in contrast to theoretical good wars), or opposing a war because it leaves a military ill-prepared for other wars, or rejecting a weapon or a tactic as less proper than others, or opposing wasteful military spending in favor of greater efficiency (as if the entire enterprise were not an economic waste and a moral abomination). Our goal is to support steps away from war and to spread understanding of them as just that — steps in the direction of war’s elimination.”

Is A World Without War Truly Possible?

Of course! Anything is possible and the fact of the matter is that most of us would much rather see a world without war, but we do not believe that there is anything we can do to stop it. Given the fact that over 50% of Americans believe that 9/11 was an inside job it certainly makes one wonder, how is it that the US is able to justify the ongoing wars that essentially started because of this event? Fear plays a huge role in this.

The way I see it, war is an absolutely archaic practice, and it blows my mind every time I think about it. Is killing one another with bombs, drones and guns really the best solution to solve the world’s problems? Of course it’s not! But unfortunately psychopaths run our world and convince us using fear tactics that war is happening to protect us. As long as we believe and buy into these lies and fear one another, the more these heinous acts of senseless violence will continue.

As the saying goes, “fighting for peace is like [email protected]*king for virginity.”

Thankfully organizations such as World BEYOND War exist, to at least get the conversation started about war. Hopefully, enough fellow humans will eventually stand up for what’s really right, put down their weapons, cease fire, stop enlisting into the military, and stop supporting it. We have a lot more power than we realize.

If you’d like to support the World BEYOND War movement, or purchase a billboard please click HERE.

This article (A Billboard With A Powerful & Eye-Opening Message About Starvation) was originally created for Collective Evolution and is published here under Creative Commons.