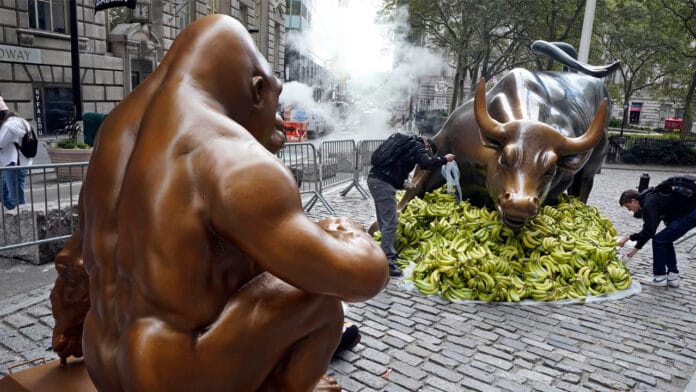 A 7-foot-tall bronze statue of a gorilla was installed facing off against Wall Street’s Charging Bull statue on Monday, drawing in-person crowds and spurring many retail investors (who often refer to themselves as “apes”) to take this as a sign that it’s the meme stocks’ time to shine.

The pop-up installation by Sapien.Network, a social networking platform under development that is “dedicated to putting the needs and welfare of human beings first,” also piled 10,000 bananas beneath the iconic bronze bovine to signify that Wall Street has gone “bananas.”

“The purpose of the protest is to highlight how out of touch Wall Street has become to the needs of everyday people and to challenge the Street’s uncompassionate capitalism,” it read. “As a symbol of the outrageous disparity in wealth between the 1% and everyone else, 10,000 bananas will surround Wall Street’s iconic Charging Bull to illustrate just how ‘bananas’ Wall Street has become.”

Pictures of the sapien statue staring down the bull quickly spread across social media on Monday into Tuesday, including Twitter and Reddit’s WallStreetBets community.

BREAKING: 7-Foot-Tall Harambe Ape Statue has been built in front of Wall Street's Charging Bull, which is now covered in bananas. pic.twitter.com/n3xBxGpofg

So what’s really up with the statue?

Sapien.Network founders Ankit Bhatia and Robert Giometti explained in a press release that this is a statue of Harambe, the Cincinnati Zoo gorilla controversially shot and killed by zookeepers in 2016 after a 4-year-old boy fell into the animal’s enclosure. The zoo defended the decision to kill the male silverback gorilla in order to protect the child, whose “life was in danger.” But the incident sparked public outrage. It even inspired Tesla TSLA, -0.18% founder Elon Musk to drop the heavily Autotuned rap single “RIP Harambe” in 2019.

“Though the gorilla never acted aggressively toward the child, Harambe was shot by zookeepers who were fearful for the child’s safety,” the Sapien.Network release said. “For Bhatia and Giometti, the bronze statue of Harambe, contrasted with the bronze Charging Bull of Wall Street, represents the millions of everyday people who struggle under a system that enriches wealthy elites and leaves the average person behind.” 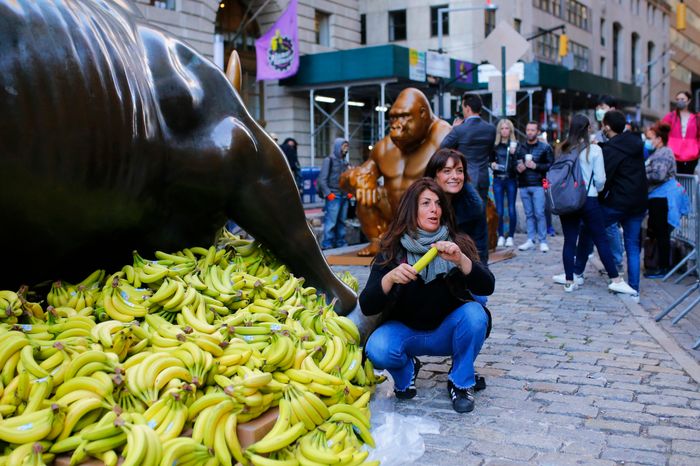 The Harambe statue installed across from the Charging Bull on Wall Street drew plenty of onlookers on Monday.

Sapien Network was not immediately available for comment. Giometti told NBC News 4 that “it’s not about rejecting capitalism or the current system. It’s about revolving them into the current future and letting them empower more groups of people. That’s the whole point of this story.”

He continued: “Harambe is a representation of something that lets us look at more than just ourselves. What are we aspiring to as people? It’s about connecting. A simple gesture of giving a banana builds community. As a society, we need to come together. We can’t keep fighting to come together.”

As for the 10,000 bananas, those are supposed to be donated to local food banks.

Of course, this isn’t the first time another art installation has dared to grab the Charging Bull by the horns, so to speak. The bronze “Fearless Girl” statue, showing a defiant, four-foot-tall bronze girl in a power pose with her fists on her hips squaring off against the bull, went viral in 2017. She was installed by U.S. financial firm State Street Global Advisors ahead of International Women’s Day to call out corporate America’s gender gap, and to symbolize women’s empowerment — much to the Charging Bull creator’s chagrin.

Wall Street Bull artist Arturo Di Modica told MarketWatch in 2017 that “Fearless Girl” was nothing more than an “advertising trick.” He passed away in February.

Fearless Girl was later moved to her permanent home in front of the New York Stock Exchange.