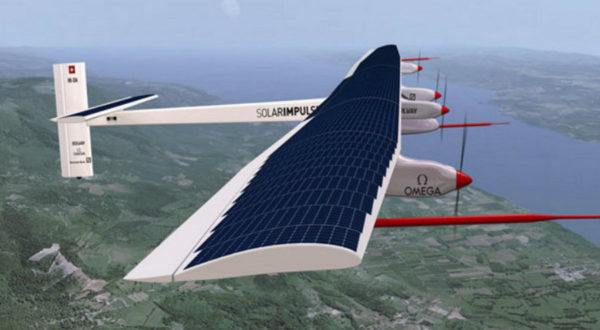 At long last, the experimental solar-powered aircraft, the Solar Impulse 2, which took to the sky in March 2015 from the Emirati city of Abu Dhabi, hoping to circumnavigate the earth, has successfully completed the mission.

On Tuesday, July 26, 2016, the Solar Impulse 2 made it’s final journey, landing in Abu Dhabi after traveling for 48 hours and 37 minutes from the Egyptian capital, Cairo in the final stage of the most ambitious journey ever recorded in aviation history. During daylight, the solar panels charged the plane’s batteries. The batteries make up a quarter of the plane’s 2.3 tonne weight. The pilot climbed to 29,000 feet during the day, gliding down to 5,000 feet at night to conserve power. The plane traveled at an average speed of about 30mph. The Solar Impulse is a private project financed by Swiss engineer and businessman André Borschberg, and Swiss psychiatrist and aeronaut Bertrand Piccard. At the start of the project, the two men aimed to be the first to circumnavigate the earth with a fixed-wing aircraft, using only solar power.

In total, the aircraft made the historic journey in 17 stages, flying more than 26,700 miles in 23 days, if it were to be flying nonstop. The two Swiss financiers of the project, Piccard and Borschberg, took turns flying the single-seat aircraft.

In July 2015, the plane completed its longest journey, flying from the Japanese port city of Nagoya to the city of Kapolei, in Hawaii, United States. The plane traveled 7,212 km in five days nonstop, from Japan to Hawaii. That journey set a mark for the longest solo flight in the history of any airplane.

After landing in Hawaii, the aircraft’s batteries experienced thermal damage, and engineers had to work on it to continue the mission. For almost nine months, engineers worked around-the-clock to restore the capacity of the batteries. About 13 repairs were carried out on other parts of the plane in Hawaii, to get it back into working order. According to engineers of the plane, this was the major hardware problem the Solar Impulse 2 suffered during the mission to complete the historic journey.

Piccard said the success story of the Solar Impulse 2 is a victory for those who believe that the future of energy in the aviation industry should be clean. He also said the solar technology that powered the plane can also be used on the ground to benefit people.

Captain Piccard was quoted as saying: “This is not only a first in the history of aviation; it’s before all a first in the history of energy. I’m sure that within 10 years we’ll see electric airplanes transporting 50 passengers on short to medium haul flights. These technologies now can make the world much better and we have to use them, not only for the environment, but also because they are profitable and create jobs.” Borschberg said the challenges they faced during the mission turned out to be opportunities for improvement, adding that they have been convinced that what they theorized on paper is workable on the ground.

Borschberg and Piccard began their Solar Impulse project way back in 2003. They first conducted a feasibility study at the École Polytechnique Fédérale de Lausanne in Switzerland.

Around 2004 to 2005, they started the development of their concept. By 2009, they had assembled a multi-disciplinary team of 50 engineers and technical specialists from six countries, assisted by about 100 outside advisers and 80 technological partners. The first prototype of the plane, named Solar Impulse 1, was built in that same year. It started a series of flying tests.

In 2013, engineers completed a second prototype, the Solar Impulse 2, which has now been able to successfully circumnavigate around the world. The project is said to have cost about €150 million. In late 2015, people donated €20 million to help the project. Some world leaders also backed the project at the World Economic Forum in Davos.

According to clean energy advocates, now that the mission of the Solar Impulse 2 has become successful, it has proved that renewable energy is possible in the aviation industry, and other sectors. As a result, we are now one step closer to achieving a clean energy future.

This Article (Aircraft Brings Hope for Clean Energy in the Future by Completing Historic Trip Around the World with only Solar Energy) is free and open source. You have permission to republish this article under a Creative Commons license with attribution to the author and AnonHQ.com