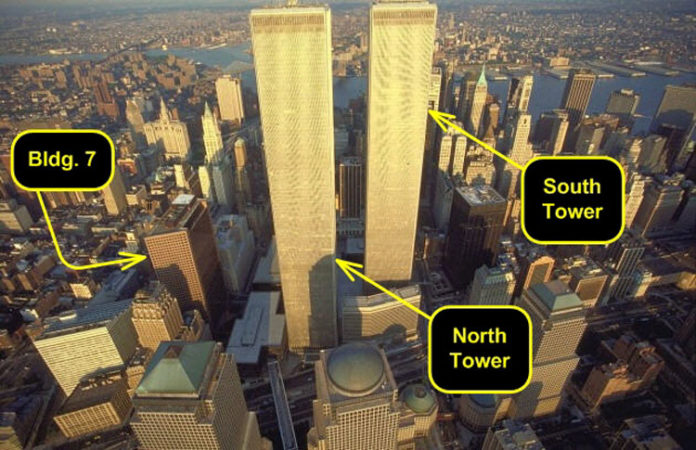 This week, activist and talk radio host Bob Tuskin went to the University of Florida campus armed with a small television and a microphone. After getting his gear set up, Tuskin started something that he called “The Building 7 Challenge.” The idea was to show people footage of building 7 falling at free fall speed on 9/11 2001, and just ask them what they saw on the video without first telling them when the footage was taken.

A vast majority of the people who he interviewed, even police officers that were called the scene, stated that it was fairly obvious that the building was demolished. After they gave their answers, Tuskin informed them that the footage was in fact from World Trade Center Building 7, the building that collapsed, but was not hit by a plane.

Despite the fact that building 7 appeared to be demolished and was not on fire as the other buildings were, there are many people who are not even aware that it fell on that day, and many others who think that it is simply a conspiracy theory.

There is so much evidence that has come to light since the collapse of the world trade centers that it is now quite clear that there was a massive cover-up involved in this situation. There were also many members of the establishment, employees of the CIA, FBI, NSA and other organizations who caught on to the cover up while it was happening. These whistleblowers successfully exposed the cover up beyond a reasonable doubt, but their stories were largely ignored by the mainstream media. The testimony of people like Sibel Edmonds, Richard Andrew Grove, William Bergman, Coleen Rowley, J. Michael Springmann, Robert Wright, Indira Singh and Barry Jennings totally blows the official government account out of the water.

Among the piles of scientific and anecdotal evidence, there are now over 1300 architects and engineers who have signed a petition demanding of Congress a truly independent investigation. This independent investigation is necessary because the 9/11 commission was a total puppet committee, who just pushed the story that the pentagon ordered them to.

The wars that are happening around the world, the police state that is expanding in the western world and general lack of privacy and peace worldwide is justified by the official story of the world trade center attacks on 9/11. Almost every specific point of the general story contradicts all evidence and eye witness accounts. The 9/11 commission, which was developed to investigate the issue was a setup. How do we know this? Most of the people who sat on the 9/11 commission have since come forward admitting that they were not allowed to look into most of the evidence and that they were tightly controlled by the pentagon. One commissioner John Farmer has even come out and wrote a book called “The Ground Truth” in which he reveals the details of how the 9/11 commission report was basically written by the government. This means that a kangaroo court was responsible for investigating the crime of the century, isn’t this a good enough reason to support a legitimate investigation?

Tuskin’s Building 7 Challenge can be viewed below, but you can put your friends, family and neighbors to the challenge as well!