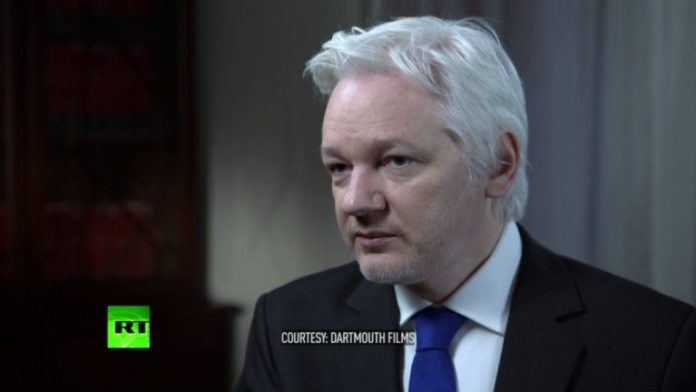 In an exclusive interview with John Pilger, Julian Assange of WikiLeaks argues that Hillary is the “central cog” of the establishment and is funded by the same countries backing the Islamic State.

Last week, Julian Assange, Editor-In-Chief of WikiLeaks, sat down with John Pilger, Australian journalist and filmmaker, for what is arguably Assange’s most provocative interview ever. During the interview, Assange expounded on the thousands of Clinton emails WikiLeaks has released this past year, highlighting the findings that he personally found to be most significant. According to Assange, the most significant emails in the entire collection involve Clinton’s connections to Saudi Arabia and Qatar who she knew were funding the Islamic State and other radical jihadist groups in the Middle East. Despite this, Clinton accepted millions of dollars via the Clinton Foundation from these very same countries, often demanding payments of millions of dollars for access to her and her husband. Emails showed that a Qatari representative was given five minutes with Bill Clinton for a million dollars, while Hillary was paid twelve million dollars to attend a party hosted by the Moroccan government. Pilger remarked that the fact that “the notorious terrorist group called ISIL or ISIS is created largely with money from the very people who are giving money to the Clinton Foundation” was an “extraordinary” revelation.

The interview was also full of other scathing remarks against Clinton and her past crimes. However, Assange said that he personally feels “quite sorry for Hillary Clinton as a person” because she seems to have been “eaten alive by [her] ambitions, tormented literally to the point where [she became] sick.” He went on to say that Clinton is a “central cog” of the establishment, surviving as a point of connection between the Intelligence community, Wall Street, the State Department, and wealthy foreign donors like Saudi Arabia. Assange then highlighted another significant revelation from the Podesta emails, which exposed that Obama’s 2008 cabinet had been hand-picked by Citibank, one of the world’s largest banks.

Assange also responded to allegations that WikiLeaks is working on behalf of the Russians to support Clinton’s opponent Donald Trump. In response, he argued that Trump “would not be permitted to win” as the “establishment,” which includes the big banks, intelligence agencies, arms companies, foreign money, the media, and even journalists themselves, are “all united behind Hillary Clinton.” Assange then confirmed what many had already suspected, that Russia was not the source of the leaks and that Clinton’s accusations to the contrary were nothing more than “neo-McCarthy hysteria.” He reminded viewers that WikiLeaks has published 800,000 documents related to the Russian government, most of which are critical, proving that neither WikiLeaks nor Assange has any kind of relationship to the country.

The latter part of the interview revolved almost exclusively around Assange’s asylum in the Ecuadorian Embassy in London. Assange spoke out against the false charges against him, emphasizing the fact that he has never been charged with a crime and that the UN found that he was being “arbitrarily detained” due to US pressure to extradite him. Assange has long feared extradition to the US where he would likely face espionage charges and perhaps the death penalty. Indeed, Julian Assange is one of the most well-known casualties of the US’ horrendous and inexcusable war against whistleblowers. Though US politicians such as President Obama speak of the importance of “freedom of speech,” Assange’s situation, as well as that of Chelsea Manning and Edward Snowden, proves that freedom of speech in the US is only allowed as long as it doesn’t expose the many crimes of the US government.

This article (Assange Destroys Hillary Clinton In His Most Provocative Interview Ever [Watch]) is free and open source. You have permission to republish this article under a Creative Commons license with attribution to the author and TrueActivist.com