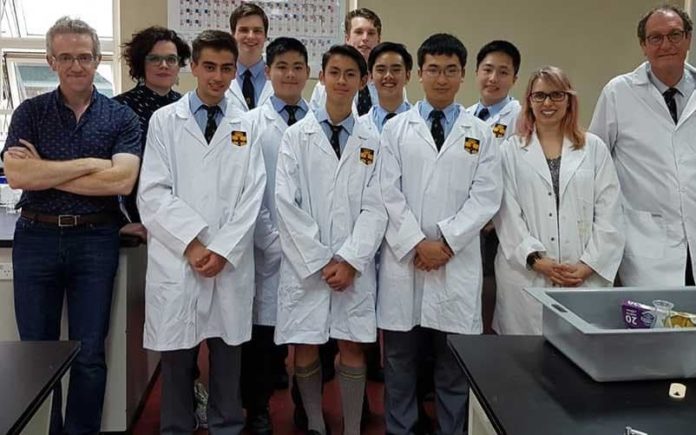 Turing Pharmaceuticals price-gouging CEO Martin Shkreli — the most hated man in the United States under fire for unscrupulously raising life-saving AIDS drug Daraprim’s price by 5,000% from $13.50 to $750 per pill last year — is furious after the news came out that a group of high school students in Australia have managed to recreate Daraprim for just $2. The students successfully replicated the drug’s active ingredient in their school laboratory.

Under the guidance of Dr Alice Williamson from the University of Sydney, and Associate Professor Matthew Todd from the Open Source Malaria consortium, 11 students (aged 16 and 17) from Sydney Grammar School synthesized pyrimethamine (an active ingredient in Daraprim) in their science laboratory and produced 3.7 grams of pyrimethamine for $20 to make their own version of Daraprim for $2. (In the United Stated, the same quantity would cost up to $110,000 at the current rate charged by Turing Pharmaceuticals).

Interestingly, Shkreli sells the life-saving drug for $750 a pill in the United States, while in most countries including Australia and Britain, the drug retails for less than $1.50 per pill. Dr Williamson remarked:

“I couldn’t get this story out of my head, it just seemed so unfair especially since the drug is so cheap to make and had been sold so cheaply for so long. I said ‘Why don’t we get students to make Daraprim in the lab’, because to me the route looked pretty simple. I thought if we could show that students could make it in the lab with no real training, we could really show how ridiculous this price hike was and that there was no way it could be justified.”

The teenagers, who called their project “Breaking Good,” said they were spurred to recreate the drug after Shkreli bought the rights to Daraprim and almost immediately increased the price from $13.50 to $750 a pill. To make their own Daraprim, they had to find a new way to manufacture pyrimethamine from the raw ingredients (due to patent laws and other restrictions), so they spent the past 12 months finding their own, yet safer way to create the drug.

Accusing Shkreli of being “an attention-seeking businessman” who forgets there are “people’s lives and livelihoods at stake,” Leonard Milan (one of the 11 students) told The Guardian:

“If you follow his overpriced method using toxic chemicals in an industrial lab, it’s easy. But the fact that we were able to substitute some really toxic gasses with simple school-available chemicals and do it so cheaply demonstrates the absurdity of some of his justifications for the price.”

“The morally bankrupt sociopath“, “the scumbag”, “the face of unapologetic profiteering from the suffering of humans” and “everything that is wrong with capitalism”, Shkreli is unimpressed and skeptical, but furious at the same time.

These kids who ‘made Daraprim’ reminds me of Ahmed who ‘made the clock’. Dumb journalists want a feel good story.

Ahmed lied about his “clock”, and the whole world bought it, too.

Labor and equipment costs? Didn’t know you could get physical chemists to work for free? I should use high school kids to make my medicines!

And never, ever compare your cook game to mine. Highest yield, best purity, most scale. I have the synthesis game on lock.

@nedavanovac lol how is that showing anyone up? almost any drug can be made at small scale for a low price. glad it makes u feel good tho.

Unfortunately, the students won’t be able to help patients in the United States, despite their best intentions. Professor Todd explained:

“While the drug is out of patent, Turing Pharmaceuticals controls its distribution and sale through a loophole called the ‘closed distribution model’. To take the drug to market as a generic, you need to compare it to Turing’s product. If Turing won’t allow the comparisons to take place, you’d need to fund a whole new trial.”

Dr Williamson insists they are not thinking of starting a business, but they do hope the project sends a message to pharmaceutical companies that expensive drug prices are not always justified.

“If high school students can produce the same drug with minimal training, for very low cost, how can you get away with charging $750 for an essential medicine to so many people who are already vulnerable?”

Daraprim is an anti-parasitic drug used to treat infections such as toxoplasmosis and malaria. The drug is used to treat people with low immune systems, such as people living with HIV, chemotherapy patients and pregnant women. It is on the World Health Organization’s list of essential medicines; however, Turing Pharmaceuticals continues to sell the only FDA-approved form of the drug in the United States.

This article (Australian School Kids Recreate Price-Gouging Pharma CEO’s $750-A-Pill AIDS Drug for $2) is a free and open source. You have permission to republish this article under a Creative Commons license with attribution to the author and AnonHQ.com.