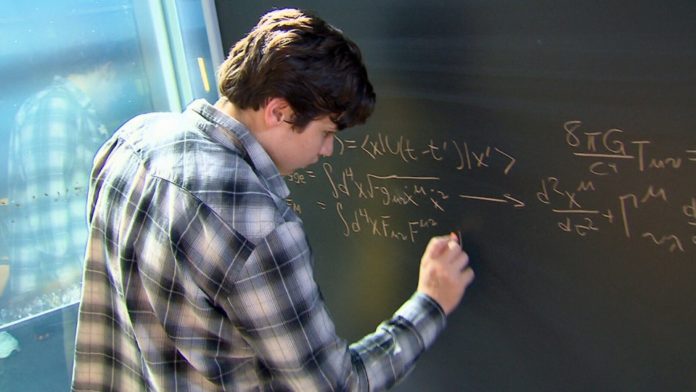 A boy labelled as severely autistic, and never to learn how to tie his own shoe laces, was placed into a special needs school after his diagnoses aged two. His mother, following her instinct, pulled her son out of the state-run special education facility to homeschool him, and by the age of 11, he entered college to study for his degree: condensed matter physics at Indiana University-Purdue University in Indianapolis. Said to have a higher IQ than Einstein, Jacob Barnett is working on a theory that would see him in line for a Nobel Prize. According to an email sent by Professor Scott Tremaine, “The theory that he’s working on involves several of the toughest problems in astrophysics and theoretical physics…Anyone who solves these will be in line for a Nobel Prize.” [1]

His IQ of 170 propels Barnett into a career as an astrophysics researcher, already giving lectures to his peers. He has also appeared in several news interviews, including 60 minutes, CBS, and the TIME magazine website. [2]

Now aged 17, his love for physics has him now researching Loop Quantum Gravity and Quantum Foundations at Perimeter Institute for Advanced Theoretical Physics in Waterloo, Canada, according to his mother’s website, listed as a PhD student. [3] At 15, he was the youngest student to be accepted into the Institute.

“Relying on the insights she developed at the daycare center she runs out of the garage in her home, Kristine resolved to follow Jacob’s “spark”—his passionate interests. Why concentrate on what he couldn’t do? Why not focus on what he could? This basic philosophy, along with her belief in the power of ordinary childhood experiences (softball, picnics, s’mores around the campfire) and the importance of play, helped Kristine overcome huge odds,” notes the blurb of his biographical accounts from his mother.[4] For someone who would never communicate with the world; that his mother was told he would never function in society, this young man can visualize complex problems by using what he calls the “fourth dimension.” It’s real. He says his mind is constantly buzzing, but mainly with numbers. As his parents discuss in their 60 Minutes interview, they watched their little boy withdraw from a world until they provided the stimulus for him that he loved: math and science.

[1] Wright, C. [Wake Up World] Autistic Boy With Higher IQ Than Einstein Discovers His Gift After Removal From State-Run Therapy. Retrieved from http://wakeup-world.com/2013/06/04/autistic-boy-discovers-gift-after-removal-from-state-run-therapy/