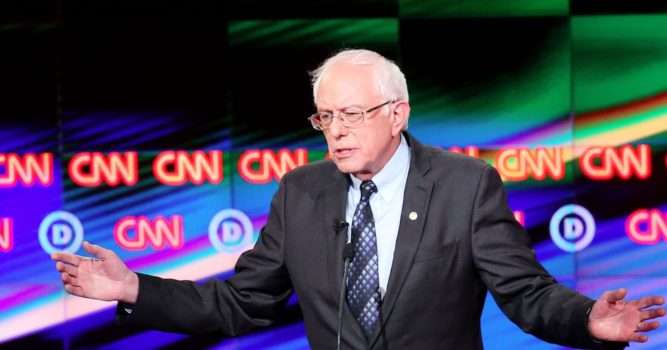 In a world where any person who speaks out against Israeli use of force or illegal occupation of Palestinian territories is automatically labeled a bigot. In a country where any candidate who opposes Israel has committed political suicide and in a world where Christians blindly support Israel no matter the cost because their Bible tells them they must, one politicians is taking unprecedented stances rarely, if ever heard before in US political discussions – never mind on the Presidential level.  This would be Senator Bernie Sanders and in case you were somehow unaware, yes he is Jewish.

At last nights Presidential debate Bernie Sanders and Hillary Clinton engaged in an extended debate over the policy of the United States in Israel, the behavior of the Israeli military and the implications this has on the people of Palestine. Judging by the reaction of the crowd in the room that night and in the opinions of many, Senator Sanders overwhelmingly dismantled Clinton over this issue. Here is a brief transcript of Senator Sanders descriptions of the United States relationship with Israel.

“we had in the Gaza area – not a very large area – some 10,000 civilians who were wounded and some 1,500 who were killed. Now, if you’re asking not just me, but countries all over the world was that a disproportionate attack? the answer is that I believe it was, and let me say something else…

…As somebody who is 100% pro-Israel, in the long run if we are ever going to bring peace to that region which has seen so much hatred and so much war, we are going to have to treat the Palestinian people with respect and dignity…

…right now in Gaza unemployment is s somewhere around 40%. You got a log of that area continues, it hasn’t been built, decimated, houses decimated health care decimated, schools decimated. I believe the United States and the rest of the world have got to work together to help the Palestinian people. That does not make me anti-Israel. That paves the way, I think…

…So here is the issue: of course Israel has a right to defend itself, but long term there will never be peace in that region unless the United States plays a role, an even-handed role trying to bring people together and recognizing the serious problems that exist among the Palestinian people…

…there comes a time when if we pursue justice and peace, we are going to have to say that Netanyahu is not right all of the time. All that I am saying is we cannot continue to be one-sided. There are two sides to the issue.“ Full Transcript: http://www.cnn.com/2016/04/14/politics/transcript-democratic-debate-hillary-clinton-bernie-sanders/


As previously mentioned Bernie Sanders is Jewish, he has also spent much of his childhood in Israel and  has family members currently residing there. Much like Hillary Clinton, he unequivocally believes Israel has the right to defend themselves. The difference comes in the fact that Bernie Sanders is the only politician anyone can remember speaking so loudly, standing up for the rights of the Palestinian people whilst simultaneously condemning Israel for their role in the conflict. Perhaps being Jewish gives Bernie Sanders a special cloak/defense to speak out against Israel that many do not have, but in any event he is taking an unprecedented approach to this issue, opening up the conversation in a way no one else has ever done on such a high level of government. As someone who admittedly is not a Bernie Sanders supporter: I say job well done Mr. Sanders, I applaud your honesty and bravery.

This article (Bernie Sanders – The Jewish Candidate Taking Unprecedented Stances Against Israel) is free and open source. You have permission to republish this article using a creative commons license with attribution to the author and AnonHQ. Join the conversations at www.anonboards.com