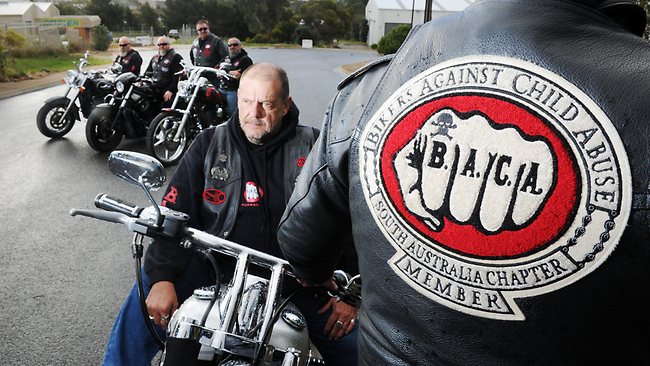 When a child is being abused, the situation is nothing short of terrifying in its truest sense of the word. Today, thousands upon thousands of cases present to the courts to hear the stories of children being hurt and abused, usually by a family member or someone they once trusted. Many more cases are unheard, unknown, or fall through the cracks of a system to strained to cope. This is where BACA comes into play. BACA stands for Bikers Against Child Abuse Inc. BACA is a tax-exempt non-profit organization dedicated to the protection of those children who have been abused in one form or another. They formed in 1995 to dedicate themselves to providing support, safety and aid to children who had been sexually, physically and emotionally abused. It is not a paid position for the bikers involved, but one where the sacrifice of their own time and sometimes their own funds is witnessed.

Essentially, BACA dedicate themselves to “protect and secure a child’s basic right to a happy childhood.” BACA provides where the system fails, and it isn’t an uncommon sight to see 20 or 30 bikes roll down the street to a child’s house to provide a presence and “brotherhood” to the child, letting them know that they now have a family who will attend to their basic needs. Two members are normally assigned to the child as case workers who will touch base on a weekly basis. The child will also have access to professionals such as therapists, who would otherwise not qualify, due to their inability to provide enough evidence to the systems already in place. BACA are widely recognizable in the community across the United States now, having formed multiple chapters where gaining membership is only through a stringent process that can take up to a year. The police also embrace this service, supporting them with a police presence when needed with initial visits to a child’s neighborhood. This usually takes form of talking with those who have questions, keeping the situation calm and informing people of what BACA does. Unfortunately BACA is dependent solely on donations. They refuse to implement annual dues as their belief is that no child should have to pay to feel safe. The main costs are usually for a therapist to assist the child, and some members have been noted to have contributed their own funds to assist. This is a good cause. This is something that takes off where government support finishes because the child is too scared to testify against their perpetrator, and hence doesn’t qualify for traditional support. BACA fills that void, and they also now have statistics that show a child is four times more likely to testify once being involved with BACA.

For more information, you can visit these links. http://bacaworld.org/faqs/ or https://www.youtube.com/watch?v=QnVbQuxok0I