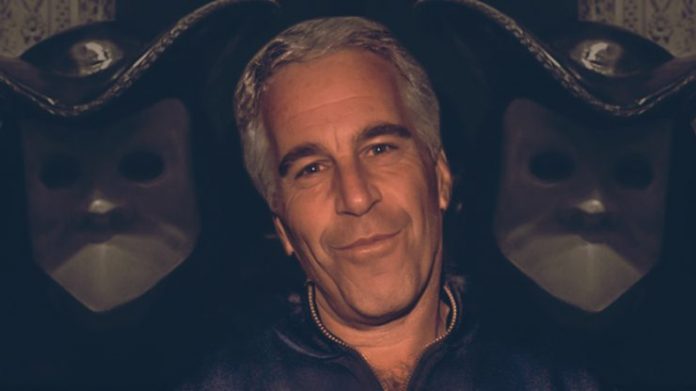 Days before he died, Epstein signed a will that lays out where he’s putting his money, and who’s calling the shots.

(ZH) — Two days before his untimely death in a Manhattan jail, Jeffrey Epstein signed a will listing over $577 million in assets – around $18 million more than stated weeks ago in court filings.

The assets were transferred to a trust as of August 8, ensuring that the details of how his fortune will be distributed are kept private.

Epstein listed his brother Mark as the lone heir and his longtime lawyer Darren Indyke and close friend Richard Kahn as executors, according to the New York Post, which obtained a copy of the will and trust filed in the US Virgin Islands.

That said, the document states that Mark only gets something if Jeffrey hadn’t created the will.

What’s more, Epstein’s heirs will have to split up whatever is left after a spate of accusers filed lawsuits against his estate.

“It’s pretty boiler-plate — it’s what we call a ‘pour-over will,” (embedded below) an estate planning lawyer told the Post, adding “It’s done that way for privacy reasons.”

“What is more unusual is the date, the fact that all of this was done just days before he died,” said the Post‘s anonymous source. “He probably knew he was going to take his own life” or may have thought “he could have been murdered in jail. He could have thought, ‘I need to get my ducks in a row.’”

Epstein’s personal property is broken down as follows (via the Daily Mail): 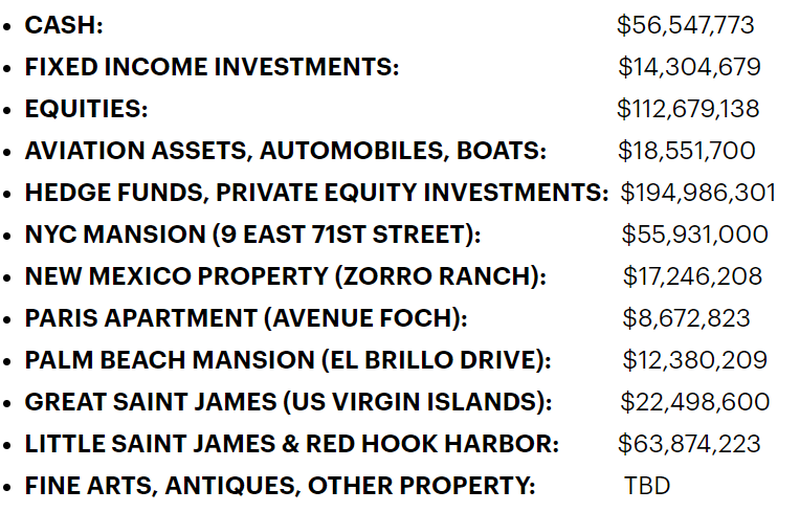 Once Epstein’s other assets are factored in, his estate is likely to exceed $600 million.

A few of those assets were noted in a court filing submitted by prosecutors for the Southern District of New York last month.

‘After conferring with law enforcement agents who have reviewed the materials from the safe, the Government has learned that the safe contained more than $70,000 in cash,’ read a filing by prosecutors arguing against granting Epstein bail.

‘In addition, the safe contained 48 loose diamond stones, ranging in size from approximately 1 carat to 2.38 carats, as well as a large diamond ring.’

It then noted: ‘The Government is currently unaware of whether the defendant maintains similar stashes of cash and/or jewels at his multiple properties, or in other locations. Such ready cash and loose diamonds are consistent with the capability to leave the jurisdiction at a moment’s notice.’ –Daily Mail

According to the New York Times‘ Ali Watkins (of letting that now-fired Senate security guy bang her for scoops fame), Danielle Ivory and Christina Goldbaum – the wealthy pedophile was trying to game the system until his dying breath, which was ruled a suicide.

Jeffrey Epstein, inmate 76318-054, hated his cell at the Metropolitan Correctional Center. It was cramped, dank and infested with vermin, so Mr. Epstein, long accustomed to using his wealth to play by his own rules, devised a way out.

He paid numerous lawyers to visit the jail for as many as 12 hours a day, giving him the right to see them in a private meeting room. Mr. Epstein was there for so long that he often appeared bored, sitting in silence with his lawyers, according to people who saw the meetings. While they were there, he and his entourage regularly emptied the two vending machines of drinks and snacks.

“It was shift work, all designed by someone who had infinite resources to try and get as much comfort as possible,” said a lawyer who was often in the jail visiting clients. –New York Times

Meanwhile, Epstein bought off other inmates by depositing money in their commissary accounts, according to the report.

He also seldom bathed and remained unkempt according to the Times – except photos of Epstein from the day he died revealed a shaved mustache, so chalk that one up to fake news or a fake Epstein – take your pick.

The night of Epstein’s death, there were 18 workers guarding the Manhattan Metropolitan Correctional Center (MCC), which holds around 750 inmates. Ten of those workers were clocking overtime, and one post was vacant according to records.

On 9 South, the special unit where Mr. Epstein was housed, there were two guards, one of whom was a former correctional officer who had volunteered for duty.

The two guards were supposed to check on Mr. Epstein every 30 minutes, but failed to do so for about three hours. At some point, the guards fell asleep, according to two Bureau of Prisons officials.

By the next morning, Mr. Epstein, 66, was dead. At 6:30 a.m., at least one of the guards discovered him in his cell, unresponsive and tinged blue, after he had hanged himself with a jail bedsheet, a prison official and a law enforcement official said. –New York Times

Once Epstein was discovered, a worker hit an body-worn alarm. Staff cut the sheets Epstein reportedly used to hang himself and attempted to administer CPR according to prison officials, however he was pronounced dead an hour later.