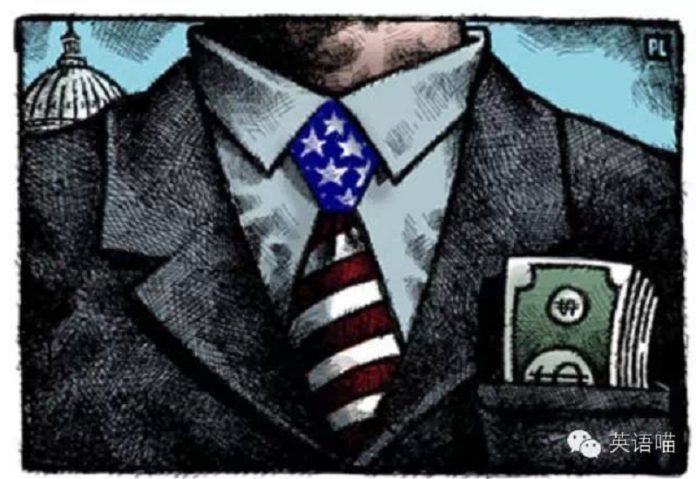 Politicians are all corrupt; those few who do initially join to “help the people” either soon get corrupted, or are mulched out of the system. None are more corrupt than those who are at the very top of American politics, the so-called “survivors.”

The Intercept’s Jon Schwarz has collated several quotes from politicians; some who made the mistake of admitting their own wrong-doings, and others who were “whistleblowing” on the corrupt nature of American politics. Have a gander at the following quotable quotes, as uncovered over two articles by Schwarz and The Intercept’s discerning readers:

“I gave to many people, before this, before two months ago, I was a businessman. I give to everybody. When they call, I give. And do you know what? When I need something from them two years later, three years later, I call them, they are there for me. And that’s a broken system.” — Donald Trump in 2015, attempting to explain that the system was corrupt by pointing out that he was the cause of some large part of said corruption. “Don’t vote for the guy who claims to want to help you; vote for ME, I’m already corrupt!”

“This is what’s wrong. [Donald Trump] buys and sells politicians of all stripes. … He’s used to buying politicians.” — Sen. Rand Paul [R-Ky.] in 2015, in response to Donald Trump’s admission.

Also: “I think many people have the mistaken impression that Congress regulates Wall Street. … The real truth is that Wall Street regulates Congress.”— Sen. Bernie Sanders [I-Vt.] in 2015.

“The banks — hard to believe in a time when we’re facing a banking crisis that many of the banks created are still the most powerful lobby on Capitol Hill. And they frankly own the place.” – Sen. Dick Durbin [D-Ill.] in 2009.

“Today’s whole political game, run by an absurdist’s nightmare of moneyed elites, is ridiculous — a game in which corporations are people and money is magically empowered to speak; candidates trek to the corporate suites and secret retreats of the rich, shamelessly selling their political souls.” — Jim Hightower, former Democratic Agricultural Commissioner of Texas, 2015.

“People tell me all the time that our politics in Washington are broken and that multi-millionaires, billionaires and big corporations are calling all the shots. …It’s hard not to agree.” — Russ Feingold, three-term Democratic Senator from Wisconsin, in 2015, announcing he’s running for the Senate again.

“Allowing people and corporate interest groups and others to spend an unlimited amount of unidentified money has enabled certain individuals to swing any and all elections, whether they are congressional, federal, local, state … Unfortunately and rarely do these people have goals which are in line with those of the general public. History well shows that there is a very selfish game that’s going on and that our government has largely been put up for sale.” – John Dingell, 29-term Democratic Congressman from Michigan, in 2014, just before he retired.

“Now [the United States is] just an oligarchy, with unlimited political bribery being the essence of getting the nominations for president or to elect the president. And the same thing applies to governors and U.S. senators and congressmembers. … So now we’ve just seen a complete subversion of our political system as a payoff to major contributors …” — Jimmy Carter, former President, in 2015.

“I can legally accept gifts from lobbyists unlimited in number and in value … As you might guess, what results is a corruption of the institution of Missouri government, a corruption driven by big money in politics.” — Missouri state Sen. Rob Schaaf, 2015.

“When some think tank comes up with the legislation and tells you not to fool with it, why are you even a legislator anymore? You just sit there and take votes and you’re kind of a feudal serf for folks with a lot of money.” — Dale Schultz, 32-year Republican state Legislator in Wisconsin and former state Senate Majority Leader, in 2013, before retiring rather than face a primary challenger backed by Americans for Prosperity.

Several months later, Schultz said: “I firmly believe that we are beginning in this country to look like a Russian-style oligarchy where a couple of dozen billionaires have basically bought the government.”

“I was directly told, ‘You want to be chairman of House Administration, you want to continue to be chairman.’ They would actually put in writing that you have to raise $150,000. They still do that — Democrats and Republicans. If you want to be on this committee, it can cost you $50,000 or $100,000 — you have to raise that money in most cases.” — Bob Ney, five-term Republican Congressman from Ohio who pleaded guilty to corruption charges connected to the Jack Abramoff scandal, in 2013.

“American democracy has been hacked. … The United States Congress … is now incapable of passing laws without permission from the corporate lobbies and other special interests that control their campaign finances.” — Al Gore, former Vice-President, in his 2013 book, “The Future.”

”When these political action committees give money, they expect something in return other than good government. … Poor people don’t make political contributions. You might get a different result if there were a poor-PAC up here.” — Bob Dole, former Republican Senate Majority Leader and 1996 GOP Presidential nominee, in 1983.

“I will begin by stating the sadly obvious: Our electoral system is a mess. Powerful financial interests, free to throw money about with little transparency, have corrupted the basic principles underlying our representative democracy.” — Chris Dodd, five-term Democratic Senator from Connecticut, in a 2010 farewell speech.

“I think it is because of the corrupt paradigm that has become Washington, D.C., whereby votes continually are bought rather than representatives voting the will of their constituents. … That’s the voice that’s been missing at the table in Washington, D.C. — the people’s voice has been missing.” — Michele Bachmann, four-term Republican Congresswoman from Minnesota and founder of the House Tea Party Caucus, in 2011.

“Money is the mother’s milk of politics.” — Jesse Unruh, Speaker of the California Assembly in the 1960’s and California State Treasurer in the 1970’s and 80’s.

“There are two things that are important in politics. The first is money and I can’t remember what the second one is.” — Mark Hanna, William McKinley’s 1896 Presidential Campaign Manager and later Senator from Ohio, in 1895.

“Across the spectrum, money changed votes. Money certainly drove policy at the White House during the Clinton administration, and I’m sure it has in every other administration too.” — Joe Scarborough, four-term Republican Congressman from Florida and now co-host of TV show “Morning Joe,” in the 1990’s.

“We are the only people in the world required by law to take large amounts of money from strangers and then act as if it has no effect on our behavior.” — Barney Frank, 16-term Democratic Congressman from Massachusetts, in the 1990’s.

“You have to go where the money is. Now where the money is, there’s almost always implicitly some string attached. … It’s awful hard to take a whole lot of money from a group you know has a particular position then you conclude they’re wrong [and] vote no.” — Vice-President Joe Biden, 2015.

“Money plays a much more important role in what is done in Washington than we believe. … You’ve got to cozy up, as an incumbent, to all the special interest groups who can go out and raise money for you from their members, and that kind of a relationship has an influence on the way you’re gonna vote. … I think we have to become much more vigilant on seeing the impact of money. … I think it’s wrong and we’ve got to change it.” — Mitt Romney, then the Republican candidate running against Ted Kennedy for Senate, in 1994.

“I had a nice talk with Jack Morgan [i.e., banker J.P. Morgan, Jr.] the other day and he seemed more worried about [Assistant Secretary of Agriculture Rexford] Tugwell’s speech than about anything else, especially when Tugwell said, ‘From now on property rights and financial rights will be subordinated to human rights.’ … The real truth of the matter is, as you and I know, that a financial element in the larger centers has owned the Government ever since the days of Andrew Jackson. … The country is going through a repetition of Jackson’s fight with the Bank of the United States — only on a far bigger and broader basis.” — Franklin D. Roosevelt, from a 1933 letter to Edward M. House.

“Lobbyists and career politicians today make up what I call the Washington Cartel. … [They] on a daily basis are conspiring against the American people. … [C]areer politicians’ ears and wallets are open to the highest bidder.” — Sen. Ted Cruz [R-TX], in 2015.

“When you start to connect the actual access to money, and the access involves law enforcement officials, you have clearly crossed a line. What is going on is shocking, terrible.” – James E. Tierney, former Attorney General of Maine, in 2014.

“Behind the ostensible government sits enthroned an invisible government, owing no allegiance and acknowledging no responsibility to the people. To destroy this invisible government, to dissolve the unholy alliance between corrupt business and corrupt politics is the first task of the statesmanship of the day.” — 1912 platform of the Progressive Party, founded by former President, Theodore Roosevelt.

Why would you need us “conspiracy nut-jobs” when politicians come out and admit it themselves? Indeed, many of these politicians seem to be implying that they are solely standing outside of this corruption, shining a light on it. Yet, over a HUNDRED years, DOZENS of politicians have come out speaking about the same problem… and, if anything, it has only gotten worse. For once, just believe them.

This Article (“Billionaires Have Basically Bought The Government” DOZENS of US Politicians Admit That Money Owns Politics) is free and open source. You have permission to republish this article under a Creative Commons license with attribution to the author(CoNN) and AnonHQ.com.