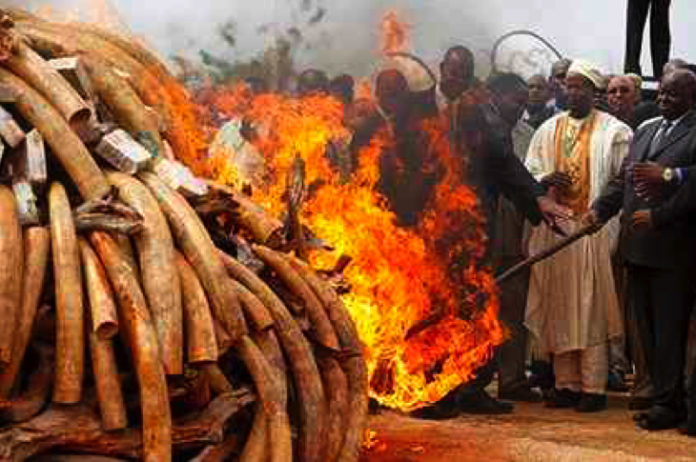 The Kenyan president set fire to 106 tons of ivory to protest the illegal ivory trade and say ivory has no commercial value.

The Kenyan government decided to make a statement about its stance on the illegal ivory trade on Saturday by seizing and burning 106 tons of ivory taken from elephant tusks and rhino horns. The pile of ivory is said to be the largest ever destroyed at one time.

Uhuru Kenyatta, Kenya’s current president, said, “A time has come when we must take a stand and the stand is clear…Kenya is making a statement that for us ivory is worthless unless it is on our elephants.”

Kenyatta’s decision and his statements have been met with controversy, as some say that the country could have sold the estimated $150 million of ivory and used the money to fund further development for the country and protection for its wildlife.

Others have claimed that Kenya’s porous borders and corruption are what truly allows for the continuance of the illegal ivory trade and that burning the ivory will make no difference to international gangs who take advantage of Kenya’s flaws.

The president has responded by saying that their decision to destroy the tusks and horns will show the world that Kenya believes that ivory should have no commercial value.

The tons of ivory are from over 8,000 elephants and 343 rhinos that were slaughtered because people still believe that ivory is necessary for specialty products and art. Africa is a hub for the ivory trade because of the large (but dwindling) population of both endangered African elephants and rhinos. In the 1970’s, Africa had 1.3 million elephants, but that number has decreased to only 500,000 today.

Kenyatta set fire to 11 pyres of the ivory on Saturday afternoon, using 20,000 liters of jet fuel and oxygen. Robin Hollister, the event’s fire manager said that it’s unknown how long it would take to burn all 106 tons because it’s never been done before.

Kenya will urge Africa to officially ban the ivory trade at the Convention on International Trade of Endangered Species later this year.

This article (Breaking: Kenya Burns 106 Tons Of Ivory From Elephant Tusks And Rhino Horns) is free and open source. You have permission to republish this article under a Creative Commons license with attribution to the author and TrueActivist.com