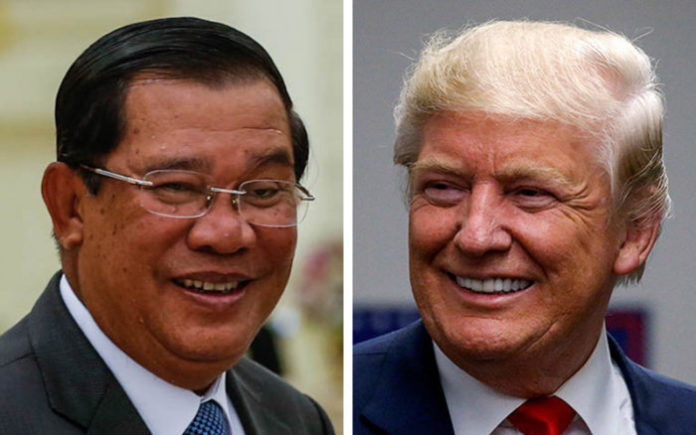 Cambodia is a country in Southeast Asia. It was once embroiled in a civil war backed by the U.S. just like in China, Korea, Vietnam and others in the region.

After the Second World War, the U.S. backed the Kuomintang-led government of the Republic of China hoping to defeat forces loyal to the Communist Party of China (CPC) in the Chinese Civil War. This war was primarily an ideological war. The U.S. had vowed to stop the spread of communism in East Asia. The Soviet Union on the other hand was determined to extend its influence in the region. By 1950, the CPC had emerged victorious over the Kuomintang government. The People’s Republic of China was born. It thereafter became a fully-fledged communist nation.

Having lost this strategic land to the Soviets, the U.S. jumped on Korea. The U.S. again was defeated as it failed to bring North Korea into submission. That war ended in armistice in 1953. Exiting Korea, the U.S. was planning another war in Southeast Asia, unable to stay away from fighting. On November 1, 1955, a little over two years when the U.S. left Korea, it invaded Vietnam. By the 1960s, President Lyndon B. Johnson had escalated the U.S. presence in Vietnam. The Communist-controlled north sustained aerial bombardment from the United States Air Force (USAF). All kinds of deadly weapons were used in North Vietnam. Chemical weapons, including Agent Orange, poisonous herbicides, napalm, and fleshettes were used by the USAF in Vietnam. As this brutal war was going on in Vietnam, the U.S. had a false notion that if it had neighboring Cambodia under its influence, it would easily win the Vietnam war. To get Cambodia, the U.S. had to spark unrest in the country.

The CIA as usual masterminded the unrest, and by the late 1960s, a U.S. surrogate government was installed in Cambodia. This U.S.-backed government, known as Lon Nol, came into power through a coup. The coup was financed by the United States. As the U.S. brutalities continued in Cambodia, the war in Vietnam also raged on. Sensing that defeat was eminent in both wars, the U.S. increased the use of chemical weapons and heavy bombs in both Cambodia and Vietnam.

The sheer brutality of the use of these dangerous weapons is reflected in the opinion of the then Chief of Staff of the USAF, Curtis LeMay who said, “we’re going to bomb them back into the Stone Age.”

But LeMay had to eat back his despicable words. The U.S. was unable to bomb neither Vietnam nor Cambodia into the Stone Age. The Khmer Rouge defeated the Lon Nol in 1975. In that same year, the U.S. ran away from Vietnam. The U.S. had destroyed many human lives and wasted over one trillion dollars of taxpayers’ money in today’s value in both wars. The U.S. later shamelessly claimed that it gave Cambodia a $274 million loan, mostly for food supplies and medical aid during the tenure of the Lon Nol government. It demanded that Cambodia repay the money back. Cambodia’s government body refused to repay the money.

Currently, the U.S. claims the value of the money has almost doubled — to $500 million — and Donald Trump is demanding that Cambodia return the money to the U.S.

But Cambodia’s Prime Minister Hun Sen has called Trump’s bluff. Mr Sen hit back at Trump, suggesting that the U.S. is supposed to compensate Cambodia for the crimes it committed in their country. According to Sen, the money the U.S. claimed to have given to Cambodia for humanitarian aid was rather used for weapons to kill the Cambodian people. Sen said it is highly immoral for the U.S. to even talk about what he described as “blood-stained and dirty money.” “They [U.S.] brought bombs and dropped them on Cambodia and now demand Cambodian people to pay. They dropped bombs on our heads and then ask up to repay. The U.S. created problems in my country and is demanding money from us. We also don’t demand that the U.S. pay for the damage and destruction caused by the war. We just want the US to be responsible for the problem of the debt,” Sen said furiously.

Aljazeera reports that Trump’s demand for the money has sparked outraged across Cambodia. Observers say this development could further escalate the already fragile relations between the two countries. Cambodia has never had a good relationship with the U.S. since the end of the war.

This article (Cambodia Blasts Trump Over Claims to Repay War Debt, ‘Dirty Money’ Killed Millions of Cambodians) is a free and open source. You have permission to republish this article under a Creative Commons license with attribution to the author and AnonHQ.com.