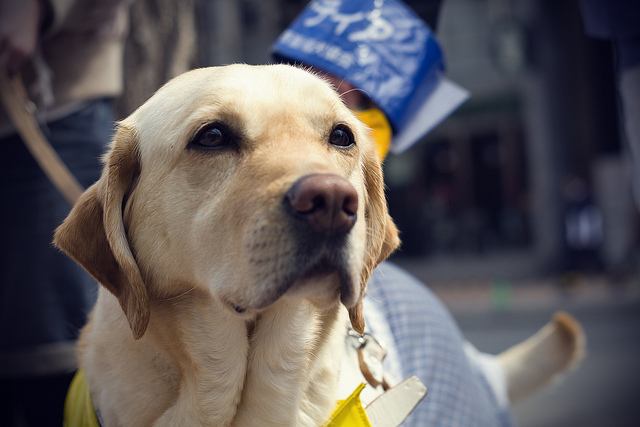 The relationship between man and dog goes back many tens of thousands of years. Although they may be descendants of the mighty wolf, dogs have stood by our side throughout the course of history.

Originally, dogs were domesticated and bred to help us go about our daily lives more easily – whether it be for hunting or pest control. However, in recent years, dog have proven to be not only faithful pets, but also the key to helping groups of people live relatively normal lives.

Guide dogs and hearing dogs, for example, help hundreds of thousands of people with hearing or sight disabilities live relatively independent lives. Meanwhile, in the medical sector, dogs are being scientifically trained to detect early stage cancer – even at stage zero – and blood sugar levels in diabetics.

A dog has 300 million scent receptors in his nose – compared to the 5 million present in a human nose. While a number of studies have proven that dog’s have the ability to sniff out cancer, can the same truly be said for low blood sugar?


In the last few years, the popularity of diabetes alert dogs has increased dramatically. However, although more and more diabetics are choosing specially trained dogs to alert them when their blood sugar levels drop dangerously low, we are still uncertain how effective they can be, according to Evan Los, a pediatric endocrinologist at Oregon Health & Science University who has studied their use.

“Though dog trainers and dog users are generally enthusiastic,” he notes.

Unlike their cancer sniffing counterparts, which are able to smell the odor of cancer, it is possible that the diabetes alert dogs are not actually “smelling” low blood sugar, but are instead reacting to other symptoms of hypoglycemia.

According to the InSitu Foundation, the leading experts in the field of training cancer detection dogs, a dog’s nose is so finely tuned, it is able to determine our emotional state. In addition to having 295 million more scent receptors than human, “the part of the dog’s brain that is dedicated to analyzing these odors is 40 times greater than ours,” according to InSitu.

In an effort to shine some light on the subject, a number of researchers have set out to determine if –and how – dog’s have the ability to detect low blood sugar in humans. In a study published in the journal Diabetes Care, researchers from the University of Cambridge discovered that a chemical found in our breath, could provide a flag to warn of dangerously-low blood sugar levels in patients with type 1 diabetes.

As part of the study, “Sankalpa Neupane and colleagues at the University of Cambridge measured the amounts of volatile organic compounds in exhaled breath in eight adult women with Type 1 diabetes,” reports NPR News.

The study revealed that upon giving the patients infusions to induce hypoglycemia, levels of isoprene – one of the most common VOCs in human breath – rose “strikingly”. Despite the study’s incentive, researchers did not test dog’s to see if they reacted to the chemical.

“All we have done is find one signal,” Dr. Mark Evans, the study’s lead investigator and a University of Cambridge lecturer, told NPR. “I suspect that dogs respond to a combination of cues including [VOCs], but also subtle behavioral cues.”

When asked to comment on the study and its results, Los said: “Their study didn’t test whether dogs have any ability to detect or alert to different concentrations of isoprene, so … whether this is a compound used by the dogs is unknown.”

In a second study, Evan Los and his colleagues studied eight patients with Type 1 diabetes and their alert dogs for one week. The aim of the study was to determine the accuracy rate of alert dogs when compared to both fingerstick and CGM blood sugar monitoring.

According to their findings, the dogs alerted their owners over three times more often during low blood-sugar episodes, than when blood sugar was normal. However, “just 12 percent of the 16 to 20 average weekly alerts occurred when the patient actually had hypoglycemia,” writes NPR News.

When compared to CGM blood sugar monitoring, in 73 percent of low blood sugar events the CMG alerted first – with an average of 22 minutes sooner than the dog. The reason for this startling difference could lie with the dogs ability to also detect high blood sugars or rapid changes in blood sugar, Los theorizes.

“Given that a CGM differentiates its alerts clearly, the dog is operating at a disadvantage,” he says.

According to a survey, alert dog users are very satisfied with their alert dogs (8.9 on a 10-point scale) and are fairly confident with their dogs ability to detect hypoglycemia (7.9/10). Although the results of the study are hardly surprising – alert dog popularity has been rapidly growing – it does confirm the importance of further research.

“Although it appears CGM outperformed trained dogs in this study, it is intriguing that dogs were able to detect some hypoglycemia,” Los said. “Perhaps understanding what factors impact dog reliability could help optimize dog performance.”

This article (Can Dogs Really Detect Low Blood Sugar in Diabetics?) is a free and open source. You have permission to republish this article under a Creative Commons license with attribution to the author and AnonHQ.com.