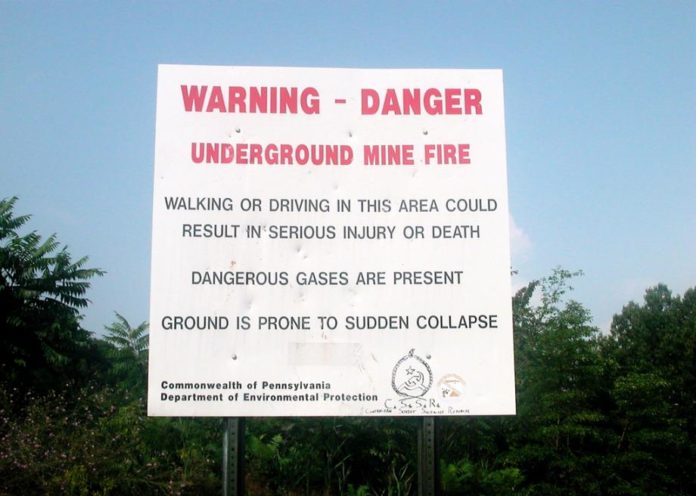 There’s a detour along Route 61 in Pennsylvania. Little would think to question the signs on top of the hill in the Ashland community, following the signs until reconnected with route 61 again.

Very few know about the history surrounding the detour – the road closures, the ruins, the ghost town of Centralia. It’s a true dystopian tale of government failure and the suffering of many that began in 1962.

Some argue that the ruins of Centralia can be attributed to some trash burned in an abandoned strip mine pit. The coal vein running near the surface which was connected to the mine became a gateway that saw the fire travel into the vein of coal. What started out as a tug-of-war with a difficult fire in 1962, became one of America’s largest mining disasters in history.

However, others argue that the coal fire from 1932 was never fully extinguished. Regardless, over the course of days and weeks in 1962, what thought to be an extinguished fire continued to erupt. Dousing with water didn’t help and nor did the next two decades of excavation, trench digging, backfilling and flushing the mines with water. Any effort to contain the fire failed, with a study in 1983 suggesting the fire could continue to burn for burn for up to two centuries and “could conceivably spread over an area of approximately 3,700 acres.”

Today, the ground is hot wherever you walk in Centralia, with temperatures reaching between 440 degrees Celsius underfoot. Sink holes, with toxic steam and smoke rising from the ground, remind the visitor that something is not right. The 1,100 residents had to be relocated due to the threats of hydrogen explosions and collapsing grounds in the 1980s. The township of Centralia has since inspired the horror film Silent Hill and many other movies of dystopian and sci-fi themes.

When the town was first founded in 1866, a time capsule was placed in a centennial vault due to be opened in 2016, but reported to have been opened in 2014, according to the clip below.

Centralia is not unique in its coal fire. The Tribune reported back in 2009:

“…Such unwanted coal fires rage or smolder in the United States, South Africa, Australia, China, India and beyond. They are burning in huge volumes in rural China and blazing in a district of India to such a great extent the flames from some surface coal fires are more than 20 feet high. Here in the U.S., they are burning in Pennsylvania, Kentucky, Colorado and Wyoming as you read these words.”

Not enough people understand or know about coal fires. Once burning, they take decades – or in Centralia’s case – centuries to extinguish. The emissions that pour into the environment are not short-lived and include methane and carbon monoxide.

Although our governments’ have time and again stated that it is too difficult to put these fires out, it really is time to come up with a final solution.

Sources: Off Roaders, Slate, The Tribune.

This article (Centralia Ghost Town: Underground Coal Fires Created this Silent Hill Inspiration, but Tragedy not Unique) is a free and open source. You have permission to republish this article under a Creative Commons license with attribution to the author AnonWatcher and AnonHQ.com.