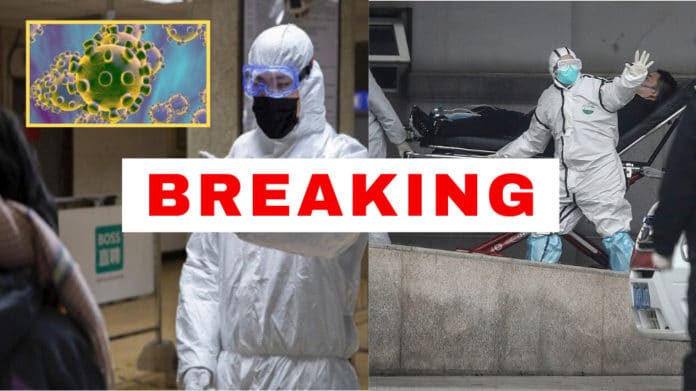 The Wuhan coronavirus—now called 2019-nCoV—is spreading rapidly at an alarming rate. There are an estimated 900 cases and 26 deaths in China alone in addition to confirmed patients in at least 9 countries with several potential cases inside the United States.

Texas is investigating a suspected case of the Chinese coronavirus while there are rumors of as many as nine suspected cases in LA and one confirmed in Chicago at the time of this report. The CDC also announced they are monitoring 63 people who came into contact with patient zero in the U.S. or the case in Chicago. Two suspected cases have been sent to the CDC from Minnesota.

U.S. lawmakers said health authorities expect to confirm a third case of coronavirus in the United States following a closed-door briefing in Washington between federal health officials and lawmakers according to Bloomberg.

New reports suggest that there are now two confirmed cases in France, marking Europe’s first cases of coronavirus. A 48-year-old man tested positive after passing through Wuhan. He is being treated in a Bordeaux hospital and came in contact with approximately 10 people between his arrival to France on Wednesday and his hospitalization. Little is known about the second case that is being treated in Paris.

Here’s what we know so far:

The unnamed 30-year-old man from Washington state is being treated by a robot in a guarded bio-containment room at Providence Regional Medical Center in Everett, Washington—a fact that illustrates the danger of this virus.

The U.S. citizen had returned to Seattle in the middle of last week after traveling to Wuhan on January 15, according to the CDC.

Earlier this week several major U.S. airports including those in San Francisco, New York, Los Angeles, Atlanta, and Chicago’s O’Hare began screening airline passengers arriving from central China for the virus. However, the confirmed patient in Chicago exhibited no symptoms at the time and therefore would not have been caught by an airport screening.

The CDC is sending 100 staffers to aid in the screenings at major airports.

There have also been reports of domestic flights in Wuhan being scanned for the virus by medical personnel in hazmat suits according to video posted by Yahoo News.

Other video uploaded to social media shows people filling the halls in a Red Cross Hospital in Wuhan, the city at the epicenter of the deadly viral outbreak. People can be seen covered by sheets and blankets in the video, leading some to believe that they are deceased.

The World Health Organization (WHO) has so far declined to call the outbreak a global health emergency while the Center For Disease Control (CDC) has issued a level three warning (Avoid Nonessential Travel) with the U.S. State Department, advising the avoidance of China and specifically Wuhan.

I am not declaring the new #coronavirus outbreak a public health emergency of international concern today. The Emergency Committee was divided over whether the outbreak represents a PHEIC. This is an emergency in China, but it has not yet become a global health emergency. https://t.co/16knaV4lMZ

The U.S. military has also warned its personnel in Japan to watch out for symptoms of the deadly pneumonia-like virus, according to an alert posted by Stripes.

If you must travel to China, the following precautions are recommended:

If you traveled to Wuhan in the last 14 days and feel sick with fever, cough, or difficulty breathing, you should:

Scientists have said that the coronavirus is similar to the Spanish flu and suspect it most likely came from snakes. The outdoor food market that is alleged to be the origin included over 100 different animals both live and dead, as TMU reported.

Symptoms include a fever, cough, shortness of breath, and breathing difficulties. However, according to Chinese state media, some are not experiencing any of these symptoms and are instead experiencing nausea, diarrhea, tiredness, bad concentration, headache, irregular heartbeat, chest pain, cornea inflammation, and muscular pains in the limbs, back, and waist.

The WHO has advised governments to be prepared for the disease and to be ready to test anyone with symptoms that has traveled to affected regions.

A top official at the U.S. National Institute of Health (NIH) revealed Wednesday that trials for a vaccine targeting 2019-nCoV could potentially begin within three months.

Anthony S. Fauci, the director of NIH’s National Institute of Allergy and Infectious Diseases, told Bloomberg Law that they are working with Cambridge, Massachusetts-based biotech company Moderna Inc. to develop a vaccine.

“We’re already working on it,” Fauci said. “And hopefully, in a period of about three months, we’ll be able to start a phase I trial in humans.“

In just over 72 hours, the number of those infected increased from 200 infected to over 900.  According to the Daily Mail, a report written by researchers from England, Scotland, and Florida believe that up to 350,000 people could potentially be infected in Wuhan by the beginning of February.

Many people suspect that the Chinese government is covering up the actual number of people who have thus far been infected by the virus. Some are even stating that the virus itself is far more dangerous and is currently mutating, according to posts on social media. One Wuhan patient stated on Twitter in Chinese that the virus that triggered such an epidemic is not a coronavirus but something else that is not included in the official report:

Wang Guangfa, a top medic who contracted coronavirus, says the deadly respiratory disease is so contagious it can be transmitted through the eyes and recommends for people to wear eye protective gear.

One journalist shared a picture on Twitter allegedly showing that all staff at hospitals are forbidden to discuss the latest development of the outbreak with family, relatives, and friends through email, phone calls, texts, WeChat, Weibo, or e-mail. This suggests that China is in fact trying to cover up something about the virus.

Sources in #Wuhan shared the message with me, which allegedly shows that all staff at hospitals are forbidden to discuss about the latest development of #WuhanCoronavirus outbreak with family, relatives and friends through email, phone calls, texts, WeChat, Weibo or e-mail. pic.twitter.com/LD6DVamZvH

A source on the ground told TMU that Wuhan is already running out of medical resources with hospitals and doctors asking for donations of supplies privately.

Last year in December, shortly before the first known case, scientists argued that the global community as a whole was not ready for a disease X in a pandemic preparedness exercise called Event 201. The program was a collaboration between the Johns Hopkins Center for Health Security, the World Economic Forum, and the Bill and Melinda Gates Foundation. Event 201 simulated a fictional coronavirus called CAPS.

Bill Gates previously warned in 2018 about a virus that would cause over 30 million deaths in 6 months.