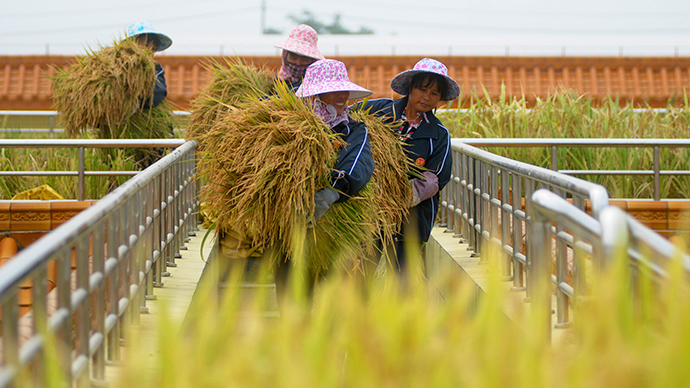 (China) In 2009, a permit was given by the Ministry of Agriculture to develop and genetically modify crops such as rice and corn . In 2014 this permit was revised and not extended . This pleases many environmentalists who had major concerns when those genetically altered products were for sale in the supermarket .

Why GMO’s in the first place ?
The Wuhan area practiced traditional agriculture with heavy use of pesticides .
The new genetically modified crops were going to cut back up to 80 % of those toxic products and in the mean time grow bigger yields ( up to 8% more yield).
This mystical super crop was developed at the Huazhong Agricultural University. It was still illegal to sell genetically-modified rice on the open market of china .

The withdrawal of the permit Part 1:

However in July, GM rice was found on sale in a large supermarket in Wuhan, which is just across the Yangtze River from the Huazhong Agricultural University, where the product was developed.The south China morning post the state television commissioned tests on 5 random sealed bags of rice , the result was that  3 of 5 were genetically altered, thus illegal according to the agreement which the manufacturer signed .

The crop, which was found, was one of two developed by Dr. Zhang Oifa at
the Huazhong Agricultural University and he states that either their product was being illegally reproduced by an outsider or deliberately put on the open market by angry protestors .He also said, “it was not impossible” for the seeds to be put on to the open market. The withdrawal of the permit Part 2:
And maybe worse than breaking the rules of the contract is .. Public opinion. “We believe that loopholes in assessing and monitoring [GMO] research, as well as the public concern around safety issues are the most important reasons that the certifications have not been renewed,”Wang Jing, a Greenpeace official based in Beijing, wrote in an email to ScienceInsider.
Activists and, generally, people are not fond of the idea of genetically tampering with organisms. There seems to be an inexplicable layer of controversy regarding all living things which are unnaturally reproduced . Some sort of fear of a super-crop spreading disease and misery whist in truth these are the fruits of science and over 3000 years of research and are generally created in ultra-controlled and safe environments . They might  just be our salvation in this ever overcrowding world. Without being hypocritical, because people still are beings with a right to feel bad about something and taking action against it.
So I guess you could say it is kind of a mixed feeling of irrational relief (that this technology will not be used in the near future ) and sadness ( this will probably be the end of genetic manipulation-research in China).
A Chinese professor at Nottingham university, Cong Cao is clear about one thing : this was a major blow dealt to the entire GM researching team  and he also fears for the future of genetic modification in general .
Cao also firmly believes that there is no logic involved with the judgment “Anti-Western sentiment has been judged more convincing than a raft of studies endorsing the merits of agro-biotechnology. Government support for GM food is dwindling fast, and it seems safe to say that the opportunity to commercialize GM rice – and with it the chance to help address some of China’s most urgent problems – is all but gone.”
And on a somewhat disturbing note ; the genetically manipulated corn which was used to feed livestock got way less media attention or even resistance.

End of the line: GMO production in China halted