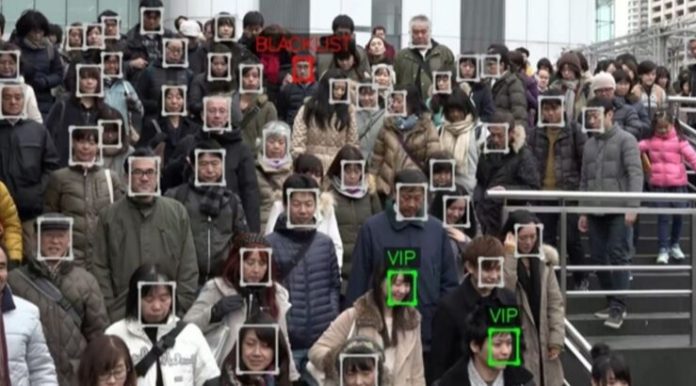 The Chinese government continues its Orwellian practices with the announcement that citizens will have to use facial recognition technology to access the internet (which is already highly fire-walled.)

This is all a part of China’s social credit system that will take effect on Dec. 1st.  After the law is in effect, Chinese citizens who want to have the internet installed at their houses or on their smartphones will be required to undergo a facial recognition process by Chinese authority to prove their identities, according to the new regulation.

This is significant because now the Chinese government will use the internet to rate citizens based on their daily behavior online.

Since 2015, Chinese citizens have been required to show their ID cards while applying for a landline or the internet. This new law is put in place to verify that the ID belongs to the person applying for services.

The new law was published on the Chinese Ministry of Industry and Information Technology (MIIT) website and distributed to all Chinese telecom carriers on Sept. 27th, which includes three demands be met, Epoch Times reports.

First, all telecom carriers must use facial recognition to test whether an applicant who applies for internet connection is the owner of the ID that they use since Dec. 1. At the same time, the carriers must test that the ID is genuine and valid.

Second, all telecom carriers must upgrade their service’s terms and conditions and notify all their customers that they are not allowed to transfer or resell their cell phone SIM card to another person by the end of November 2019.

Third, telecom carriers should help their customers to check whether there are cell phone or landline numbers that don’t belong to them but registered under their names since Dec. 1. For unidentified numbers, the telecom carries must investigate and close the lines immediately.

This comes on the heels of another Chinese pilot program which allows citizens to pay for subway/train travel using just their facial biometrics as Activist Post reported. This new system also compensates elderly Chinese in the city of Shenzhen, China, with a free ride — if they pay with their face  — providing incentives for using facial recognition technology.

China is planning to merge its 170+ million security cameras with artificial intelligence and facial recognition technology to create a mega-surveillance state. This compounds with China’s “social credit system” that ranks citizens based on their behavior, and rewards or punishes depending on those scores.

According to the latest report of U.S.-based market research firm IDC, China had spent $10.6 billion on video surveillance equipment in 2018. The firm adds that China’s spending is believed to reach $20.1 billion in 2023. A massive 64.3 percent of China’s spending in 2018 was spent solely for surveillance cameras. A worrying figure for the future of China.

IDC reported on Jan. 30th that it predicted China would have 2.76 billion surveillance cameras installed in 2022.

If that wasn’t bad enough, Chinese scientists have recently developed an artificial intelligence (AI) enabled 500 megapixel cloud camera that’s capable of panoramic capture of an entire stadium with the ability to target a single individual in an instant, Global Times reported.

The upgrade to facial recognition technology is developed by Shanghai-based Fudan University and Changchun Institute of Optics, Fine Mechanics and Physics of Chinese Academy of Sciences in Changchun, capital of Northeast China’s Jilin Province.

Fudan University and Changchun Institute of Optics aren’t the first researchers to advance facial recognition. There is also Shanghai-based YITU Technology which has evolved the facial recognition industry by being able to identify a person within a matter of seconds from a database of people, even if only their partial face is visible, CNBC reported.

China is quickly becoming Orwell’s worst nightmare, advancing its requirement and use of facial recognition technology. In protests, Hong Kong activists have begun shining laser pointers at facial recognition cameras to disrupt their function. Protesters have also taken additional measures, like spray painting camera lenses on the street or around government offices as Activist Post has reported.

This latest crackdown now requiring internet users in China to register their faces if they want to use the service is a huge step in creating a dystopian society. The remaining obvious question is how long until this type of facial ID requirement spreads to the U.S. and EU? We do know that the U.S. has wanted an “Internet ID Act” for quite some time, according to Amie Stepanovich, national security counsel for the Electronic Privacy Information Center in Washington. The fact that this process could now include facial recognition thanks to China rolling it out first is a horrifying nightmarish thought — welcome to 1984.