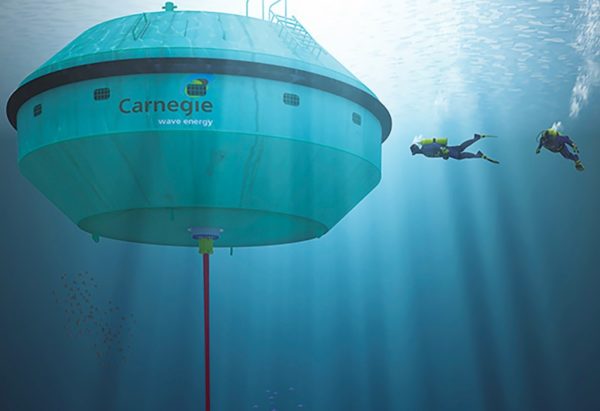 Wave power is the transportation of energy by wind waves, and the capturing of that energy to do useful work such as electricity generation, water desalination, or the pumping of water into reservoirs.

According to researchers, wave power is distinct from the diurnal flux of tidal power and the steady gyre of ocean currents. Although there have been attempts in the 1890s to use wave power technology to generate electricity, it is still not currently a widely employed commercial technology in the world. In 2008, the first experimental wave power was opened in Portugal at the Aguçadoura Wave Park. The farm was designed to use three Pelamis wave energy converters to convert the motion of the ocean surface waves into electricity. This was projected to be 2.25 Mega Watts in total installed capacity. The farm first generated electricity in July 2008 and was officially opened in September 2008. However, the farm was shut down due to the global financial crisis in 2008, as there were no funds to continue the project.

However, what the Portuguese did, inspired others to explore the technology despite the cost involved. The United Kingdom, the United States and Australia started also experimenting with wave power. Today, it is Australia who has become the first nation on Earth to have produced energy from wave power in large amounts. According to clean energy advocates, the Carnegie Wave Energy project, located in the city of Perth, Western Australia has just set a world record by completing 14,000 cumulative operating hours.

The facility is located precisely off Garden Island. The CETO 5 marine energy system is said to have generated clean renewable electricity for the last year. Apart from the energy it is producing, it is also desalinating the sea water, making it drinkable to households in the western part of the country.

The project was estimated to cost about $40 million. The Australian Renewable Energy Agency (ARENA) provided $13.1 million in funding for the project. Now, the country has started to benefit from the project as preparations are far advanced to connect the wave power to the national electricity grid. This will make Australia the first country in the world to connect wave power to a national grid.

The Chief Executive Officer of ARENA, Ivor Frischknecht told reporters that his organization is happy to have become involved in the wave power project, and that they are determined to fully explore other renewable energy sources in the country.

“ARENA is proud to help local companies, like [Carnegie Wave Energy Limited], develop new renewable energy solutions that have the potential to change the way the world generates electricity. We do this by providing Australian innovators with the support they need during the critical RD&D period, when patient funding is essential,” Frischknecht said.

They add that it is also likely to serve the population better than other energy sources, as it is estimated that more than 80% of the 24 million Australians live along the coast.

Now that the country has completed the CETO 5 system, it is targeting to start CETO 6 soon. The CETO 6 will have more generating capacity than CETO 5. Each CETO 6 unit has a targeted one megawatt capacity, which is four times the output of the CETO 5 unit. The power is transmitted onshore via subsea cable. The CETO 6 design is the product platform that will be used in commercial CETO projects. Many hope to see the completion of CETO 6 like the CETO 5. This will gradually turn the energy fortune of Australia around. Currently, majority of Australia’s energy come from non-renewables such as coal and natural gas. Origin Energy in Australia reports that 73% of the country’s energy source comes from coal, while 13% comes from natural gas.

This article (Clean Energy: Australia Connects World’s First Ever Wave Energy to its National Energy Grid [Video]) is a free and open source. You have permission to republish this article under a Creative Commons license with attribution to the author and AnonHQ.com.