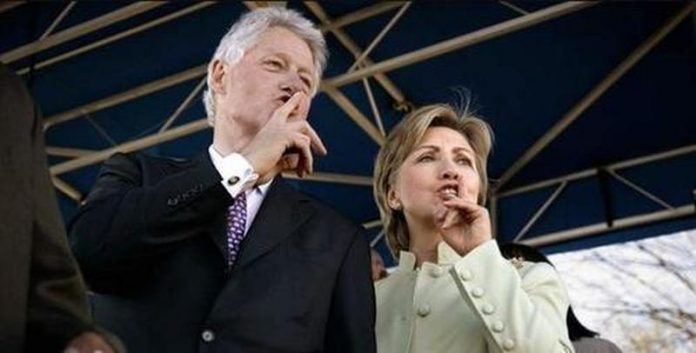 Authored by Mac Slavo via SHTFplan.com,

(Zero Hedge) Americans waking up to check Twitter this morning were greeted with the trending hashtag “#ClintonBodyCount.” This hashtag is referencing a long-running theory that the Clintons have been responsible for multiple murders to keep their corruption secret.

But the re-emergence of the trending hashtag has, of course, been blamed on “Russian bots.”

The phrase has since been used to link the mysterious deaths of people who were connected to Bill and Hillary Clinton in some fascinating ways. For example, the 1993 suicide of White House Deputy Counsel Vince Foster, and the fatal armed robbery of Democratic National Committee staffer Seth Rich in 2016.

When #ClintonBodyCount is trending on Twitter as a reaction to the story that Epstein “attempted suicide” you know people are hip to the game. They need him gone at all costs. 😱 pic.twitter.com/uFKsLk3EFu

Many Twitter users are asking others to check their own morality before defending the Clintons.

ANYONE denying the concrete connection, between Epstein and the Clintons, better look at themselves in the mirror and ask:

Am I really defending a criminal family who has been testified against by victims of sexual assault? #ClintonBodyCount

Making matters worse for the Clintons, the “Clinton Body Count” phrase was originally coined by writer Danny Casolaro in the late 1980s. Casolaro “committed suicide” in 1991, while working on a story supposedly involving an international cabal.

The establishment is rapidly attempting to place the blame on Russia for the hashtag’s popularity claiming that this is the work of “Russian bots.”

The elitists are currently trying to spin this into some kind of Russian conspiracy. It goes something like this: Russian President Vladimir Putin was so incensed by the knockout testimony given by former special counsel Robert Mueller on Wednesday that he cranked up the output of his “troll farms” and swamped Twitter with the hashtag as a distraction, according to RT.

Russia didn’t wait long to prove Mueller 100% correct about Putin interfering in our politics today with the #ClintonBodyCount trending hashtag.

It also didn’t take long for offended leftists to call for censorship and for Jack Dorsey to shut down the #ClintonBodyCount hashtag.

As RT further pointed out, Mueller did a good enough job failing to give Democrats the answers they were hoping for.  No amount of sneaky Russian meddling is needed to distract from Mueller’s testimony. Stammering through answers, seemingly forgetting key details from his report, and declining to answer any questions outside its scope, Mueller did a pretty good job deflating the expectations of Democrats hoping for some new Russiagate revelations.

Nonetheless, leftists are wholly attempting to keep the Russiagate hoax alive and well and if it takes blaming the newest trending hashtag on Russian bots, you can bet they’ll do it.