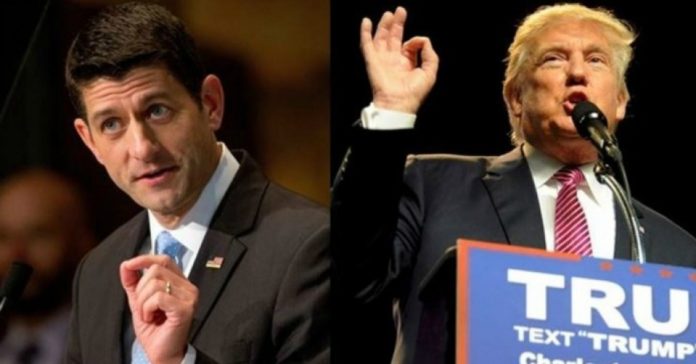 By Deirdre Fulton at commondreams.org

Republican control of Congress means much of the party’s regressive agenda—along with some of Trump’s radical proposals—could pass.

What now? Brace yourself.

At the end of October in Gettysburg, Pennsylvania, U.S. President-elect Donald Trump laid out what his campaign called a “100-day plan to Make America Great Again.”

The plan (pdf) came on top of multiple promises Trump made on the campaign trail about what he would do on his “first day in office.” Taken together, these vows represent a right-wing agenda that includes:

“This is life in the early days of a Trump presidency: economic shock, international instability, and constitutional crisis as Trump makes the presidency his plaything,” Washington Post columnist Dana Milbank wrote last week.

Some of Trump’s plans, including the infamous border wall with Mexico, may hit some roadblocks. But with the GOP retaining control of both the House and the Senate—and Trump’s potential cabinet picks comprised of conservative darlings from Rudy Giuliani to Sarah Palin—the path for implementation for many of these agenda items is clear.

As John Nichols wrote on Wednesday for The Nation:

Make no mistake, Trump now leads the Republican Party. And that party has in recent years developed an approach to power. When it does not control the executive branch, the GOP obstructs the Democrat who is in charge. When it has the executive and legislative branches in its grip, the GOP acts. Quickly.

Despite the whining of “Never Trump” conservatives who griped that the Republican nominee was politically impure, Trump accepted the nomination of a socially and economically conservative party that spelled out its agenda in a platform that People for the American Way’s “Right-Wing Watch” recognized as a more extreme version of the party’s previous programs: “a far-right fever dream, a compilation of pouting, posturing, and policies to meet just about every demand from the overlapping Religious Right, Tea Party, corporate, and neo-conservative wings of the GOP.”

[Newt] Gingrich correctly noted that the platform on which Trump was elected outlines an aggressive anti-labor agenda that parallels the worst of what Walker and other members of the GOP’s “Class of 2010” implemented in the first months of their tenures. The new president has criticized minimum-wage laws and supported anti-union “right-to-work” laws. Only fools would doubt that his fiercely anti-labor vice presidential running mate, Indiana Governor Mike Pence, will hesitate to implement the agenda (as a defining player on domestic policy) just as quickly as did Walker. Nor should they doubt any of the other outlandish and extreme commitments made by Trump during what the new president described in his victory speech as a “nasty” and “tough” campaign. Trump will have skilled and experienced allies, not just in Pence but in House Speaker Paul Ryan and Senate Majority Leader Mitch McConnell.

Ryan himself said Wednesday in the wake of Trump’s win: “Now…we will lead a unified Republican government,” and talked of working together toward Republican priorities.

In fact, those establishment allies have been laying this groundwork for years, said Charles Pierce in Esquire on Wednesday.

“Somebody finally climbed aboard the vehicle that the Republican Party had spent long years constructing, but that it somehow never built up the nerve to take out for a real shakedown,” Pierce wrote. “Turns out, it was more powerful than even they could have imagined it to be, and now we’re all along for the ride, god help us.”