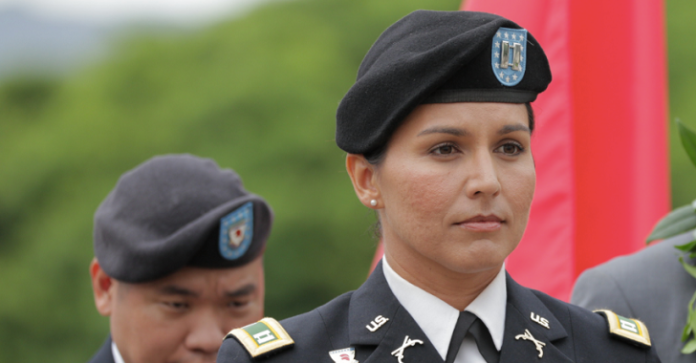 Democratic Congresswoman Tulsi Gabbard, the lawmaker who accused the U.S. government of funding and arming ISIS and introduced a bill to prevent it from happening in future, recently disclosed that she met with Syrian President Bashar al-Assad during her recent trip to Syria. The move has reportedly angered many of her fellow congressmen and women.

Upon returning from the war-stricken nation, Gabbard released the following statement in the form of a press release:

“My visit to Syria has made it abundantly clear: Our counterproductive regime change war does not serve America’s interest, and it certainly isn’t in the interest of the Syrian people.

“As I visited with people from across the country, and heard heartbreaking stories of how this war has devastated their lives, I was asked, ‘Why is the United States and its allies helping al-Qaeda and other terrorist groups try to take over Syria? Syria did not attack the United States. Al-Qaeda did.’ I had no answer.”

Initially, Gabbard allegedly had no intention of meeting Assad, as she stated in an interview with CNN’s Jake Tapper.

“When the opportunity arose to meet with him, I did so because I felt that it’s important that if we profess to truly care about the Syrian people, about their suffering, then we’ve got to be able to meet with anyone that we need to if there is a possibility that we can achieve peace,” she told Tapper.

The meeting with Assad is incredibly controversial because of numerous allegations by the U.N. that Assad has committed crimes against humanity.

Not surprisingly, the media has hyped up this visit as outrageous but has omitted some very glaring hypocrisies that arise as a result of Gabbard’s trip to Syria.

First, the Obama administration and Bush administration both drew serious allegations of war crimes, but if Gabbard had met with either of those former presidents, it’s doubtful anyone would have batted an eyelid.

Second, former Secretary of State John Kerry met with Assad in 2009, even though, after nine years in office, Assad was clearly responsible for all of the things western media has been relentlessly accusing him of doing since 2011.

Third, Gabbard’s meeting symbolizes the ridiculousness of America’s foreign policy decision-making system. A few hundred old men and women who have never been to Syria — nor care to go — sit in a room and deliberate a piece of paper deciding whether or not to drop million dollar tomahawk missiles on a relatively poor country. Even when these decision-makers are well aware of the horror their edicts will unleash, they are never required to visit the country, talk to its people, or understand the situation and better educate themselves. In the case of Syria, Congress wasn’t even required to approve the air campaign that began in 2014, as Obama authorized airstrikes without their approval anyway.

Gabbard’s move should be applauded — not ridiculed. Singling Assad out as some sort of mass-murdering psychopath while foreign leaders routinely meet with alleged war criminals such as Israel’s Binyamin Netanyahu, Saudi Arabia’s leadership, and Henry Kissinger, to name a few, is the epitome of U.S.-NATO arrogance.

Gabbard may have met with a mass murderer, but she also met with numerous people on the ground — the people who matter most. After doing so, she concluded:

“I return to Washington, DC with even greater resolve to end our illegal war to overthrow the Syrian government. I call upon Congress and the new Administration to answer the pleas of the Syrian people immediately and support the Stop Arming Terrorists Act. We must stop directly and indirectly supporting terrorists—directly by providing weapons, training and logistical support to rebel groups affiliated with al-Qaeda and ISIS; and indirectly through Saudi Arabia, the Gulf States, and Turkey, who, in turn, support these terrorist groups. We must end our war to overthrow the Syrian government and focus our attention on defeating al-Qaeda and ISIS.”

No one can criticize her strategy because, for the last six years, no one has even attempted it.

This article (Congresswoman Who Says U.S. Funds ISIS Just Got Back from Syria: Here’s What She Found) is free and open source. You have permission to republish this article under a Creative Commons license with attribution to Darius Shahtahmasebi and theAntiMedia.org.