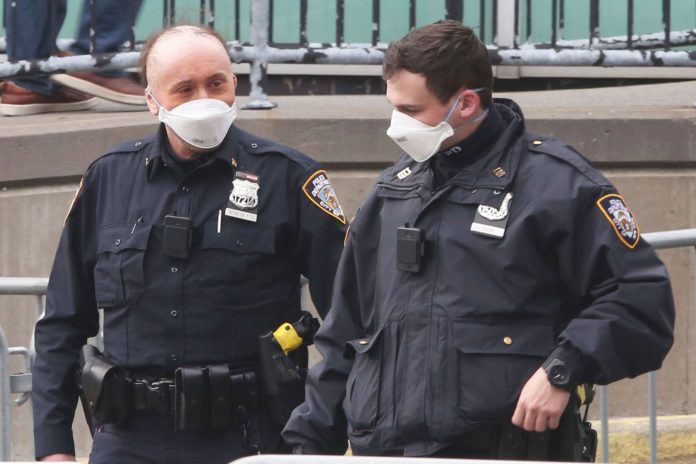 As New York City becomes a major epicenter for the COVID-19 coronavirus outbreak in the United States, thousands of the city’s police officers are out sick.

At a press conference on Wednesday, NYPD Commissioner Dermot Shea said that at least 236 members of the NYPD have tested positive for coronavirus and 3,200 additional officers have called out sick.

“We are backfilling patrols where we need to. We are taking on a variety of assignments,” Shae said, according to ABC News.

There are also 84 members of the New York City Fire Department who have tested positive for the virus.

NYPD struggling to supply cops with gloves, masks amid jump in coronavirus cases within force

Growing frustrations continue to increase among first responders over the lack of equipment during the coronavirus outbreak.

People who are working in many industries in the United States currently don’t have access to proper protective equipment even though they are still dealing with the public during a pandemic.

In many cases, this causes workers in these positions to become sick themselves and pass the illness on to the many people they come into contact with. This is especially true for healthcare workers and police.

Last week, Richard Prado tweeted a video showing multiple police and rescue workers in New York dealing with a man who had suddenly collapsed on the subway after loudly gasping for air.

It is not clear what the man’s condition is or if he was infected with the coronavirus, but the crew that was working with him did not seem to have any kind of gear to protect them.

Just got off the R train. A rider gasped for air loudly, and dropped to the floor. I immediately got off the next stop and begin filming. I'm not sure about the man's condition or if it was the #Coronavirus or not, but in reality we can't afford to take chances anymore.#COVID pic.twitter.com/41LSbRjo5u

Meanwhile, New York City Mayor Bill de Blasio announced that 300 non-violent, elderly inmates will be released from Riker’s Island Prison, to help prevent the spread of a growing outbreak at the facility.

“We want to identify anyone in those categories and get them released immediately,” the mayor said, according to The Hill.

Only inmates who meet certain conditions will be released. These conditions include having serious pre-existing health conditions and less than one year remaining on their sentence. Inmates who were charged with sexual assault or domestic violence will not be eligible for release. 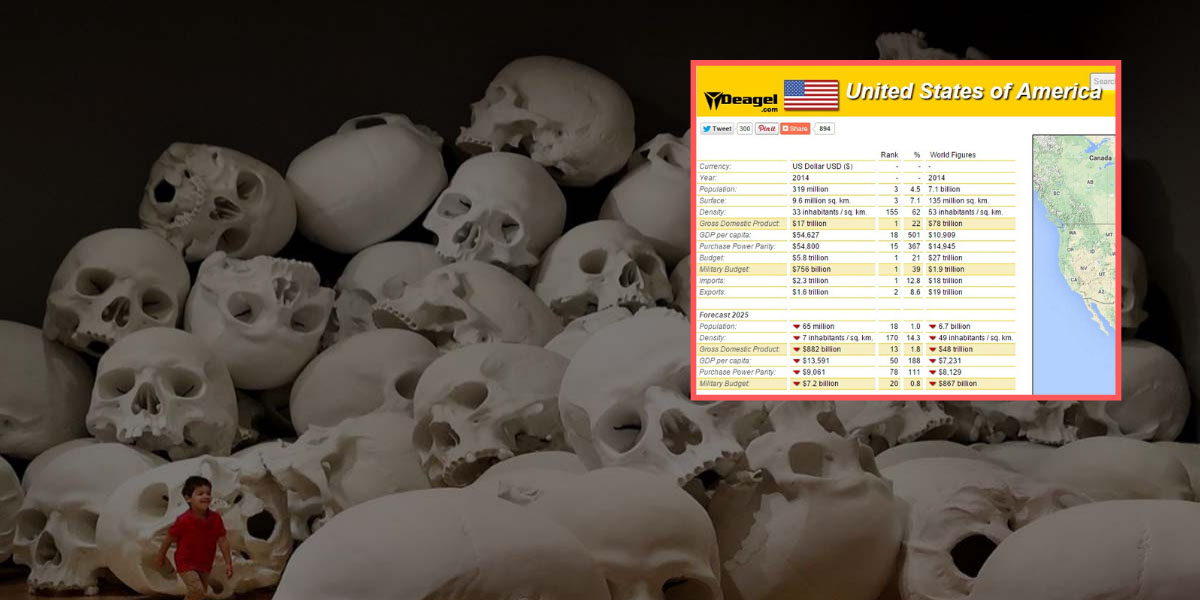 By 2025, populations around the world were forecast to decrease by a staggering 8 million people or more, according to Deagel publications.

Deagel.com: This inconspicuous website is largely unknown, even on social media, and is often assumed to have no official existence at all.

According to its own website, Deagel provides news and information about international military aviation and pioneering technologies. The website has articles dating back to 2003, but little is known about the real operators. Many online researchers have mistakenly mistaken this page for “deagle.com”, which is owned by Edwin Deagle.

In 2016, scientists at the British University of Oxford have also published a report and forecast that a 10 percent loss in the world’s population would go hand in hand with a catastrophic disaster. The numbers were estimated in a scientifically based special report known as global disaster risk.

The report, created by Oxford University’s Global Challenges Foundation and the Global Priorities Project, assessed the greatest threats to human population in the coming years, including a global pandemic, climate change and natural disasters. The team compiled the report, beseeching world governments to prepare.

“There are some things that are on the horizon, things that probably won’t happen in any one year but could happen, which could completely reshape our world and do so in a really devastating and disastrous way. History teaches us that many of these things are more likely than we intuitively think. Many of these risks are changing and growing as technologies change and grow and reshape our world. But there are also things we can do about the risks,” stated Sebastian Farquhar, director at the Global Priorities Project to Associated Press at the time.

Currently, the human population faces multiple high-risk situations, including climate change, the evolving coronavirus pandemic that has seen a virus spread from China at alarming rates across the world, and economic collapse as a result of the CCP’s initial concealment of the Wuhan coronavirus (COVID-19).

Current world figures anticipate millions in population growth lost and a sharp decline in Gross Domestic Product. The world population that currently sits at around 7.4 billion is set to drop to 6.9 billion in just 5 short years in 2025.

Ironically, the nation where the origins of the virus first appeared, China, is set to remain the same in population growth, while nations like Italy, Australia, and the US will see significant drops and potential economic devastation. India and Russia will also fare reasonable stability. 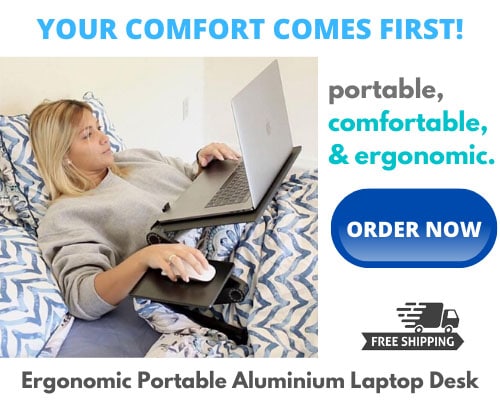 As a front group for the CIA, Deagel predicts that we’re only a few years away from a hellish nightmare.

This highly respected intelligence agency is giving a bleak outlook on the United States for the coming years, including a 78% population decline. In fact, it predicts a similar, catastrophic fate for the United Kingdom, Australia, Germany, Japan, and Denmark, and other allied countries (or see for yourself at http://www.deagel.com/country/forecast.aspx): 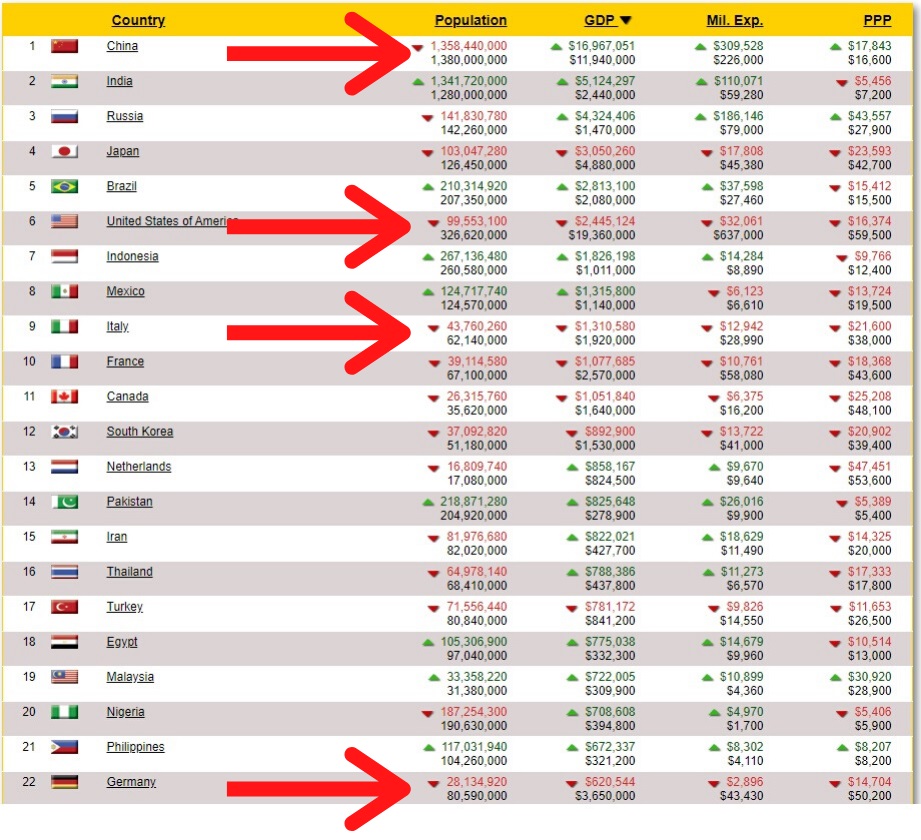 The figures are particularly alarming for the USA and Germany, where it is forecast that just under 1/3 of the population will be alive. According to Deagel.com, Italy and France will also be severely affected by a population decline, but here it is assumed that 2/3 of the population will still be alive. China and Russia are forecast to be hardly affected, and for Interestingly, the CIA front group even expects India, Pakistan, Mexico, Indonesia, Malaysia, Philippines to have a population increase.

Global military spending will drop by 90-95%

In terms of military budgets, Russia’s growth will increase from $ 79 billion to $ 186 billion, while the United States will have problems, most likely due to future inflation, with the budget falling from $ 637 billion to $ 32 billion. Similar results are forecast for the United Kingdom: a population decline of 7 million people and a decrease in the military budget from $ 56 billion to only $ 1.4 billion.

For comparison, the following are forecast numbers (screenshots from June 19, 2015) from 2015, which were somewhat more moderate and positive compared to today’s figures, but are almost unchanged for i.e. Germany with a forecast population decline of 48 million people (2/3 of it’s population): 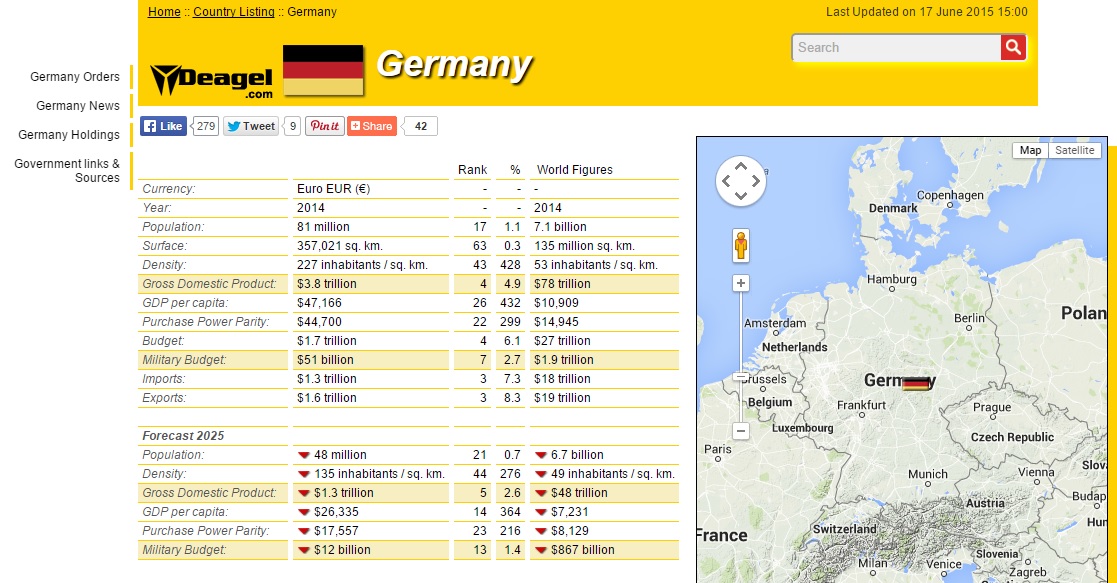 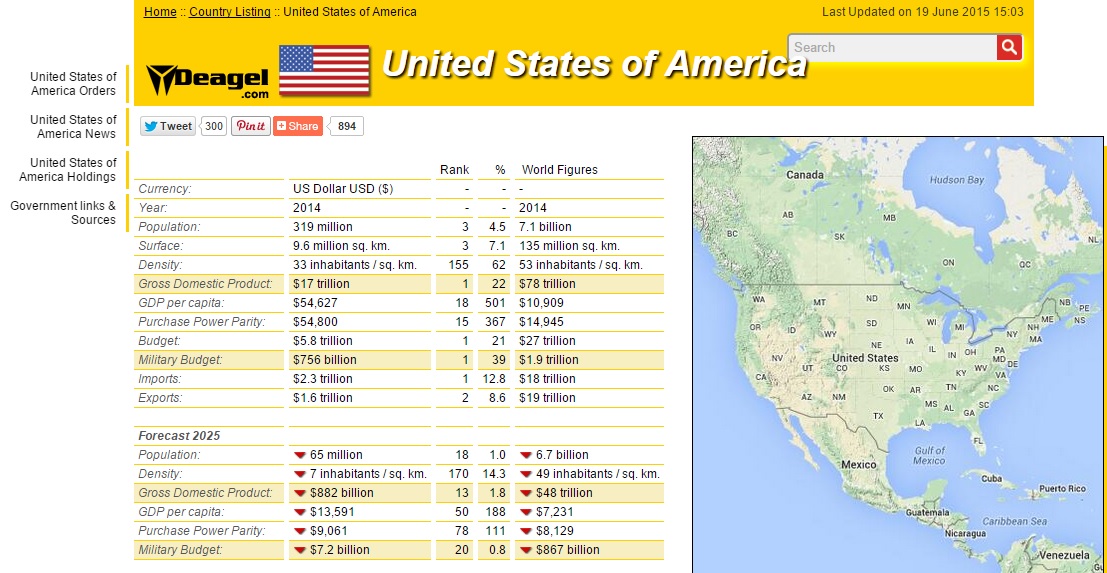 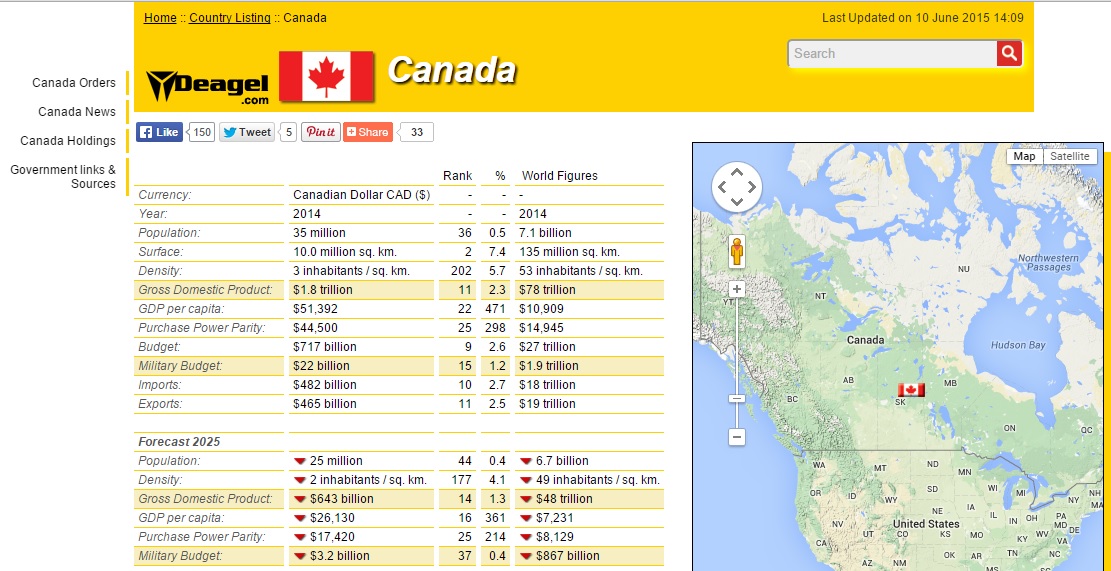 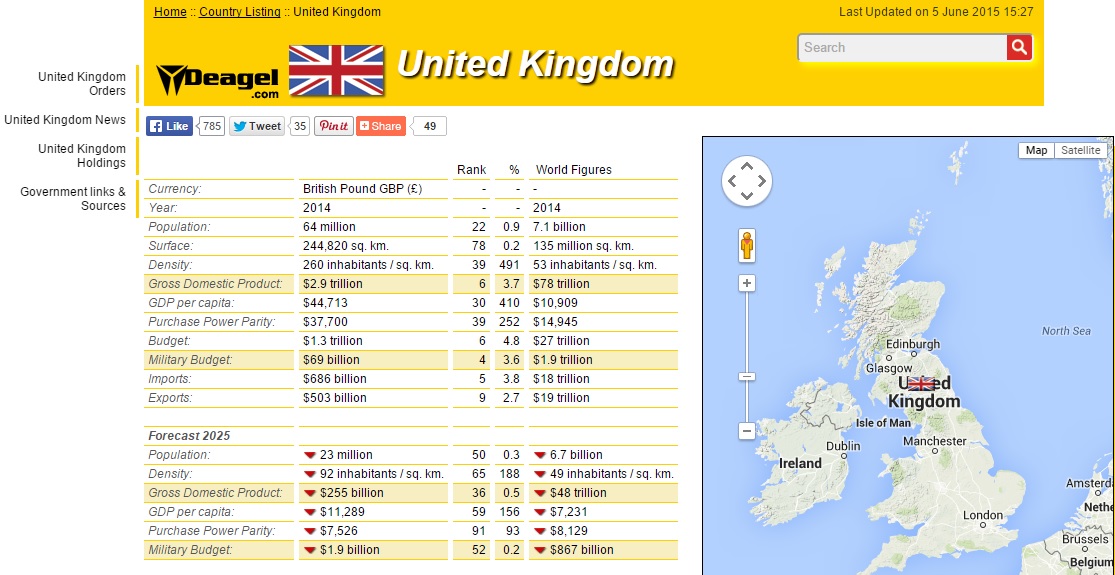 Population decline by how much?

According to these figures, the organization expects a massive population decline in the typical G7 countries, the European Union and others.

If you include all of the different scenarios that could involve this type of population decline: major physical / geographic events, diseases, etc.…. well, okay, maybe this could happen. BUT…

Then take a look at the BRIC countries, i.e. Brazil, Russia, India and China: 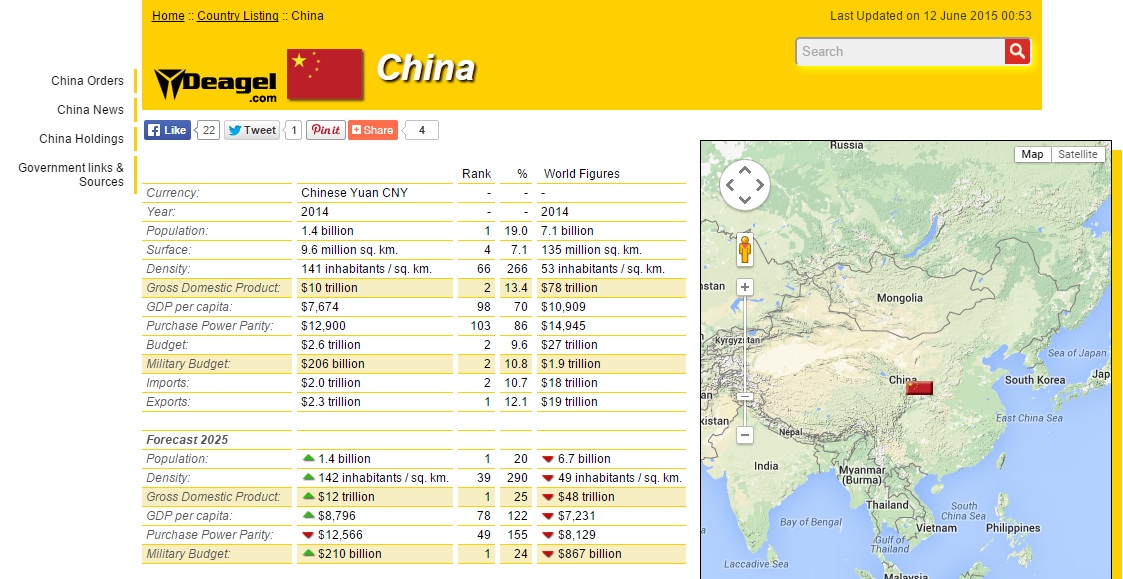 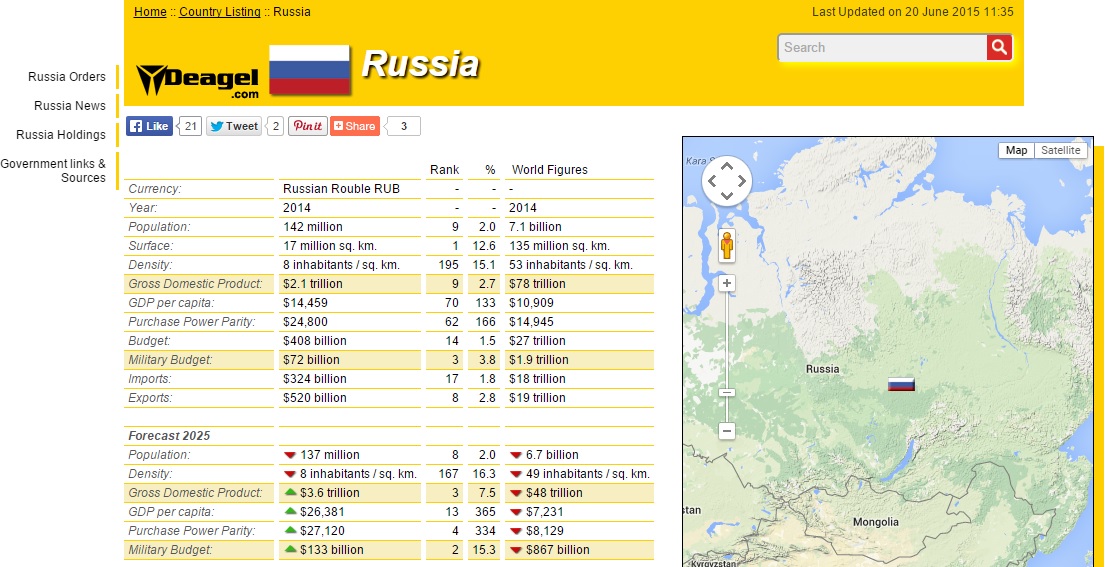 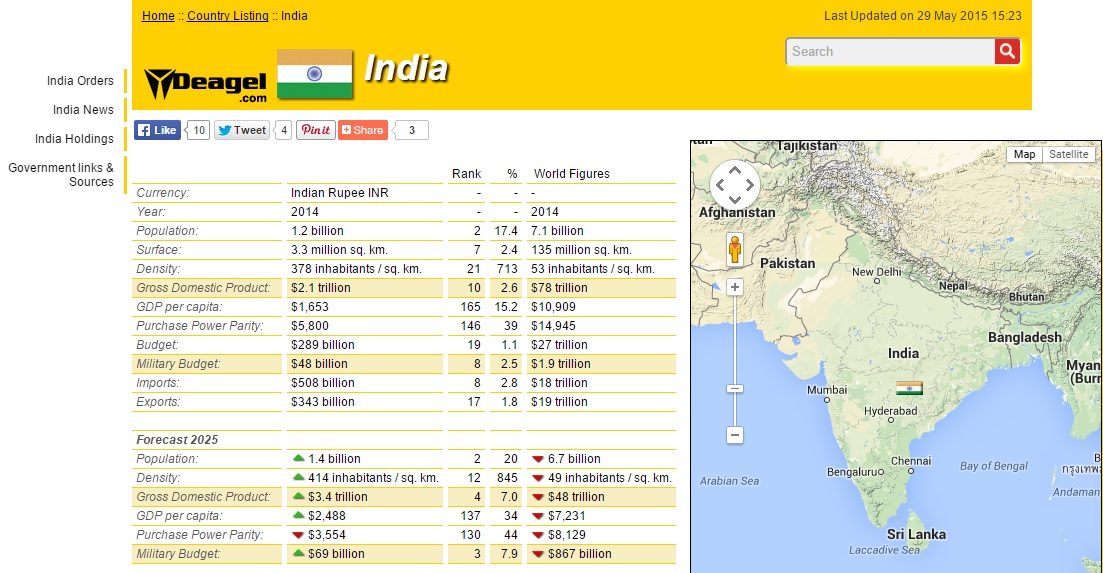 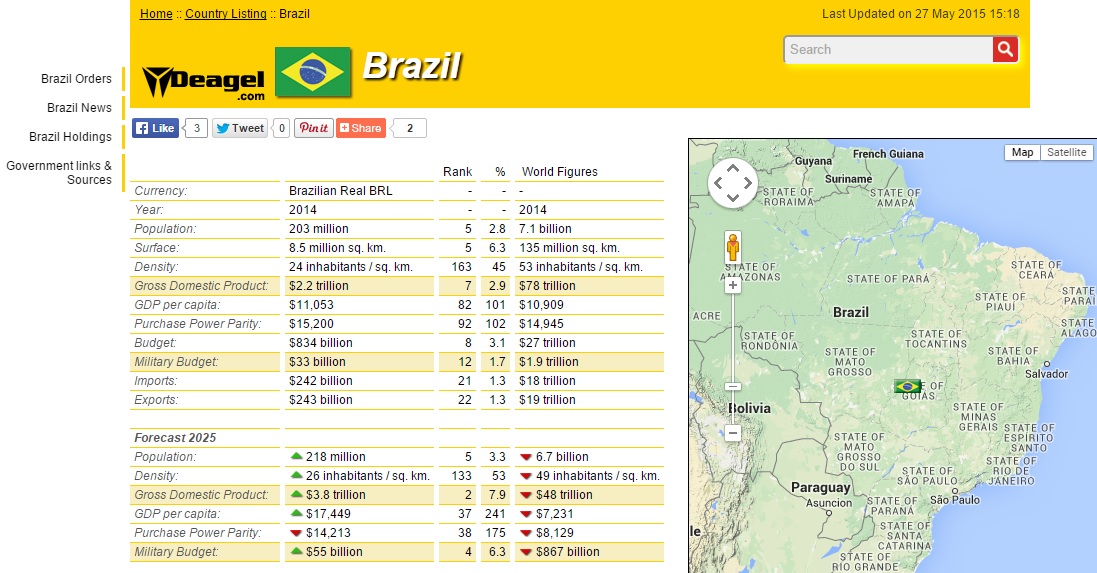 If you look at the list of countries, Africa, South America and most of Asia are apparently untouched or are said to have very little decline in their populations (with the exception of Japan!), And most Caribbean countries have no entries for 2025. On the other hand, they have NATO countries all saw significant declines – with the exception of Turkey. Very small declines are predicted for the Middle East, except for Israel, which is expected to experience a BIG decline. 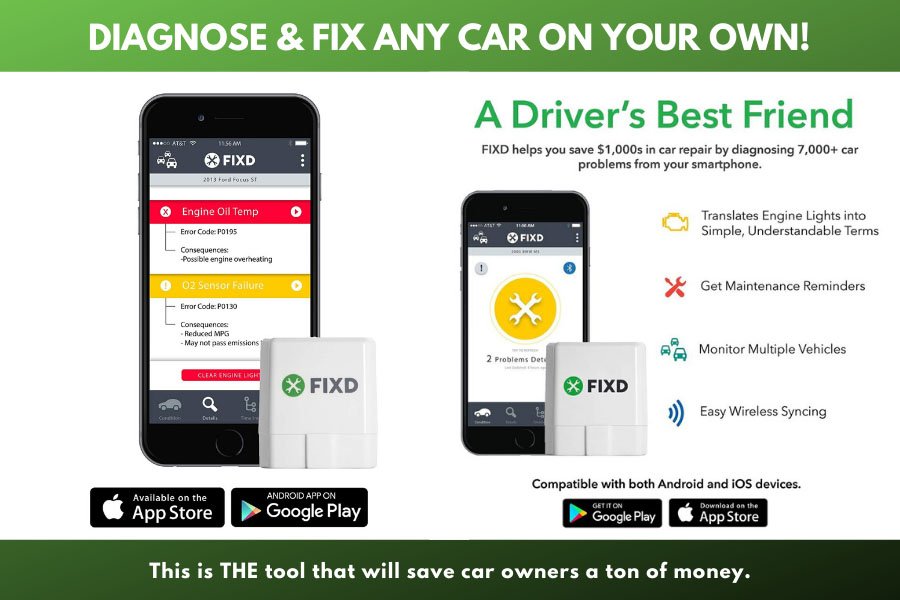 Of course, the question arises whether this information is trustworthy? Who or what is Deagel? Who is behind it? Is it an official institution?

Deagel’s reports, particularly investigations into North Korea, were also made available to the US President for daily information and briefings. In this way, Deagel provides information that is subsequently used by global intelligence agencies and governments.

Although its importance is downplayed heavily, WikiLeaks documents have shown that it was used as official reference material in a Stratfor report (Stratfor is one of the most important military-strategy think tanks-of the U.S.) about the technological capabilities of the People’s Republic of North Korea: https: // wikileaks .org / gifiles / docs / 26 / 2655808_dprk-marko-p-.html

Deagel is a group that gets their hands dirty and plays on both sides of the fence. Please note the publicly accessible list of Deagel partners below.

They do business with the Russian defense procurement agency, but are largely an American contractor with ties to the U.S. Navy, the NSA and the CIA, through Stratfor.

The power and influence of this association are simply breathtaking. It’s like the modern edition of Zapata Oil, a CIA front company led by George H.W. Bush, which in turn enabled much of the Air America ‘drugs for guns’ program in Latin America in the 1980s would have.

There is evidence that Deagel is pretty much the same type of organization as Zapata Oil at the time. Deagel initially did arms deals through US Ambassador Chris Stevens in Libya, but had started supplying al-Qaida in Libya and Syria at the time of his murder. Deagel was closely involved in the Benghazi attack in several ways, which will be dealt with in detail in a later article.

Deagel also has close ties to the so-called “Open Source Intelligence” business, which involves gathering information from publicly available sources for intelligence purposes. This means that Deagel and its partners (the connections listed) act as marketing companies for the CIA and sell news information to the highest bidder. Stratfor and Deagel at least distance the CIA from nefarious operations that could be dangerous to the US government, and particularly the CIA.