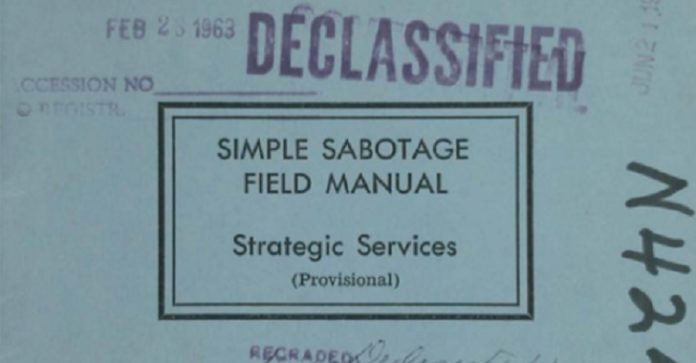 When most people think of CIA sabotage, they think of coups, assassinations, proxy wars, armed rebel groups, and even false flags — not strategic stupidity and purposeful bureaucratic ineptitude. However, according to a declassified document from 1944, the Office of Strategic Services (OSS), which later became the CIA, used and trained a curious breed of “citizen-saboteurs” in occupied nations like Norway and France.

The World War II-era document, called Simple Sabotage Field Manual, outlines ways in which operatives can disrupt and demoralize enemy administrators and police forces. The first section of the document, which can be read in its entirety here, addresses “Organizations and Conferences” — and how to turn them into a “dysfunctional mess”:

— Insist on doing everything through “channels.” Never permit short-cuts to be taken in order to expedite decisions.
— Make “speeches.” Talk as frequently as possible and at great length. Illustrate your “points” by long anecdotes and accounts of personal experiences.
— When possible, refer all matters to committees, for “further study and consideration.” Attempt to make the committee as large as possible — never less than five.
— Bring up irrelevant issues as frequently as possible.
— Haggle over precise wordings of communications, minutes, resolutions.
— Refer back to matters decided upon at the last meeting and attempt to re-open the question of the advisability of that decision.
— Advocate “caution.” Be “reasonable” and urge your fellow-conferees to be “reasonable” and avoid haste which might result in embarrassments or difficulties later on.

On its official webpage, the CIA boasts about finding innovative ways to bring about sabotage, calling their tactics for destabilization “surprisingly relevant.” While they admit that some of the ideas may seem a bit outdated, they claim that “Together they are a reminder of how easily productivity and order can be undermined.”

In a second section targeted at manager-saboteurs, the guide lists the following tactical moves:

— In making work assignments, always sign out the unimportant jobs first. See that important jobs are assigned to inefficient workers.
— Insist on perfect work in relatively unimportant products; send back for refinishing those which have the least flaw.
— To lower morale and with it, production, be pleasant to inefficient workers; give them undeserved promotions.
— Hold conferences when there is more critical work to be done.
— Multiply the procedures and clearances involved in issuing instructions, paychecks, and so on. See that three people have to approve everything where one would do.

Finally, the guide presents protocol for how saboteur-employees can disrupt enemy operations, too:

— Work slowly.
— Contrive as many interruptions to your work as you can.
— Do your work poorly and blame it on bad tools, machinery, or equipment. Complain that these things are preventing you from doing your job right.
— Never pass on your skill and experience to a new or less skillful worker.

The CIA is proud of its Kafkaesque field manual and evidently still views it as an unorthodox but effective form of destabilizing enemy operations around the world. Of course, so too might an anarchist or revolutionary look at such tactics and view them in the context of disrupting certain domestic power structures, many of which are already built like a bureaucratic house of cards.

It seems if any country should refrain from showcasing how easy it is to disrupt inefficient federal agencies, however, it would be the United States.

This article (Declassified CIA Manual Shows How US Uses Bureaucracy to Destabilize Governments) is free and open source. You have permission to republish this article under a Creative Commons license with attribution to Jake Anderson and theAntiMedia.org. Anti-Media Radio airs weeknights at 11pm Eastern/8pm Pacific. If you spot a typo, email [email protected].